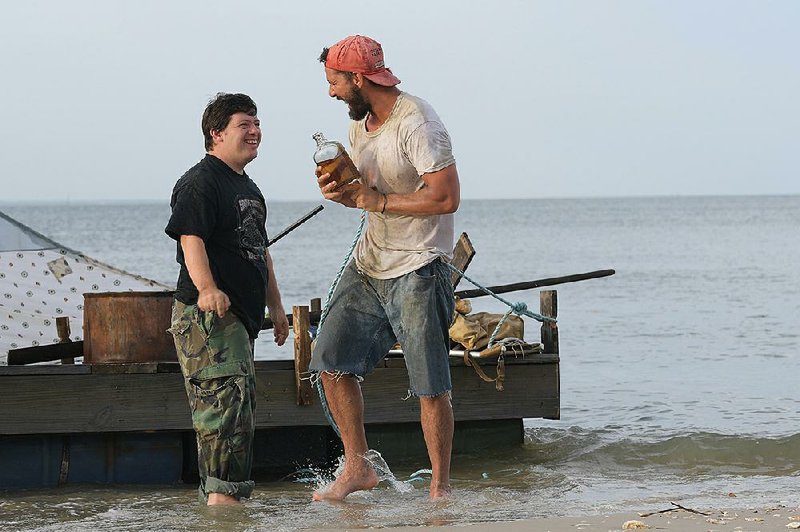 Zak (Zack Gottsagen) and Tyler (Shia LaBeouf) develop an easy rapport as they travel together in the feel-good sensation The Peanut Butter Falcon.

Talented, OK. A little self-impressed and a little too enamored of his image as an enfant terrible.

Rating: PG-13, for thematic content, language throughout, some violence and smoking

A poor person's Joaquin Phoenix, given to speaking in koans. A guy who at any given time might be putting on an act. Someone who makes you tired. Maybe you haven't given up on him, but his name in the credits doesn't exactly excite you.

Well, maybe it's not exactly a revelation, but people can be complex.

The Peanut Butter Falcon is beautiful. It's the sort of earnest, heartfelt movie you imagined Shia LaBeouf would never make.

But LaBeouf did make it, and he delivers a nuanced, tender performance that resists sentimentality -- a nice trick in a movie that's overtly family-friendly, sweet and full of what cynical film critics sometimes dismiss as "life lessons."

LaBeouf is a supporting player here behind the real star of the film, Zack Gottsagen, a 30-something with Down syndrome, a genetic condition that causes developmental delays and mild to moderate intellectual disabilities. Writer-directors Tyler Nilson and Mike Schwartz, whose previous credits include short documentaries about Free Solo subject Alex Honnold, met Gottsagen at a camp for disabled actors. The saw him in 2014's Becoming Bulletproof, a documentary about aspiring disabled actors.

Nilson and Schwartz decided to build a film around him, incorporating his sunny forthrightfulness into his character, Zak, a 22-year-old man with Down syndrome who dreams of a career in professional wrestling.

Basically it's a riff on The Adventures of Huckleberry Finn with Zak, escaping from the nursing home where he's been inappropriately warehoused on a journey to the North Carolina wrestling school run by his idol Salt Water Redneck (Thomas Haden Church). On the way he hooks up with LaBeouf's character, Tyler, a down-on-his-luck crab fisherman with a larcenous streak who's on the run from the cops and, more importantly, the dangerous tattooed Duncan (John Hawkes) and his henchman Ratboy (rapper Yelawolf), competitors whose traps he burned.

At first the partnership is one of circumstantial convenience, but as Tyler and Zak Huck-and-Jim through the coastal Carolinas, they begin to develop a rapport; one that's manifested in elaborate handshakes and playful teasing. These moments feel improvised and it's not hard to believe that we're watching LaBeouf and Gottsagen find common ground via Tyler and Zak.

As thin as the plot can get -- there aren't many surprises in this fairy tale -- it's a genuine pleasure to watch the give and take of these actors. And it's to the credit of the filmmakers that they never seem to be propping Gottsagen up or gingerly stepping around his limitations. Instead he's the very engine of the film, the captain of its cadences and timing.

It's a sweet story, but it's not like those where a disabled child is allowed to score a touchdown with his favorite college football team during a practice game. This is no pity in this project.

And there won't be any in this review either. The Peanut Butter Falcon is a beautiful movie but it's also an uneven one, and its sweetness doesn't sustain a meal. Soon Eleanor (Dakota Johnson), the nursing home employee sent to track down and return Zak to the facility before the authorities find out he's gone, has decided she can't beat the rebels, so she joins them on their raft. Of course they somehow form a family. (One line hurts -- when Tyler first meets Eleanor he wonders aloud if Zak isn't "living the American Dream, like a Mark Twain story." Ooof. Overt conventional Hollywood signalling alert.)

Corniness aside, The Peanut Butter Falcon is good-looking with a solid ensemble cast (including Bruce Dern as a typically irascible nursing home resident who abets Zak's escape) and a legitimately inspiring message. Even if we can't quite believe Zak can really achieve his dreams, we can believe Gottsagen can.

And there might even be some hope for Shia LaBeouf. 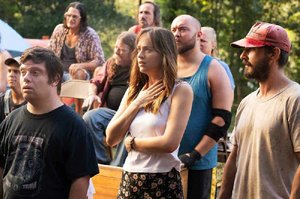 Zak (Zack Gottsagen), Eleanor (Dakota Johnson) and Tyler (Shia LaBeouf) somehow form a family when they light out for the territory in The Peanut Butter Falcon.