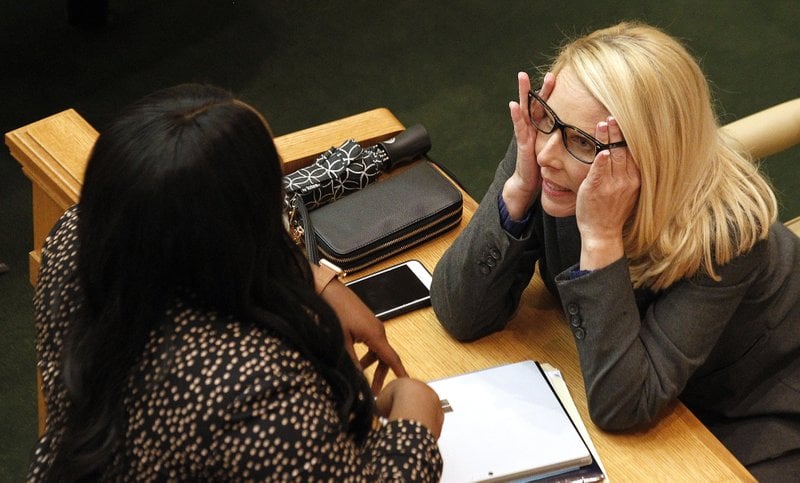 A federal judge on Friday refused to accept input from eight media organizations in a lawsuit challenging a 2017 law that animal welfare groups call the "Arkansas Ag-Gag" law.

The media organizations, led by the Reporters Committee for Freedom of the Press, filed a friend-of-the-court brief Aug. 12 to support the plaintiffs, led by the Animal Legal Defense Fund, in opposing the defendants' requests to throw the case out.

The defendants are state Rep. DeAnn Vaught, R-Horatio, and her husband, Jonathan Vaught, as owners of Prayer Creek Farm in Horatio, and Peco Foods, an Alabama-based poultry farm. They jointly complained that the media groups' filing shouldn't be accepted because the groups "have no insight to provide" and filed their brief too late.

The lawsuit alleges that Arkansas Code 16-118-113 provides protection to farm organizations from undercover investigations by groups concerned about the welfare of animals. The other plaintiffs are Animal Equality, the Center for Biological Diversity and the Food Workers Alliance. All are nonprofit organizations that say they are dedicated to protecting people, animals and the environment from the industrialization of the food production system.

"Plaintiffs are prepared to engage in First Amendment protected activities that would subject them to liability at the hands of the defendants," the welfare groups said in asking U.S. District Judge James Moody Jr. "to declare that liability unconstitutional" and prohibit its enforcement.

They refer to their lawsuit as a "pre-enforcement challenge" of a law that was designed to protect animal farmers from people who take pictures or make recordings to expose acts of animal cruelty. The "Ag-Gag Law," they say, is part of a nationwide effort to silence animal advocacy groups from speaking out against factory farms.

The law creates an avenue for civil litigation against anyone who releases documents or recordings from a nonpublic area of commercial property with the intent of causing harm to the owner.

The brief that the media groups sought to make a part of the record said they "have a powerful interest in ensuring that journalists are able to report on matters of concern to the public without facing unconstitutional impediments to their news-gathering activities."

Central to the ability of journalists to do their jobs effectively is "the ability of whistleblowers and other sources to inform journalists of dangerous, illegal, or unethical activities -- and to provide for documentation and evidence of those activities -- without fear of ... liability," said the rejected friend-of-the-court brief filed by the Williams and Anderson law firm in Little Rock.

Attorney Alec Gaines of that firm clarified in a filing Friday that the law allows for civil penalties, including monetary damages of up to $5,000 a day, but doesn't impose criminal penalties on violators.

In explaining why he refused input by the media groups, Moody said Friday in a docket entry, "The issues can be adequately presented by the parties, and the amicus would not assist the Court."