Graduate Hotel on track to open 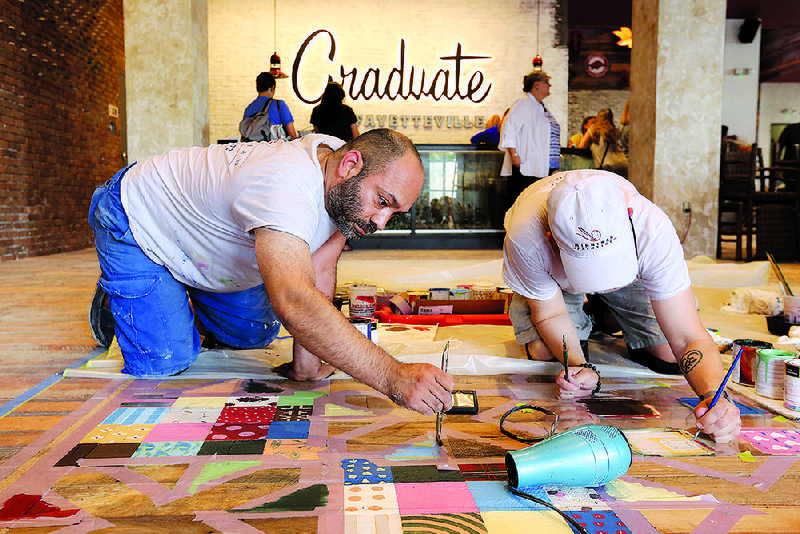 Ben Foch (left) and Paul Minnihan, with Minnihan Painting of Chicago, work Thursday on the hand-painted floor in the lobby of the new Graduate Fayetteville hotel.

FAYETTEVILLE -- The Graduate Fayetteville hotel in downtown Fayetteville officially opens Monday, meeting its pledge to be ready for business in time for this fall's Razorbacks football games.

On Friday afternoon the hotel was abuzz with workers scurrying about applying finishing touches. Painters worked on hand-painted floors that resemble gigantic quilts, others hauled colorful furniture about and set it just so, while others tended to plants hanging near what will be the hotel's bar.

Andrew Alford, chief creative officer for Graduate Hotels said all of the color, warm textures, Razorback motifs and art are intended to reflect Arkansas' diverse nature and all of the laid-back charms that go with it.

In December, Chicago's AJ Capital Partners bought The Chancellor Hotel from Southwind Hospitality Holdings for $31 million, according to county records. AJ Capital was issued a $1.2 million building permit to reconfigure the hotel, including work on the exterior of the property.

AJ Capital has been renovating the property for months, transforming it into one of its boutique Graduate Hotels. The brand features hotels in "dynamic university-anchored cities," according to the company. AJ Capital has 17 Graduate Hotels around the United States, including at Fayetteville, and has 15 others under development.

Alford said the hotel incorporates design elements that pay tribute to University of Arkansas history, innovations and notable graduates. He said it's not the intent of the Graduate Hotels to tell only the big stories of their respective locales but also the smaller, more intimate tales that make a region special. He called each hotel a love letter to the community it serves.

"We try to tell the story of everybody," Alford said.

The hotel has been operating under the Chancellor name while the renovations were nearing completion. The hotel was built in 1980, according to city records.

India Davenport, director of sales and marketing at the Graduate Fayetteville said about 30 rooms still need to be converted but the rest are complete and full, mostly with travelers arriving for the Fayetteville Roots Festival, which will feature urban music and culinary events.

The exterior of Graduate Fayetteville features a mural from Olson Studios of Indianapolis. The cardinal-and-white plaid mural gives the hotel a uniquely Graduate component. Alford explained that each Graduate Hotel features a unique plaid pattern.

After the renovation is complete, the hotel will boast 234 guest rooms, 28 more rooms that the previous 206.

In addition to its standard room offerings, the Graduate Fayetteville will have penthouse king and penthouse queen rooms along with the Washington Suite, Wings Suite, Tusk Suite, Old Main Suite, Family Suite and Key Suite.

The hotel's lobby has been completely reworked into an open floor plan that includes Poindexter, the Graduate Hotels' signature cafe, which offers breakfast, lunch and dinner fare, and functions as a bar. The renovation of event spaces and the pool are nearly complete.

The standard rooms in the Graduate Fayetteville are filled with Arkansas-themed touches, Alford explained. The camouflage carpet is intended to reflect the state's natural beauty but also its innate hipness -- as camouflage is considered trendy, and seen in fashion magazines and on runways in Paris.

The drapes in the rooms are the product of a French fabric house, their vibrant colors intended to reflect Arkansas' artistic history and future. A red headboard is a nod to the silhouette of Old Main on the UA's Fayetteville campus.

Even the bathrooms have an Arkansas icon, featuring a painting of Gil Gerard, Little Rock-born actor famous for playing Buck Rogers in the 25th century film and TV franchise, in his iconic white spacesuit and armed with a ray gun.

Kelly Way, associate professor in the hospitality management department of the Dale Bumpers College of Agricultural, Food & Life Sciences at the University of Arkansas, Fayetteville, said the Graduate Hotels are filled with atmosphere and details that make them stand out to visitors.

"They have an extra-warm, happy, fuzzy feeling," Way said about the chain.

The rooms, she said, are painstakingly appointed and themed to match their respective communities. She noted that the rooms couldn't be any more different from standard hotel accommodations, which are typically aimed at business travelers.

"When the person making the visit is actually paying for the trip, this is the sort of room they're looking for," Way said.

In 2011, the hotel near the city square on East Avenue was sold to Southwind Hospitality Holdings for $3.8 million. The property was named The Chancellor and underwent significant renovations valued at nearly $17 million at the time.

Before Southwind bought the property, former owners John Nock and Richard Alexander, Northwest Arkansas real estate developers, had a $16.2 million loan on the hotel, then called The Cosmopolitan, through Rogers-based bank ANB Financial. Federal regulators closed ANB in May 2008.

The Federal Deposit Insurance Corp. later created ANB Ventures to deal with ANB's outstanding loans. ANB Ventures foreclosed on the property in the spring of 2010, and a court-appointed receiver was assigned to keep the hotel open.

In June, Ike W. Thrash, along with some of his business holdings, sued Southwind, along with Schulte Hospitality Group and Darryl Schulte Jr., for breach of contract. Thrash argued when he sold his interest to Schulte Hospitality in late 2017, that it included a proviso that the hotel couldn't be sold to AJ. Capital Partners "in the immediate future."

Schulte has filed a motion that the lawsuit should be dismissed, contending that it's the wrong venue and that it mirrors a similar dust-up between the groups now in court in Kentucky. A Washington County judge has yet to rule on the issue. 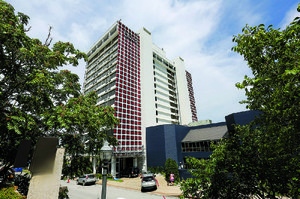 Photo by NWA Democrat-Gazette/DAVID GOTTSCHALK
Work is nearing completion on the exterior of the Graduate Fayetteville hotel near the Fayetteville city square.