Sheridan District Teacher of the Year spreads love for science 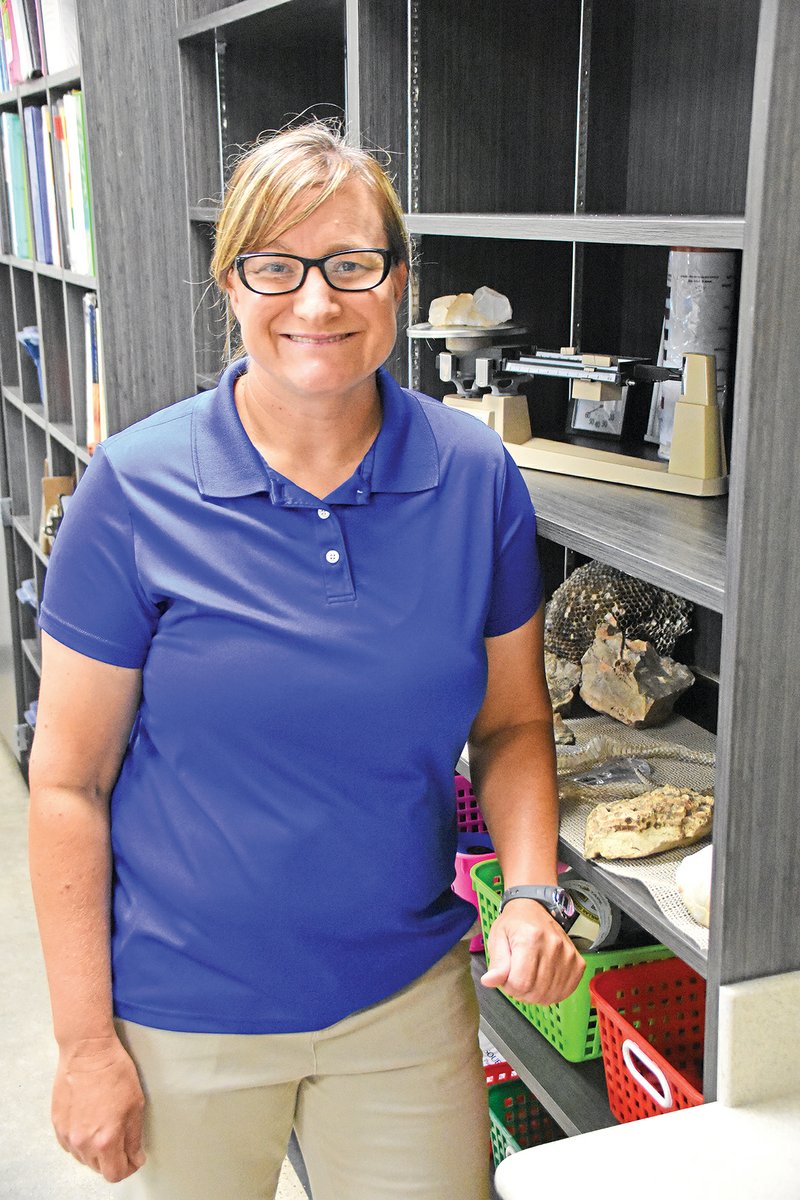 Cara Autrey, a 13-year-old from Sheridan, has cultivated a passion for photography and technology and an interest in cooking, thanks to her time in the local 4-H club.

Her mom, Angie Autrey, said neither of them would have known about 4-H if it had not been for Serena McGinley, a fifth-grade science teacher at Sheridan Intermediate School.

“Mrs. Serena goes above and beyond inside and outside the classroom,” Angie Autrey said. “Anytime she sees a project that Cara would be interested in, she lets me know about it, and we are both really appreciative.

“I really feel like she does that with all of her students. She really pays attention to what they are interested in, and she tries to promote and encourage them in those areas.”

“It is an honor,” McGinley said. “I feel like there are a lot of teachers — some fantastic teachers — to be recognized, and it is just an honor.

“It’s not like I don’t think I deserve it. I do my best to engage the kids and instill that love of science in them. I came here to meet that need and have fun and engage the kiddos.

“To be recognized for that is just an honor.”

McGinley is starting her fifth year at Sheridan after beginning her teaching career in 2005.

“My background is in agriculture, and science and agriculture go hand in hand,” she said. “We started a garden at the school in 2016, and I bring in a lot of different agriculture and try to incorporate that into my science class because agriculture is a science.”

She said some of the items grown in the garden include sweet potatoes and strawberries. McGinley said the class uses tables and charts to document the growth of the produce.

“The impact that it has on the students is just unreal,” she said. “They love going out there and having that hands-on process — it has just been profound.”

The SIS School Garden was first established in a partnership with the Grant County 4-H and the Master Gardeners. The garden earned state recognition in 2017 as Best Environmental School Garden and in 2018 as School Garden of the Year.

McGinley said some of her students have even started their own gardens at home.

“My daughter really enjoyed having her,” Autrey said of McGinley. “She has a good ability of being aware where students are and what their ability levels are and how to include them and encourage them.”

Autrey said her daughter is dyslexic but was able to excel in McGinley’s class and gained a lot of confidence in a couple of areas.

“She never treated my daughter in a way that made her feel singled out,” Autrey said. “She just expected her to do well. If [Cara] had any issues, McGinley was on top of it.

“She interacted in a way where she expected them all to do well because they are bright, intelligent, and that goes a long way, especially for young children.”

McGinley is originally from Wickes, Arkansas, which is south of Mena and north of De Queen. She said that’s where her whole family lives, and they are a family of educators.

She graduated from Wickes High School in 1998 and earned a bachelor’s degree from Southern Arkansas University in Magnolia in 2001. She received a master’s degree from the University of Arkansas at Fayetteville in 2003. Her first job was as a dairy herder for Louisiana State University.

“When I first got out of college, I began my career as a dairy herder,” she said. “Cows don’t talk back to you, but they sure don’t hug you, either.”

She decided to go the nontraditional route to get her education degree and earned it through a summer program.

“I loved working with kids, and I love agriculture so much, and because of my passion for agriculture, I decided, after being out of college, that I would go the nontraditional route for teaching,” McGinley said. “I went back and became a teacher because I wanted to spread the joy and love of agriculture to students.

“I wanted them to have someone who believed in them and wanted to make a difference in their lives.”

She said that after subbing in Fayetteville, she really missed having that interaction with students and missed getting to know them and “having that light come on in their eyes.”

“It was fun, and I loved it, and I truly missed that interaction and the joy you see with the change in their lives,” she said. “That’s why I decided to change careers.”

“Mrs. McGinley is, in my opinion, a truly gifted educator,” Knight wrote. “She quickly develops good rapport with her students, establishes solid routines, and employs consistent and fair practices in her classroom.

“Through her teaching, Mrs. McGinley creates a love for math and science in her classroom. She is a hands-on educator who actively gets kids involved. When entering her classroom, you may find bird eggs in incubators waiting to hatch, crystals forming in jars or different types of grass growing in bottles.

“She enhances their love of learning in practical ways while teaching science and social-studies standards.”

McGinley said she has a passion for fifth-graders and the lower middle-school age.

Jayme Kindy has worked with McGinley for the past three years and said she is hands-down one of the best teachers she knows.

“I don’t even know a word to describe her,” Kindy said. “She is phenomenal and always has the kids’ best interest at heart. She has a heart for the children she teaches.”

Kindy, who teaches literacy, said McGinley “puts her heart and soul into what she does, and every day is a new day for her.”

“She gives that opportunity to her children as well; she gives them grace every day,” Kindy said.

McGinley believes she was chosen as District Teacher of the Year because of the level of engagement she has with her students, “and all the different activities that I incorporate into my lessons,” she said. “I bring things to our campus that they might not otherwise be exposed to.

“I do that for my students because I want the same for my own kids. I just want our students to have every opportunity to learn and grow and excel — I want to give them that opportunity.”

McGinley is the sponsor for the technology club and the underwater robotics program, called SEAPerch. She said it is a really competitive program and “is really neat to see the students grow throughout the process.”

“Drones have recently become a big part of the agriculture industry,” she said. “Checking for insects and disease has played a pretty big part in hay and cattle.

“We are exposing the kids to that technology, so if they have a passion for agriculture, we can connect it to technology through drones or other activities. It has had a huge impact.”

“Serena McGinley is a teacher with drive, commitment and passion,” Knight said. “Her love for students shines daily. She creates a contagious energy that makes students love science.

“Sheridan Intermediate School is filled with highly passionate educators, but non any more so than Mrs. Serena McGinley.”