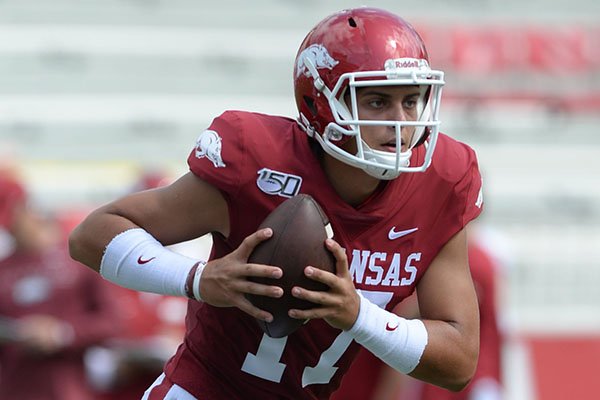 But if Saturday's annual Beanie Bowl mock game at Reynolds Razorback Stadium and recent history are indications, Arkansas might be going with the younger quarterback again.

Senior Ben Hicks, also a transfer, opened the mock game with the second unit on offense.

Last year, sophomore quarterback Cole Kelley got the starting nod in the season opener against Eastern Illinois after also running with the first unit in the Beanie Bowl. Kelley and junior Ty Storey alternated starts in the first four games before Storey won the top job for good.

There are still rumblings around the program that Hicks could wind up starting the season opener. Morris is expected to make an official announcement at his weekly news conference Monday, if not sooner.

With Colton Jackson, the projected starter at left tackle, not dressed out for Saturday's Beanie Bowl, the first-team offensive line had Myron Cunningham at left tackle, Austin Capps at left guard, Ty Clary at center, Ricky Stromberg at right guard and Dalton Wagner at right tackle.

Assuming Jackson, who has missed time with a foot injury, is able to start against Portland State, Cunningham figures to start at right guard. Capps returned to practice after missing time while recovering from a knee injury.

The first-team defensive line had four seniors with Dorian Gerald and Gabe Richardson at end, and McTelvin Agim and T.J. Smith at tackle.

The second-team defensive line had Jamario Bell and Mataio Soli at end, and Jonathan Marshall and Isaiah Nichols at tackle. Soli is a true freshman.

Receiver Trey Knox did not participate in the mock game, though he was on the sideline with other injured Razorbacks such as tackle Colton Jackson and receiver Jordan Jones, who was on crutches.

Knox, who has been held out of practices since Monday, is believed to be recovering from a bout of mononucleosis that was caught early, according to sources.

Additionally, offensive lineman Luke Jones was out with a compression sleeve on his left leg.

Offensive guard Austin Capps and receiver Koilan Jackson, who each had arthroscopic knee procedures done a couple of weeks ago, went through the mock game, with Capps starting at left guard and Jackson subbing in at wideout.

Among the more prominent names who ran with the scout unit on Saturday are tight end Hudson Henry, quarterback KJ Jefferson, running back T.J. Hammonds, receiver Shamar Nash, offensive lineman Chibueze Nwanna, and defensive linemen Nick Fulwider, David Porter and Taurean Carter. Hammonds is expected to start the season on suspension, and a source Saturday said he will sit the first four games.

With Deon Stewart out for the season with a knee injury, true freshman receiver Treylon Burks returned punts on Saturday. He fielded several punts cleanly, but he also fumbled one. Juniors De'Vion Warren and Chase Hayden were the top kickoff return men.

Sam Loy, a junior transfer from Colorado who punted two seasons at Vanderbilt, worked as the No. 1 punter with Reid Bauer working No. 2.

Kicker Connor Limpert drilled a 41-yard field goal during the Beanie Bowl, but he missed a 50-yard try on the final snap of the day.

Arkansas Coach Chad Morris said there would be a staged fight Saturday to reinforce the reality that players who mix it up are ejected.

The two players selected for the mock fight were center Ty Clary and defensive tackle Nick Fulwider, who got animated playing their roles. Clary was jumping up and leveling fake overhand blows, while Fulwider was giving body shots and even brought a fake raised knee into the theatrics.

An exchange between a scout-team member and offensive tackle Dalton Wagner late in the mock game showed that the ribbing never ends between teammates.

The unidentified scout-team member on the sideline yelled out to the 6-9, 308-pound Wagner, "Get in the weight room, Wagner!"

Instead of shouting a lengthy response, Wagner just said, "Scoreboard" and pointed to the big video board that had a 23-8 score in favor of the Red starting unit.

"It's something we spend a lot of time on," Morris said. "We start out with our defensive staff the very first day, and we'll video it in front of our team."

Morris said defensive coordinator John Chavis and defensive staff members show and tell how to avoid improper techniques that could lead to targeting calls or injuries.

"This is in front of quarterbacks, O-linemen, kickers, everybody at some point who might have to make a tackle," Morris said. "The importance of keeping your head up.

"Obviously when we tackle in practice, it's always something we bring attention to in the team meetings. The guys that lower their head or hit with the crown of their helmet, we address that immediately in a team meeting by showing video.

"And we'll also show guys that do it the right way and commend those guys for doing it the right way. So that is an everyday part of our team meetings and talking about guys taking care of their teammates and the proper way to tackle and leveraging the ball and keeping your head up."

Offensive coordinator Joe Craddock said he is confident with how the quarterback play will evolve this season, with graduate transfers Ben Hicks and Nick Starkel involved in a position battle with freshmen John Stephen Jones and KJ Jefferson.

"I feel confident, and here's why," Craddock said. "Obviously, Ben's been in the system for several years. Nick has come in and learned it very quickly. I've been very impressed with how intelligent he is and how quickly he's picked up our offense.

"I'm just really challenging Nick, and all those guys really, just to get the finer details of the offense down, the small stuff. You may be out there with a guy like A'Montae Spivey at running back, and you might have to tell him what to do. So I'm challenging those guys to just know every detail of our offense and try to help them when they're out there.

"John Stephen, again, he's done some really good things. He's really put some pressure on us to really give him a shot. I'm really proud of my room. I'm a lot more confident, obviously. John Stephen Year 2 in the offense, Nick coming in and being smart and learning it quickly, and Ben obviously being in it for so long."