Community colleges' grads sought by UA; scholarship to assist in some transfers 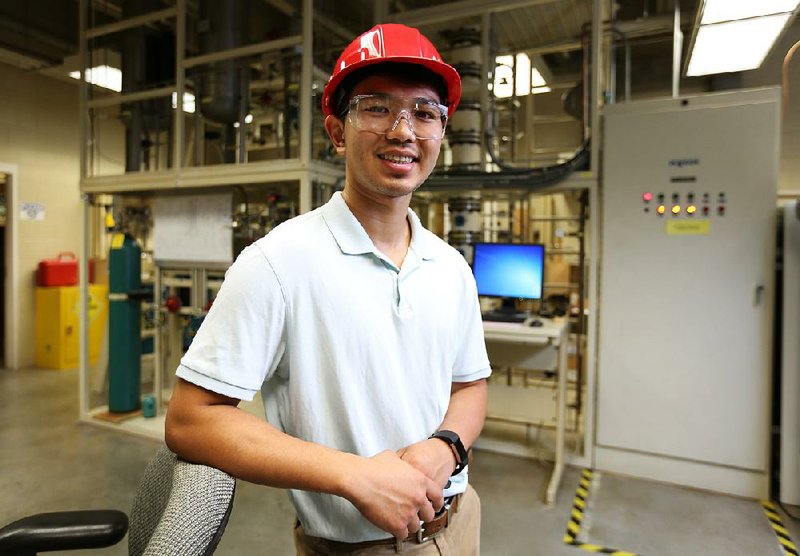 FAYETTEVILLE -- Community college transfers to the University of Arkansas, Fayetteville mostly have arrived from the state's largest two-year school, located about 25 miles away in Bentonville.

Out of 687 Arkansas community college transfers in the 2018-19 academic year, about 73% arrived from Northwest Arkansas Community College, according to preliminary numbers provided by UA.

Yet the state has 22 community colleges that enrolled 36,556 undergraduates in fall 2017, as is listed in the most recent comprehensive report from the Arkansas Division of Higher Education.

UA now has taken a step toward establishing a transfer pipeline of sorts, offering major scholarship help to graduates of the seven community colleges within the University of Arkansas System -- none within 130 miles of Fayetteville.

The Arkansas Transfer Achievement Scholarship, announced in May, erases the steep tuition increase that typically goes with transitioning from a two-year college to a four-year university. Students receiving the scholarship can continue their studies in Fayetteville while paying the same tuition rate as at the two-year schools.

The award, which generally requires a 2.0 grade-point average, will result in roughly a 70% tuition discount for some. UA's in-state tuition rate is $252.28 per semester hour, compared with, for example, the $74 in-district rate at Cossatot Community College of the University of Arkansas.

National research shows community college students tend to be older and also come from more diverse racial and ethnic backgrounds, meaning that the new scholarship program ultimately could boost diversity at UA, where about three out of every four undergraduates are white.

For community college students, data show that many wish to obtain four-year degrees but struggle to do so, said Janet Marling, executive director of the National Institute for the Study of Transfer Students. The institute is based at the University of North Georgia.

Students may be "place-bound," having chosen a school based on proximity to their homes, Marling said.

"Sometimes it's financial. Many times it's geographic because they need to be near their families," Marling said.

Loc Huynh, 22, is a graduate of the University of Arkansas-Pulaski Technical College in North Little Rock. In August of last year, he began studying chemical engineering in Fayetteville.

Huynh arrived in the U.S. at age 18 from Vietnam, where he had studied English.

"It's always been in my mind that I want to have a higher education, so it was my goal to finish college here," said Huynh.

Picking up on the American accent was a challenge, however, Huynh said. He spent a year working as a cook at a Sonic Drive-In before starting college, improving his English while also learning that "working full time and not with a degree is really difficult," he said.

At Pulaski Tech, he excelled academically and in 2017 received the college's Academic All-Star scholarship award, though he described his achievement more modestly.

"I would say [I'm] a hard-working student," Huynh said.

He completed his associate degree in two years and arrived in Fayetteville with help from scholarships and also from his brother, Tai, a graduate student at UA and a reliable roommate, as the two brothers share a home.

Figures show Huynh was among 35 students who transferred to UA from Pulaski Tech in the 2018-19 academic year, according to preliminary data provided by UA. The North Little Rock community college is the state's second-largest, with 5,629 undergraduate students in fall 2017, according to the Arkansas Division of Higher Education.

Huynh said that as far as making their way to Northwest Arkansas, "not a whole lot of people want to go to U of A-Fayetteville," explaining that the combination of having to leave their "comfort zone" to move some 200 miles away while struggling to pay for tuition may seem "not very achievable."

She cited a 2016 study by Columbia University researchers that involved more than 700,000 degree-seeking students starting at community colleges. Out of that group, 14% ended up earning a degree from a four-year university within six years of starting school.

"Perhaps that was not a realistic goal for some of those folks. Life happened, and it just wasn't a good time for them. But for many of them, we believe the transfer process and transferring in general is just entirely too complex," Marling said.

The study also examined state-by-state outcomes for students transferring from a community college to a four-year university. Arkansas ranked in the bottom 10 among 43 states with data available when it comes to community college transfer students earning bachelor's degrees.

Federal data show that at Pulaski Tech, for example, black students earned 383, or 43%, of the 893 associate degrees awarded in 2016-17. At UA, black students earned 184, or 4%, of the 4,475 bachelor's degrees awarded by the university in the same year, according to the National Center for Education Statistics. Figures from the center for more recent academic years were not available.

Brea Metcalf, 27, is a graduate of Pulaski Tech, having earned an associate degree in May.

Told by the Arkansas Democrat-Gazette about the new UA scholarship, Metcalf said that "I'm very much interested in reaching out and calling the University of Arkansas and finding more information about it," adding that she wished there had been more outreach to students about the award.

Metcalf, who is black, said she attended high school in Forrest City, which has a majority black population. After earning her diploma, she chose to attend the University of Central Arkansas in Conway, about 115 miles from her hometown. She left to work full time, she said, but re-enrolled this summer as she pursues an economics degree.

UA, in Northwest Arkansas, is almost 300 miles from Forrest City. Metcalf said a sibling attended school there but that "I always felt like, initially, that I didn't fit the caliber, or that it was above what I could afford."

The new scholarship could be something of a first step toward increasing diversity at UA, Metcalf said.

"I think that's a start. What they're doing now is a start," Metcalf said.

Marling said the UA effort is "extremely well-intentioned," though she said that, for the effort to work as intended, academic programs must agree to accept and apply the two-year college credits toward degree requirements.

UA Chancellor Joe Steinmetz said the university is "really committed to the [UA System] transfer program for the long term."

But "this isn't free for us," Steinmetz said, adding that it's unknown exactly what the costs will add up to for the campus.

"We're using the [University of Arkansas] System schools right now as a pilot because we don't really know -- and really can't predict -- the number of students that might take advantage of this," Steinmetz said. Fall classes at UA begin today.

The university's total student population, including graduate students, last fall was 27,778. Steinmetz has said the limit for UA, based on existing campus resources, is about 30,000 students.

"I want to see how many students are taking advantage of this throughout the [UA] System schools to see how we push toward that number, and then assess whether we can do it more broadly for other community colleges," Steinmetz said.

Randy Esters, president of North Arkansas College, said in an email that the school recently signed a transfer agreement with UA's business college to help students with a "direct pathway" to Fayetteville.

As far as the new Arkansas Transfer Achievement Scholarship, "I'm hopeful that UA-Fayetteville will extend the scholarship to colleges that have articulation agreements with them in the near future," Esters said.

Lisa Anderson, Northwest Arkansas Community College's executive director of planning effectiveness and public relations, said in an email that the college's president, Evelyn Jorgenson, has remarked about the school having "a great working relationship with the University of Arkansas."

"She and Chancellor Steinmetz work extremely well together, and though we do not have a similar program at this time, we are always pursuing great opportunities for our students," Anderson said.

In January, the two schools announced a program allowing qualifying students on their way to associate degrees to enroll in one course per semester at UA. The program aims to admit 50 to 100 students per academic year.

For graduates of UA System community colleges to qualify for the Arkansas Transfer Achievement Scholarship, they must have earned an associate degree in December 2018 or later and also live in the state.

"I think it's really unique. I know of no other programs like this," said Steinmetz, who announced the new scholarship while delivering the May commencement address at UA-Rich Mountain in Mena, about 130 miles from Fayetteville.

"I just hope it has the effect we're looking for, and that is to get more students with four-year degrees in the state of Arkansas," Steinmetz said.