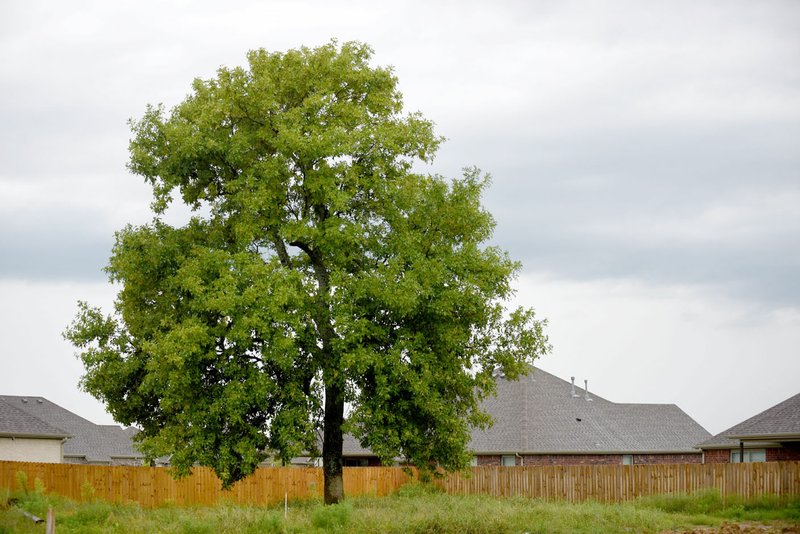 NWA Democrat-Gazette/DAVID GOTTSCHALK A tree on Divide Drive is visible Thursday, August 22, 2019, surrounded by orange fencing in a new subdivision in Fayetteville. The city's urban foresters have begun using the National Agriculture Imagery Program to get a more accurate assessment of the urban tree canopy, and have implemented a variety of measures to preserve and mitigate the urban tree canopy.

FAYETTEVILLE -- This city in the wooded Ozark Mountain prizes its trees.

The shade helps keep temperatures down in the summer, reducing air-conditioning costs, and trees break the wind blowing during cold months. That makes walking more comfortable and just makes for a more livable environment.

What: Two free trees available per resident. Proof of residency is required.

But Northwest Arkansas is growing rapidly, and preserving the trees while accommodating economic development makes for a fine line.

Urban foresters say Fayetteville is losing tree canopy every year, but they aren't sure how much, and the city needs to know how big the problem is before it can fix it.

Tree canopy refers to the area that tree branches and leaves cover when viewed from above.

The city's goal is to have 40% tree canopy, but as old trees are cut down to make way for development and new trees are planted in their place, the canopy shrinks.

Trees planted this year will take a decade to grow large enough to cover the same area, foresters say.

From 2016-18, in gauging a development project's effect on the tree canopy, city foresters reviewed documents before work started on the project.

But they came to realize that a project can look sorted out on paper, but develop differently from what was planned.

This year, they started using grading permits -- which allow developers to break ground on a project -- to get a more accurate picture of the project's effect on the tree canopy, said John Scott, one of the city's two urban foresters.

Last year, city foresters learned that they could get tree canopy information from the National Agriculture Imagery Program, which surveys the city in odd-numbered years. Using satellite imagery, the foresters can get an accurate picture of the canopy, Scott said.

Getting several years of information from that national program will help the city fine-tune its approach to tree preservation and mitigation, Scott said.

"With this information, we can figure out exactly how many trees we need to plant to reach our goal," he said. "From there, we can set long-term goals."

The city adopted its tree ordinance in 1993. It sets standards for developers to follow when building new projects.

Each zoning designation has a percentage of tree canopy that developers must maintain.

Foresters review final construction plans before the projects break ground, then after construction starts, the foresters' involvement becomes complaint-driven. They can issue a stop-work order on any project found violating the tree preservation requirements.

Issuing stop-work orders has proved effective, said Melissa Evans, the city's other urban forester. "That usually gets their attention pretty quick, because they're under tight deadlines, and time is money," she said. "But, unfortunately, that's about all we can do."

The math doesn't always work out, said Garner Stoll, the city's development services director. If the highest preservation goal is 30%, and a developer decides to maximize the tree removal, then a property is guaranteed to lose 70% of its tree canopy, he said.

"If preservation is our only strategy, we have a losing strategy."

That's why planting new trees, where there were none, is so important to reach the 40% goal, Stoll said.

City planners are discussing changes to the city code to bolster canopy coverage, but there's a balance to strike, Stoll said. Raising the tree preservation requirements, for instance, could cause buildings to be oddly located on a property. Planners try to encourage sound urban strategy, with a building's orientation to sidewalks, streets and other buildings conducive to walkability and transit, he said.

Preserving every tree could spread development throughout the city, contributing to urban sprawl, Stoll said.

"It takes the whole village to meet our planning goals," he said. "We can plant trees, we can require the developers to plant trees ... but it takes all the property owners to reach our canopy goals."

Old, large trees especially should be protected, former Mayor Dan Coody said. Coody has a large pecan tree behind his property that he said he became concerned about when construction on a restaurant going in on the other side of his fence dug a hole exposing some of the tree's roots. Coody raised his concern with the urban foresters, who issued a stop-work order and instructed the contractors on how to rectify the situation.

It's one thing to talk about being a city that recognizes the importance of trees, but another thing to put good policy into practice, Coody said.

New road projects sometimes don't have adequate street trees included in their plans, he said. Inappropriate types of trees get planted, such as elm trees under power lines or crabapples where there's not adequate room for the trees to spread, he said. Trees sometimes get trimmed by tractor-trailer rigs hitting them instead of with proper maintenance, he said.

Making the city code more specific, adding staff members to enforce the tree ordinance and adding protections for larger, older trees would show that the city is serious about preserving and increasing the tree canopy, Coody said.

"We're kind of like, 'Well, isn't it too bad that we've got to lose this canopy, but gee, growth is important,'" Coody said. "To me, the aesthetic and the environmental qualities that trees give should be just as important as the rest of our infrastructure."

Having a 40% urban tree canopy goal is a good standard, said Krista Quinn, urban forestry program coordinator with the Forestry Division of the Arkansas Department of Agriculture. The state has a 58% canopy. Little Rock had a 48% canopy in 2013, per the division's assessment then.

Few cities closely monitor their tree canopy or have rules to maintain it, she said.

In Northwest Arkansas, Springdale does not have a tree ordinance. Bentonville has an ordinance that protects trees only in the rights of way. The city's tree canopy was put at 25% after a 2013 assessment. Its goal is 35%.

Rogers requires that replacement trees be planted if a certain number of trees are removed, said city spokesman Ben Cline. There's a 1-to-5 ratio for development, he said. Developers also can get credits for preserving existing trees.

Development and tree preservation don't have to be exclusive ideas, Dockery said. Tree canopy is a shared resource, he said.

"We don't want to prevent people from making money or building the things they want to build on their property," Dockery said. "We just want to make sure we're thinking of the future and thinking of not only ourselves, but our neighbors."