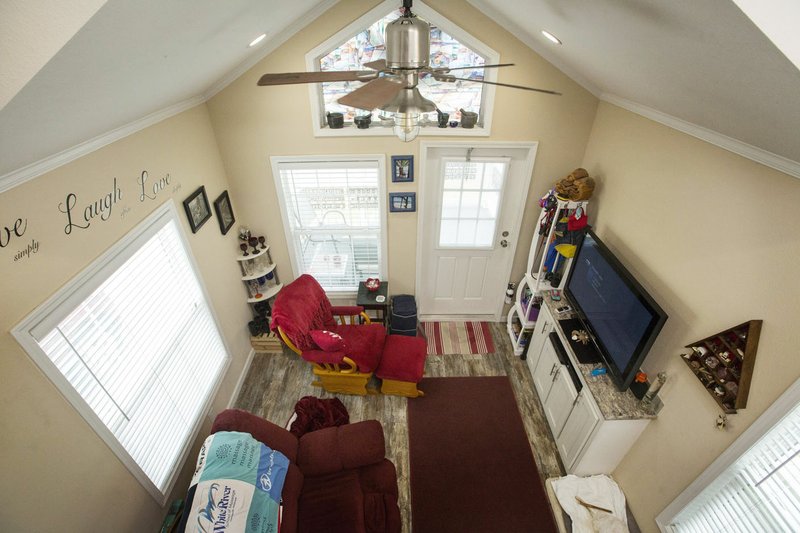 NWA Democrat-Gazette/BEN GOFF @NWABENGOFF A vaulted ceiling and large windows in the living room of LJ Martin's tiny home Thursday, Aug. 22, 2019, in the Eagle Homes on Olive neighborhood in Rogers.

ROGERS -- The advent of tiny homes is proving a bit of a challenge for the city, as it seeks to update its zoning and ordinances.

The city prohibits rezoning land for mobile homes, and the tiny homes fall under its definition of "mobile homes" because they are manufactured and then moved onto land instead of built from the ground up.

A carbon footprint is the amount of greenhouse gases and specifically carbon dioxide emitted by something, such as a person’s activities or a product’s manufacture and transport, during a given time period.

"This is not your mom's mobile home park," John McCurdy, community development director, said at a city Planning Commission meeting in July.

"This is a new type of structure that's a manufactured home. It's got a pitched roof. It's got residential siding on it, and we should consider whether our prohibition against mobile homes is valid in today's market."

Betty Kelso, 78, asked for white cabinets and lots of windows when her home was manufactured. She lives in a 399-square-foot "tiny home," and she has more than 20 neighbors who do the same.

The city is writing rules to allow more tiny homes in Rogers.

Kelso's neighborhood near downtown was built in 2016 on land zoned for mobile homes. Developers David and Chris Gallo recently tried to do a similar project with 39 homes on about 4 acres about 2 miles west of the existing homes.

They found that zoning regulations don't allow the homes there.

David Gallo said it's expensive to move a tiny home once it's placed.

The city's planning staff presented a "cluster housing" proposal to a Planning Commission committee last week that would allow tiny homes and cottage court housing in some residential areas.

Cottage court and cluster housing is grouping three or more detached units on one lot that are typically closer together than usual with the intent of retaining an open space area, according to the proposal. Houses usually share a yard or common outdoor space in cottage court style housing, McCurdy said.

"This is really in response to the recent conversations we've been having about how to address tiny homes and where they should exist in our code as a permitted housing type," said Ethan Hunter, city planner.

The code would require that a manufactured home have a porch or awning; have a pitched roof and roofing material of a type customarily used on site-constructed houses; have any wheels, axles and hitch mechanisms removed; be placed on a concrete slab or brick skirting; and be compatible and similar in appearance to surrounding site-constructed buildings.

The existing tiny home park is for people 55 and older. A second park that the Gallos hope to develop would allow all ages, David Gallo said.

"I think we'd be absolutely shocked at how many young people would want one of these and at how many people want a crash pad," he said, adding that some people would rather spend most of their time outside their homes than inside.

The intention is to offer affordable, quality homes to people who do not want or need a lot of space, he said.

Tiny homes have also been used as transitional housing for homeless people in some communities across the United States.

"To live tiny is to live a minimalist lifestyle," she said.

To live small is also to live creatively.

The stairway up to a loft in Martin's home doubles as a bookshelf with books stacked on opposite sides of the steps. Martin's home has two futons for guests in the loft that overlooks the living room.

Kelso said she sold her dresser. Her bed is built on top of six drawers. She stores sweaters in decorative hat boxes above her closet. She opted for an open floor plan instead of a loft.

Martin wanted a full kitchen because she likes to cook and mix spices. Her house, as many of the tiny homes do, has a full-size refrigerator, microwave, stove and oven.

Martin said she learned to let go of things she didn't need.

There are no tiny home developments in Fayetteville, but they are allowed, said Garner Stoll, development services director for the city. Homes must have at least 120 square feet and cannot be on wheels. They also must meet certain design standards, such as pitched roofs, he said.

Ellen Norvell, city engineer for Bentonville, said the issue has not come up in her city.

Bentonville allows land to be rezoned for mobile homes, and manufactured or tiny homes would likely fall into that category, she said.

Tiny homes are popular among people who want to own homes, but do not want to pay a high price or be responsible for a lot of maintenance, said Mervin Jebaraj, director of the Center for Business and Economic Research at the University of Arkansas, Fayetteville.

"When you think about the people moving into this region, they tend to be younger people who may be interested in home ownership," he said of Northwest Arkansas.

He added that, although tiny homes are cheaper overall than traditional homes, they tend to be more expensive per square foot.

Average residential home prices in June were about $262,000 in Benton County and $250,000 in Washington County, according to the Northwest Arkansas Board of Realtors.

"The underlying issue is Northwest Arkansas is running out of lots where you can build homes," Jebaraj said.