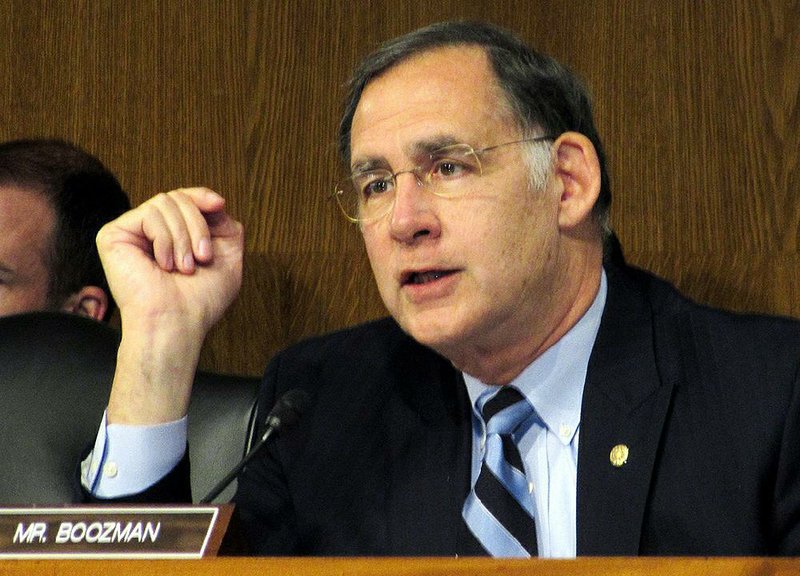 SPRINGDALE -- U.S. Sen. John Boozman, R-Ark., toured a farm operation Monday that is largely immune to the weather, to pests and to trade wars.

Boozman, the son of a veteran, is a member of both the Senate Veterans' Affairs Committee and the Agriculture, Nutrition and Forestry Committee.

The Vet Veggies farm was the first stop on a tour of businesses Boozman said could provide opportunities for veterans.

Jerry Martin, founder of Vet Veggies and host for the tour, said a veteran or someone else could start a similar one with an initial investment as low as $350,000. Martin is a local businessman and veteran of the Vietnam War.

Although Vet Veggies is profitable, its real purpose is to refine techniques of hydroponic farming, he said. The idea is to come up with a business model that can spread nationwide.

"Veterans like to work outside and be their own boss," he told Boozman. "Also, to run this kind of business, you have to be involved with your community, with other people."

That would help returning veterans re-enter civilian life more successfully than many other options, Martin said.

"We're profitable now, but we could be a lot more profitable with more investment or a government grant or low-interest loan," he said. This capital would allow the business to improve the farming techniques quicker, he said.

A traditional farm requires hundreds of acres along with tractors and other farm equipment, Martin told the senator. Hydroponic farming by Vet Veggies' method can start with equipment in one 40-foot long conventional storage unit and as little as 1 acre of land. The units take up little space and can be stacked, he said.

No business enterprise is risk free, but hydroponic farming -- growing plants without soil by feeding them the needed nutrients mixed in with water -- has far fewer risks and variables, according to Martin.

Boozman noted during the tour 2018 and now 2019 have been bad years for the state's traditional farms. Rain in autumn last year ruined crops at harvest time statewide, he said.

"The weather's been absolutely terrible," he said.

As for the trade war underway in China, including tariffs, Boozman said there is no easy way out. The federal government has paid billions to farmers this year to offset lost trade opportunities for farmers.

"The Chinese government lies, cheats, steals and manipulates," he said. "This situation started years ago and won't end easily, but it is happening at a bad time for the farm sector. We should be supportive of our farmers as a country."