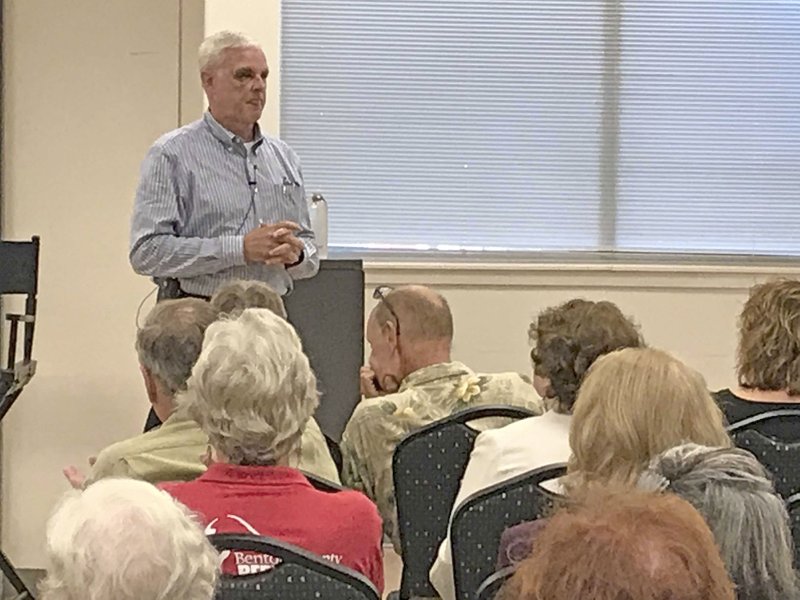 ROGERS -- Third District Rep. Steve Womack of Rogers faced criticisms of his record on immigration, his support for the president despite offensive remarks, gun laws and other issues but gave no ground in a town hall meeting Wednesday evening.

A near-capacity crowd filled the 150-seat room in the Rogers Adult Wellness Center, which was built while Womack was Rogers mayor. This time, the usually friendly venue for Womack also included constituents who wanted more humane immigration enforcement and more far-reaching measures to curb gun violence, among other issues. The forum began at 5:30 p.m. and lasted until 7 p.m.

"I believe in a sovereign border and in border security," Womack said. He lamented partisan gridlock on immigration reform killed a $25 billion increase for border security and facilities for immigrants, a bill he voted for while the GOP's most conservative members in the House didn't.

Womack's wish for more bipartisanship in Washington is no help to children separated from their parents at the border, several audience members said, including Gladys Tiffany of Fayetteville.

Womack anticipated criticism. Walking into the meeting with a black eye covering much of the right side of his face from recent, but successful, eye surgery, he quipped at the beginning of the meeting that his goal was to get through the evening without his left eye looking like his right.

Pressed on the issue of legislating more background checks and other restrictions on access to guns, Womack said: "If you start chipping away at the Bill of Rights, where is it going to stop?" He referred to the U.S. Constitution's Second Amendment, which guarantees the right to bear arms.

On President Donald Trump, Kirk Linam of Fort Smith reminded Womack the congressman objected to the president's July 14 tweet telling four members of Congress to "go back where they came from," despite three being born in the United States and the fourth immigrating legally with her family when she was 10 years old. Yet Congress took no vote censuring the president. Womack replied Congress also takes no vote when colleagues who are Democrats say things that he considers offensive.

Womack called special counsel Robert Mueller's investigation of the president's campaign as part of the investigation into Russian interference in the 2016 election "a sham" at one point. At least 20 members of the audience left after that.

Womack responded to one speaker who voiced environmental concerns by saying, "Here's the problem with folks like you" before saying she wanted to destroy the fossil fuel industry. The woman who voiced those concerns declined to give her name. Another frustrated town hall participant, Valerie Wilcoxson of Rogers, told the congressman as she walked out he should listen and respond to what people say, not reply with what he says they think. Meanwhile, Womack's supporters in the crowd were quiet by comparison and greeted remarks of Womack's with applause.

Womack represents one of the safest Republican seats in the country. No Democrat has held the seat since 1964. When the GOP lost 40 seats in the House in the last election, Womack won his re-election bid with almost 65% of the vote. So far, he faces a challenge from Celeste Williams of Bella Vista, a Democrat. No Republican rival has yet announced.

After the meeting, Lesa Rissler of Siloam Springs said she supports Womack and respects his willingness to face critics. "He has a tough job," she said. "I admire him." Rissler is a member of the Siloam Springs Board of Directors.