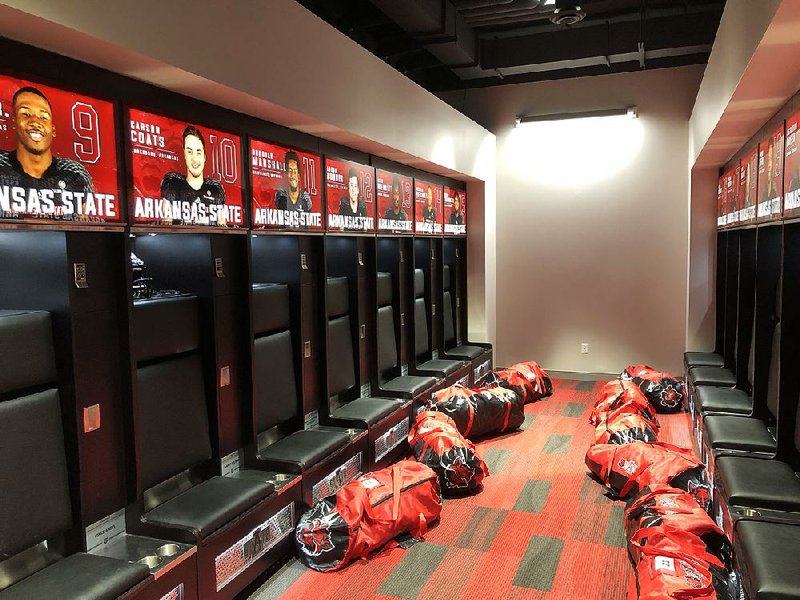 A new locker room for Arkansas State’s players is part of ASU’s new Centennial Bank Athletics Operations Center, a 66,500-square-foot building that is part of a $29 million renovation of the north end zone at Centennial Bank Stadium. ASU players saw the inside of the facility for the first time Sunday.

Behind the south end zone stands the program's now-former operations facility, which opened in 2002. By today's standards in college football, it's old and outdated. Some of the meeting rooms inside it still bear "ASU Indians" on the wall. ASU switched its mascot to the Red Wolves 11 years ago.

But on the opposite side of Centennial Bank Stadium, behind the north end zone and adjacent to the team's indoor practice field, sits a new facility -- the Centennial Bank Athletics Operations Center, a beacon of what ASU's football program has grown into and what it's still trying to achieve. The new facility was part of the $29 million renovation of the north end zone, which also added more premium seating, club areas and those two signature waterfalls in the corners.

ASU players went into a frenzy Sunday evening when they got to see the inside of the new two-story, 66,500-square-foot building for the first time. Videos and photos quickly leaked on Twitter.

Make no mistake -- everything about ASU's new football complex is elite, from the locker and weight rooms to the art on the walls.

Inside the new building, the Red Wolves have been fitted with a massive team auditorium, which features 201 movie-theater style seats and a giant video screen. Take a step out into the hallway and you'll see a snazzy new players' lounge fit with fresh wall art, TVs, couches, pool and pingpong tables and a kitchen area.

In the same hallway, there's a huge shrine on the wall for all of the Red Wolves who've made it to the NFL and their respective teams. Fourteen names, including former linebacker Bill Bergey, are listed under the Philadelphia Eagles' logo. Another 11 are listed with the Miami Dolphins.

Elsewhere on the top floor are countless offices for coaches, fitted with big-screen TVs and a view of Allison Field, as well as various meeting rooms and one particular room for some shut-eye. That room has two high-tech, reclining massage chairs, more sophisticated than ones found inside the local mall.

"I love it," Bayless said. "[I've] graduated already, so I got a lot of time on my hands just to come up here and prepare my body for the first game, and I sit in the massage chairs all day."

A trip downstairs, though, is where the Red Wolves' new facility really shows off why it's one of the best in the nation, starting with the locker room, which is the crown jewel of the building.

College football locker rooms are hardly just locker rooms in today's climate -- they're personalized and outfitted with plenty of technology.

Each locker has been re-engineered with vents and charger ports and comes with an illuminated display above it of the player's picture, name, hometown and jersey number. Each of the 120 lockers cost $5,000 and was sponsored through donations. ASU Athletic Director Terry Mohajir said 90 percent of the lockers were even sponsored by former ASU football players, and each locker bears the names of those who chipped in.

"They wanted to pay it forward," said Mohajir, a former ASU football player himself, "and they believed they should help, especially since they were the people that benefited the most from their athletic scholarship and experience."

Giant TV screens are everywhere, and a massive Red Wolves logo looks down from the ceiling in the middle of the room. There's also a barber shop inside just around the corner.

Downstairs, there's also a new training and rehabilitation area with therapy pools, as well as a 10,000-square-foot weight room across from it, which even has a partial view of the field as it sits just inside the north tunnel of the stadium.

"You got more space to do what you want to do," Bayless said. "Everything is just beautiful. You got to appreciate Terry Mohajir, [Chancellor] Kelly Damphousse, and we appreciate everybody for contributing to what they were doing to get us in this facility."

The entire facility had been years in the making, and it had first been proposed even before Mohajir became the athletic director in September 2012.

Since Mohajir took the job, the Red Wolves' football program has experienced a significant makeover.

An indoor practice facility was built, a new LED video board was installed in the south end zone, the Johnny Allison Tower and loge boxes were constructed on the west side of the stadium, a new turf field was installed and the entire north end zone has been revamped and expanded with premium seating, waterfalls and, now, a fully operational football complex that rivals many of the nation's top programs.

"I know it's one of the best facilities in the country, but that wasn't the purpose of it," Mohajir said. "I truly believe that if you're trying to advocate and provide the best services possible for your students, that happen to be athletes, then you're gonna come up with something really special, and that's what we did."