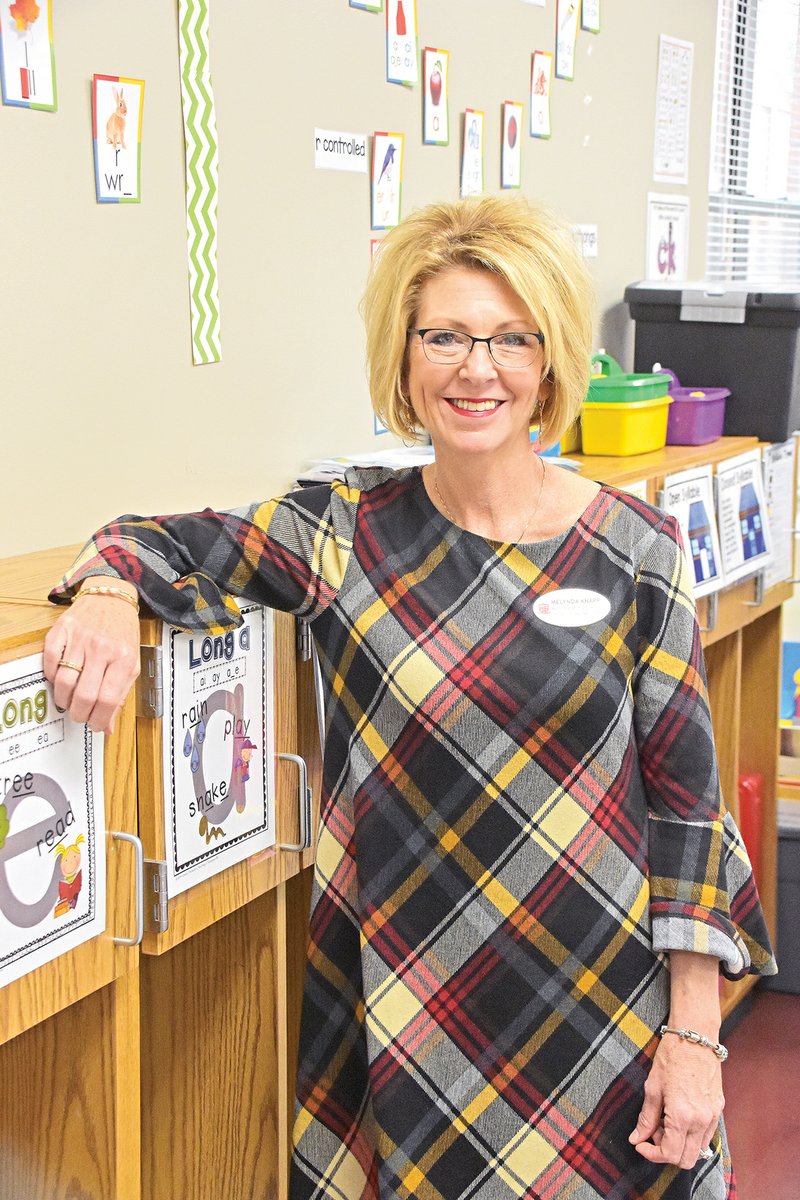 Melynda Knapp stands in a classroom at Morrilton Primary School, where she is an instructional facilitator. Knapp was chosen in November by the Morrilton Area Chamber of Commerce as Educator of the Year. She is in her 35th year of teaching, including 27 in the South Conway County School District.

When Melynda Knapp of Morrilton started teaching 35 years ago, she said her favorite part was seeing “the light” in children’s eyes when they’re learning.

Now, it’s the excitement she sees in teachers’ eyes that motivates her, too.

Knapp was chosen Nov. 4 as Educator of the Year by the Morrilton Area Chamber of Commerce at its 92nd annual awards ceremony at Sacred Heart School.

“I am not a look-at-me kind of person at all,” she said. “I am very honored and humbled to be nominated and then to be chosen. I feel that my hard work was appreciated. I feel like I’ve worked very hard, and I want to honor God with everything I do.”

Knapp, a longtime first-grade teacher, is the instructional facilitator for Morrilton Primary School, which is kindergarten and first grade.

“My job is to coach teachers, basically, and to help improve instruction. I do work with some kids, but I mainly work with teachers,” she said.

Knapp said she asks teachers, “What do you need from me?”

“I may model lessons,” she said. “I may go in [their classrooms] and watch them and give them suggestions. I gather materials if they need it. I watch their intervention to make sure they’re giving the right intervention,” she said.

Knapp addresses math and literacy, but her focus is on the latter.

“Literacy’s my thing,” she said.

Knapp was born in Arizona, but she’s lived in Morrilton most of her life, she said. Her family, which included her three sisters, moved to Morrilton when the paper mill opened in the 1960s, when she was 4 years old.

“My dad and his father were water-well drillers out west in New Mexico and Arizona. [My dad] came and opened the paper mill. My grandfather was also a layman Baptist preacher,” she said.

Knapp went to the University of Central Arkansas in Conway, and she said she never doubted that she wanted to be a teacher. She earned an undergraduate degree in elementary and special education and a master’s degree in special education.

She started her career teaching special-education classes in Perryville, a self-contained class for all ages. She also taught first and fifth grades in Perryville.

“At that time, I wanted to help special-needs kids, but after I taught first grade, I loved the pace of first grade and the fact that I could teach them to read, and they retained it,” she said.

Knapp has taught at Morrilton Primary School for 27 years. Although she has taught first grade for most of her tenure, she also taught special-education classes for fifth and sixth grades and junior high students in the South Conway County School District.

She was an interventionist for one year, and this is her third year as a facilitator. Knapp is a nationally board certified teacher, recently recertified, and was also the 2004 South Conway County School District Teacher of the Year.

“She was just a natural fit for that position,” Wilson said. “She came out of the classroom, and she is working with teachers and with me and with students, so she’s really at all levels of educating here.”

Knapp is in charge of standardized testing (for K-1) , so she knows which students are struggling and in what areas. Then she coordinates with the interventionists to target those students’ needs.

“It’s teachers working collaboratively to break down standards into learning targets so we can make sure the kid has learned the whole standard, and we intervene in real time so kids don’t slip through the cracks,” she said.

Wilson said Knapp is involved with parents during the summer. The district received a Giving Tree grant two years ago, and Knapp organizes a four-session Reading Roundup in the summer.

“Every child in pre-K and up got a book and was invited to the summer program,” Knapp said. “We came and gave tips to parents on how to help their children read, and every child got to pick three books and hear a story time.”

The program had leftover books, so Knapp said she is going to community tutoring programs and talking to parents and giving them free books for their kids.

Knapp also went to Menifee to the district’s outreach program and met with those parents to share with them the science of reading and to give children books.

She plans to do the same thing at a Parent-Teacher Club meeting Dec. 10 at the primary school.

“I’ll talk to the parents about how to read to their kids, the science of reading, and the kids who come will get free books,” she said.

Knapp said part of the problem with struggles in reading is a change in society and increased use of technology.

“Kids aren’t getting the same at home as they used to,” she said. “Children don’t get as much lap time, when parents used to sit and talk to their kids. Phonemic awareness is what they come to us lowest in. We’re having to fix holes in their language development.

“My kids watched TV, too. We made reading time. I wasn’t so into my phone; I was an attentive parent. I talked to my children. When we’d go to the grocery store, I said, ‘Go get me the green beans. How much do you think they cost?’ I didn’t hand them a phone and walk off. They’re just not being spoken to.”

Knapp said she is doing research on the effect of tablets and cellphones on children and how their usage affects children’s reading and vocabulary skills.

Wilson agreed with Knapp’s assessment and said she had been reading research on how technology is “rewiring our brains” and affecting students’ attention spans.

Knapp has suggestions for parents to improve their children’s vocabulary and reading skills.

“They need to struggle a little bit with a word, not be told what a word is. And parents need to read with them, give them 15 minutes a day — I don’t care if it’s them reading to parents, or letting the kids read — 15 minutes, an uninterrupted time to snuggle and read.”

Knapp said she doesn’t want to lay all the blame on parents.

“The flip side of that, too, … our brains are wired to speak, not wired to read. We have to be instructed to read. We are learning through the science of reading the most efficient, best way to do it. We’re doing the hard work of teaching kids how words work, and the rules and how that can go between reading and writing and putting that all together.

“My goal is to make kids truly aware of how important reading is and how important it is to actually read, hold and feel a book rather than an iPad. I want kids to fall in love with reading and continue.”

And she does that by collaborating with the teachers who are on the front lines.

“Now, it’s gone [from seeing children get excited] to the excitement of, ‘Oh, my gosh, this kid grew this much on such and such assessment.’ Now teachers come to me, and they’re excited about their kids learning.”

And Knapp said that’s what makes her hard work worth it.