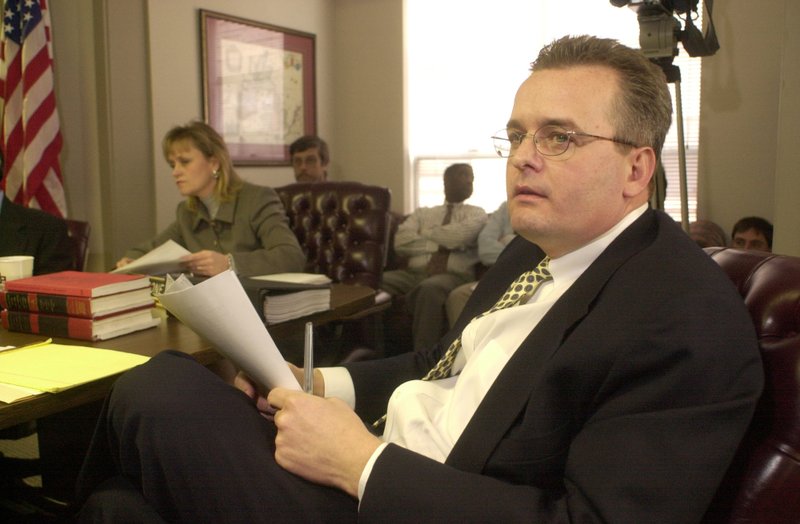 Graham Sloan, director for the Arkansas Ethics Commission., is shown in this file photo.

For next year’s elections, the amount that an individual can donate to a campaign would increase from $2,700 to $2,800 per election under an amendment to rules approved recently by the Arkansas Ethics Commission.

“The purpose of this rule is to establish a campaign contribution limit and give the public clear guidance on that limit,” the commission said in a summary of the rule change. “The presumed intent of the mandated adjustment is to keep the contribution limit in line with the rising cost of running a campaign.”

The Ethics Commission made this change, along with others, to its rules to conform with state laws. Lawmakers are to review the amendments in January.

The contribution change was made in accordance with Act 1280 of 2015, which requires that the limits for contributions by individuals be adjusted at the beginning of each odd-numbered year in an amount equal to the percentage certified to the Federal Election Commission by the Bureau of Labor Statistics of the U.S. Department of Labor under federal law as existing on Jan. 1, 2015.

On Feb. 7 of this year, the Federal Election Commission announced updated contribution limits that have been indexed for inflation and are effective for the 2019-20 federal elections, according to the Arkansas Ethics Commission.

During the current two-year election cycle, the limit for contributions by individuals to candidates for president, the U.S. Senate and the U.S. House of Representatives increased from $2,700 to $2,800 per election, the Federal Election Commission said.

Act 1280 was sponsored by then-state Sen. Jon Woods, R-Springdale, to help implement Amendment 94 to the Arkansas Constitution, which voters approved in November 2014. Amendment 94 increased the amount of time that state lawmakers can serve; barred direct corporate and union contributions to candidates; created a state commission to determine the salary levels of the state’s elected officials; and prohibited lobbyists from providing certain gifts to lawmakers.

Ethics Commission Director Graham Sloan said the recent increase in the individual contribution limit for 2020 “relates back to the first date candidates could have started accepting contributions for the 2020 primary.” The primary is March 3.

The Legislative Council’s Rules and Regulations Subcommittee will consider the Ethics Commission’s rule changes during its meeting in January, Sloan said.

“Once the revised rules have received subcommittee approval, final copies will have to be filed with the Arkansas Register and they become effective 10 days later,” he said.

In June, U.S. District Judge James Moody Jr. granted a preliminary injunction to prevent that law’s implementation until its constitutionality is decided. However, Moody stayed the order two days later at the state’s request, allowing the blackout period that has been in effect since 1996 to continue being enforced while the 8th U.S. Circuit Court of Appeals in St. Louis considers the appeal by the attorney general’s office.

Sloan said that the last increase in the individual contribution limit in Arkansas was from $2,000 to $2,700 per candidate per election under Act 1280 of 2015.

When state legislators and party officials said they first learned about the latest increase varies widely.

“My first donations I told everyone it was the old limit, but had a lobbyist tell me about the change around that time frame,” he said.

Senate Republican leader Bart Hester of Cave Springs said he was called a few months ago by a member who told Hester that state law “has us following federal guidelines now.”

Senate Democratic leader Keith Ingram of West Memphis said he was “unaware until I noticed $2,800 on campaign-finance reports and asked [about it in October].”

State Democratic Party spokesman Jacob Kauffman said, “To be honest. I don’t know when we learned of it. I feel like it occurred sometime during the last legislative session … but we’ve been operating under $2,800 since campaigns have started up.”

The Ethics Commission’s rules changes also include amendments to conform to new laws:

Act 879 of 2019, which made knowingly taking campaign funds as personal income a felony if the value exceeds $2,500.

Act 342, which bars a state elected official from registering as a lobbyist in any other jurisdiction.