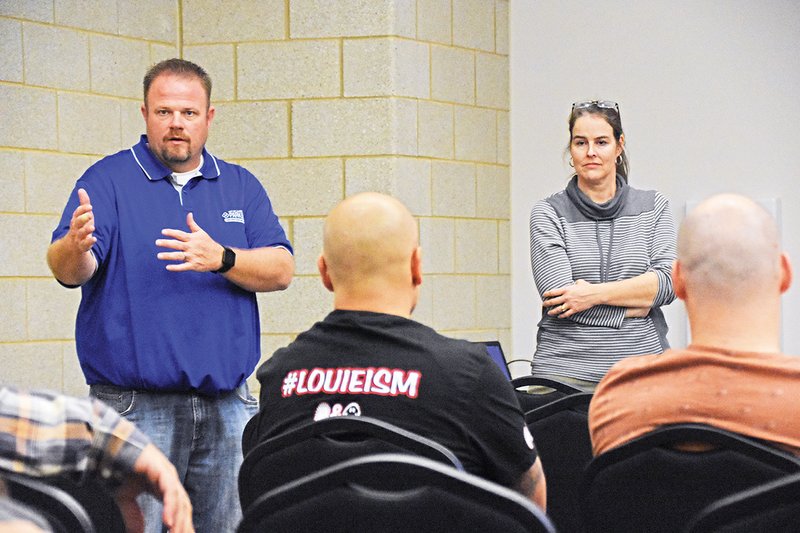 CABOT — Cabot Parks & Recreation officials hope to pedal in a new recreation element for residents of the area.

“Cabot doesn’t have a lot of mountain-bike trails, and central Arkansas doesn’t have a lot, either,” said Travis Young, parks and recreation executive director. “There are a few in North Little Rock and Little Rock, but we want to provide our citizens a quality-of-life experience.”

Young said he believes the department does a great job doing that through the sports system, but biking trails are an element that it doesn’t have.

“It is just another element that we want to offer to our citizens and to the people in the surrounding communities,” Young said.

“Last night served as a public forum and an opportunity for our citizens to give feedback,” Young said of the Nov. 19 meeting. “One of the great things about last night is that the attendees understand that we aren’t in the mountains, but we do have some elements that allow some versatility in the trails.”

Cabot Mayor Ken Kincade said the bike trail is needed for the development of the community.

“We have to, at all times, focus on the needs of our citizens and their well-being,” he said. “I’m excited to be a part of this addition to our great city.”

Young said the department had done a master plan back in 2015, and adding the bike trail was one of the things on the list.

“That’s what a lot of people talked about, and if you look at what is going on around the state, there has been this huge shift toward trails,” Young said. “About five years ago, there was a need for aquatic parks, then sports facilities, and now, what we see a lot of is the impact of trails.

“Here in Cabot, we want to offer diverse recreation. We have three walking trails, but the new bike trails will allow people to no longer have to drive to Little Rock or Hot Springs to use such trails. If they want to ride their bike for an hour after work, they have the opportunity to do it at home in the town where they live.”

Young said the master plan includes the addition of mountain-bike and walking trails that will cover 160 acres.

“This is just one element of that overall master plan, and that master plan was designed from specific data that was gathered from the people of Cabot,” Young said. “Trails were one of the high priorities.”

“The trail system brings people to your city, as well as lets people in your area enjoy their city instead of going to another city to ride,” Kincade said. “People are more health-conscious in the 21st century, and they want to unplug with nature.”

“The need has been here for a few years,” Young said. “While I’m not a biker myself, if you look, even over the past 10 years, more and more cities have become more biker friendly — especially in Northwest Arkansas.

“They are doing things not only on a state level, but a national level, with some of the parks they are building. Mountain-biking and what we are able to do is going to continue to grow.”

He said at the meeting Nov. 19 that there were some people in attendance who have never been on a mountain bike, but “they are interested because it is something new, and it gives them something to do close to home.

“And that’s exciting for them,” Young said. “It comes back to a personal preference. As there is more opportunity, there is going to be a better chance for growth. I expect once we get this up and going, you are going to start seeing some businesses that support it, such as bike repair shops, places to buy bikes and so forth.

“Currently, you have to go to a different city to get that. So as the demand comes, so will the business.”

Sally Horsey, senior landscape architect from Halff Associates, is the lead designer for the park in Cabot. She said this new addition will bring hiking, walking and biking trails to the city.

“We are looking at having some skilled areas for beginners so people can bring their families here,” she said. “They can start at the beginner level and learn some skills and, eventually, get on a little bit more aggressive trail system.”

She said the project will be constructed in stages.

“And as far as funding for the project, we will be applying for grants,” she said. “This is on property that the city already owns and has great access, thanks to the new interchange the city has built.

“It will be real easy for people to get to.”

Cabot has had a BMX track, which is part of the parks system, for years. Young said the new system might take up to a year to be put in place, and there is not yet a set cost.

“Once our master plan becomes finalized, we will have a better idea for the true cost,” Young said. “There will be several factors that go into it. You aren’t just clearing a way. You want water to shed off the trail so you don’t have an erosion issue, and there is an upkeep matter to it and how you maintain the trail.

“It is something we are dedicated to, but we don’t have the mountain-bike trails at this time — so it is all about growth and development.”

Young has been with the department since 2013 and has been the executive director since 2016. He said one of his goals as director is to connect Cabot with a trail and “get you where you want to go.”

“In Northwest Arkansas, you can ride from Fayetteville to Bella Vista on one trail, called the Razorback Greenway,” Young said. “We are hoping we can have something like it that connects to Jacksonville or Beebe.