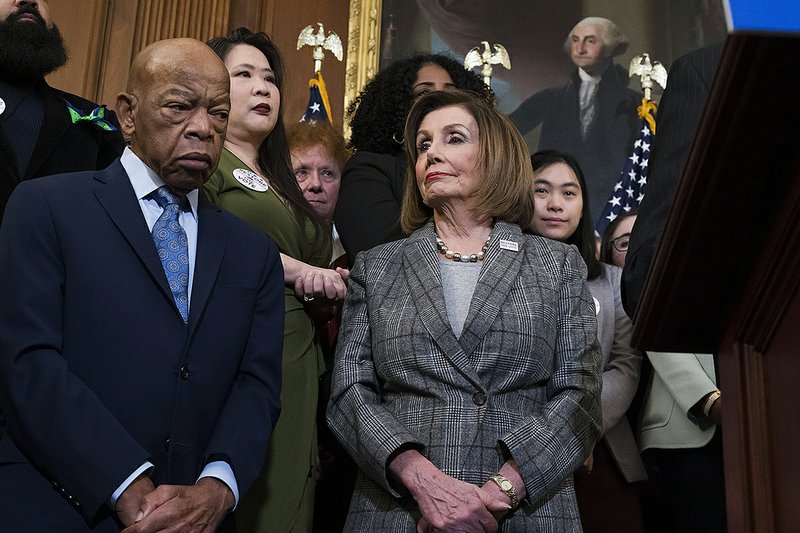 WASHINGTON -- The White House on Friday appeared to reject the latest entreaties from the House to participate in the ongoing impeachment inquiry, calling the proceedings "completely baseless" as Democrats continued with their push to impeach the president by the end of the month.

Pat Cipollone, the White House counsel, indicated to the House Judiciary Committee on Friday that Trump would not be sending attorneys to its hearing on Monday, when the panel responsible for drafting articles of impeachment will hear evidence from Intelligence Committee lawyers on the investigation into the president's conduct toward Ukraine.

The two-paragraph letter reiterated the White House's protests that the Democrats' impeachment investigation violated Trump's due-process rights. Cipollone did not explicitly say the White House would not participate in the House process going forward, but gave no indication that it would.

"House Democrats have wasted enough of America's time with this charade. You should end this inquiry now and not waste even more time with additional hearings," Cipollone wrote Friday to the Judiciary chairman, Rep. Jerrold Nadler, D-N.Y. "Adopting articles of impeachment would be a reckless abuse of power by House Democrats, and would constitute the most unjust, highly partisan, and unconstitutional attempt at impeachment in our Nation's history."

The White House declined to comment on the record about whether Cipollone's letter meant Trump was rejecting the invitation to participate in the House process.

But a senior administration official, who spoke on the condition of anonymity to discuss the president's position, said the White House sees no reason to participate because it says the process is unfair.

House Speaker Nancy Pelosi, D-Calif., "has already announced the predetermined result," the official said. "They will not give us the ability to call any witnesses."

"We gave President Trump a fair opportunity to question witnesses and present his own to address the overwhelming evidence before us," he said in a statement. "After listening to him complain about the impeachment process, we had hoped that he might accept our invitation."

Nadler had given Trump a Friday deadline to alert the committee on whether he or his aides wanted to take part in upcoming impeachment events.

Throughout the impeachment proceedings, the White House has blocked witnesses from testifying, declined to provide documents demanded by Democrats and did not send lawyers to the Judiciary Committee's first impeachment hearing on Wednesday.

Instead, the White House has largely looked to the Republican-controlled Senate to wage a full defense of Trump, who is accused of abusing the powers of the presidency when he asked Ukraine to investigate former Vice President Joe Biden and his son, Hunter, as well as the theory that Kyiv conspired with Democrats to interfere in the 2016 presidential election. The request came at a time when Ukraine's new president was seeking the delivery of U.S. aid to counter Russian military aggression and a White House meeting with Trump.

Pelosi has directed key committees to begin writing the articles, which could include an array of impeachable offenses such as bribery and obstruction of Congress. Members of the Judiciary Committee are scheduled to meet this weekend to discuss what those articles would entail. Democrats remain locked in an internal debate over expanding them to cover Trump's behavior outlined by former special counsel Robert Mueller's report on his investigation into Russia's interference in the 2016 election.

A White House spokesman said earlier Friday that Trump "welcomes" a Senate trial and reiterated that the president wants "serious witnesses" to appear, including the anonymous whistleblower who sparked the impeachment inquiry, House Intelligence Committee Chairman Adam Schiff, D-Calif., and the Bidens. What witnesses ultimately come forward in the Senate will depend largely on the senators themselves, since those 100 members will determine how, procedurally, an impeachment trial is structured.

"If it goes there, he wants a trial," the spokesman, Hogan Gidley, said on Fox News. "If they're going to do this, if the Democrats want this fight, it's something the president is willing to have."

Cipollone echoed that sentiment to Nadler.

"Whatever course you choose, as the President has recently stated: 'if you are going to impeach me, do it now, fast, so we can have a fair trial in the Senate, and so that our Country can get back to business,'" he wrote, quoting a tweet Trump posted Thursday.

Democrats pushed back against the White House's arguments for not taking part in the House process, arguing that its reasons continue to change.

"The White House said they wanted open hearings, not closed, and then they didn't want those either," Schiff tweeted Friday. "Then they said they wanted to participate in the proceedings, and now they say they don't. All they really want is to hide the President's serious misconduct."

Some House Democrats who supported the impeachment probe have yet to say whether they will vote to impeach.

"I can't say if I'd vote for or against something until I see it," said freshman Rep. Joe Cunningham, D-S.C. "Some of it seems connected. Some of it doesn't."

Democrats expect there will be two to four articles of impeachment against the president. Merging the Mueller findings into the overall charges by making the direct link to Ukraine might be one way to reach all sides.

Said Rep. Jamie Raskin, D-Md., a member of the Judiciary Committee, "You know we have to explore the possibility that the Ukraine episode is not some kind of aberrational outburst but rather reflective of a continuing course of misconduct."

The White House's latest criticisms of the impeachment process came as new questions began to surface about the activities of Trump personal attorney Rudy Giuliani, who returned to Ukraine this week to meet with people accused of spreading discredited theories about corruption and Ukrainian interference in the 2016 election.

He met a pro-Russia lawmaker Andriy Derkach, who claimed to have information about misspent American funds and who called for a joint U.S.-Ukraine investigation into his corruption allegations.

Derkach recently aired unfounded corruption claims against Hunter Biden related to the time he spent on the board of the Ukrainian energy company Burisma.

Giuliani was accompanied by a crew from the pro-Trump news network One America News, which boasted that it had debunked the impeachment allegations against Trump in its reporting of the trip. In a tweet, Giuliani claimed that Trump will ask that the claims made by the people he met in Ukraine be investigated.

"I don't know everything he's doing, who he's meeting with, what the conversations are," said Rep. Lee Zeldin, R-N.Y. "I would like to have more information to give you a better response."

Gidley, the White House spokesman, also declined to say whether Trump knew what Giuliani was doing abroad, or whether the president was comfortable with his lawyer's latest activities.

"I haven't spoken with him about that directly," Gidley told reporters at the White House. "But obviously Rudy Giuliani can speak for himself, he's the president's personal attorney."

But Giuliani's trip also came as Republican allies of Trump in the Senate continued to deepen their focus on Ukraine, particularly on the theory that Kyiv sought to hurt Trump during his 2016 campaign.

Three Senate committee chairmen announced Friday that they are seeking records and transcribed interviews from two people who, they claim, could bolster a notion advanced by Trump that "elements of the Ukrainian government were actively working to undermine" his prospects against Democrat Hillary Clinton.

"Contrary to the popular narrative in the 'main stream media' that Ukrainian involvement in the 2016 election has been debunked, or 'no evidence exists,' there are many unanswered questions that have festered for years," Homeland Security Chairman Ron Johnson, R-Wis., said in a statement.

Senate Minority Leader Charles Schumer, D-N.Y., fired back at the Republicans, warning that their efforts only risked damaging national security.

"When Vladimir Putin says stoop, Senate Republicans are asking: how low?" Schumer said Friday. "Putin and his intelligence services disinformation campaign team in Moscow couldn't have cooked up a more useful tool for spreading conjured and baseless conspiracy theories than the one Chairmen Graham, Grassley and Johnson announced today." 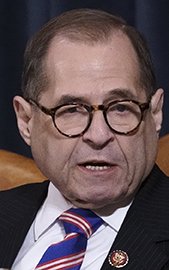 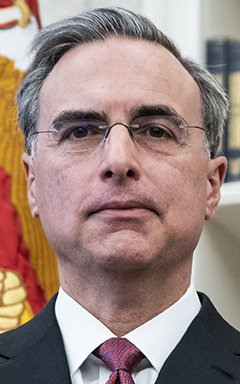 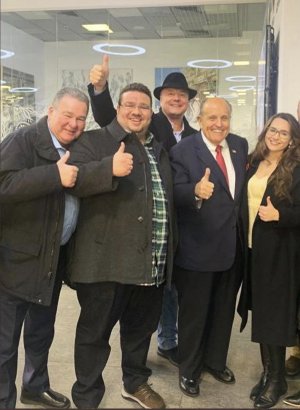 Photo by AP/ANDRII TELIZHENKO
Rudy Giuliani (second from right) poses with Andrii Telizhenko (second from left) and others at the Kyiv airport before departing Ukraine on Friday.