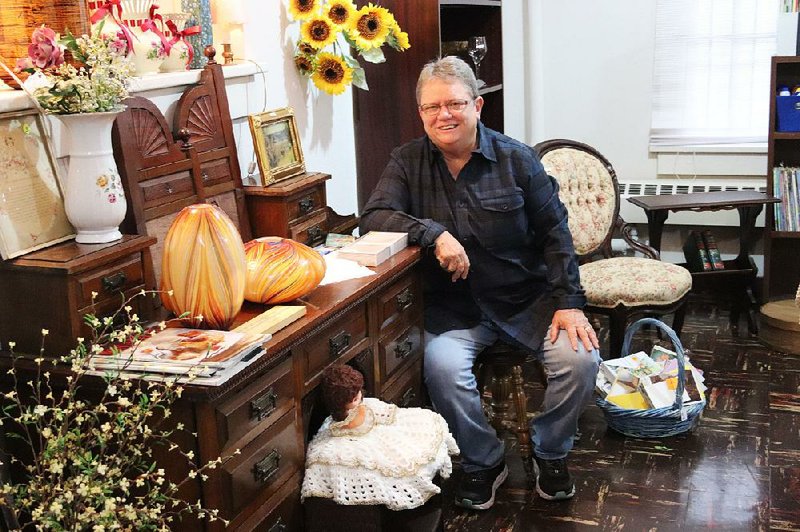 One of Lisa Smith’s jobs as a volunteer for Quapaw Quarter United Methodist Church is to help operate the church’s thrift store, open the first and the third weekend of each month as well as during special events. “Right now, we’re going on word of mouth and [signs] to make sure that we can keep this going, to be sustainable,” Smith says.

Going through the two rooms of Quapaw Quarter United Methodist Church's new thrift store would be enough to make any bargain shopper's or antique enthusiast's heart start to race.

There's a smart-looking pair of stools, $6 apiece. A small work of art in an elaborate picture frame, $3. A Victorian chair, mint condition, $70. Books, $2-3. A woven hanging depicting Scripture, $8. Pillows, $3 each. Clothes for children and adults; lots of toys for the former. Kitchen utensils. Even some old political buttons.

And the mother of all finds: An expansive, beautifully upholstered, mansion-quality chair bearing a matching pillow and said to be worth $1,500. Its thrift-store price is a tenth of that -- $150.

Better yet, haggling is encouraged here, says Lisa Smith, who helps operate the store as well as performing other volunteer activities at the historic downtown church.

The most popular items? "We've had complete stereo systems come through and of course they go pretty quick," she says. And the clothing -- "We've had people from out of state stop by and look at our vintage clothing." Some of the better works of art have been snapped up quickly also.

"We think we have something for everybody," Smith says. "Sometimes we get [so] many items in here that it overwhelms everyone. So we try to see what might catch someone's eye."

Smith is among the band of volunteers who has helped make the store an early success. She says she's there to be of what help she can to the church's pastor, the Rev. Gail Brooks, and administrator, Anne Holcomb.

But then, Smith has been volunteering at the church since she first came there in 2004. Working with its Community Breakfast, which serves more than 200 people a week, "was my ... ministry of volunteering" in those early days, she says.

Then Smith and her wife, fellow volunteer Sandy Bidwell, stepped back a bit, getting involved in outside activities that kept them away from the church on the weekends. They ultimately decided to get back into volunteering in the community. Maintenance help was needed around the church, so Smith -- who likes to work outside anyway -- signed up to help take care of the lawn and other physical aspects of the church building, which is currently for sale.

As Smith tells it, the thrift store got its start when a fellow church member, who has an estate-sale business, went to the church leadership board last summer and suggested opening a thrift store to help raise money to pay bills and insurance. The board went for the idea and asked for volunteers to convert two rooms that formerly served as the church's food pantry.

"There were ... six or seven of us [who] painted all the walls and got the floors looking good," Smith recalls. "And then we said 'Well -- now we need to stock it.'"

Also realized was the need for someone to schedule store workers. Smith was asked to perform that task, along with pricing items. "I have a list of volunteers, and I ask them if they can donate three, four hours of their time on a Friday or Saturday."

The store opened in September. It operates the first and the third weekend of each month, and during special events such as SoMa After Dark in Little Rock's South Main District, and, in October, the Arkansas Cornbread Festival.

Church members, along with their friends, donate items to be sold.

About those donations. They'll take "just about everything," Smith says. The church bulletins include lists of desired items. That list may include kitchen wares and decorative items as well as seasonal/holiday items.

"We try to be reasonable with the prices. A lot of people have said that we're doing good on the pricing," Smith says. "It's fun. It's interesting to watch people; to see what they buy."

Some donations are from the estates of deceased, and an eBay-like auction system is in the works to sell any fine jewelry or valuable antiques that are donated, she adds.

The thrift store represents just one of the programs of the busy Quapaw Quarter United Methodist. "There's a lot of things going on in this church that people don't realize," Smith says. Again, there's the Community Breakfast, served at 9 a.m. on Sundays, as well as Stone Soup, a meal served at 3 p.m. Sundays.

The church also distributes sack lunches through the week. Smith and Bidwell also participate in this program, in which volunteers bring in sack lunches on Sunday and drop them off. Monday through Friday, the lunches are distributed to those in need. "It's a busy place. And downtown, [such programs are] needed," Smith notes. "If ... we run out of sack lunches or breakfast or whatever, we help provide [the hungry] with a location where they can go."

Smith, who even pitches in to help keep the church gutters clean, enjoys working with the other church volunteers, as well as talking to the folks who come in off the street. "This is just a very welcoming, open, loving place to be," she says. "We are openly and actively a reconciling church, which means that we are an LGBTQ-affirming church. So we're basically open to all people. Everyone's welcome. ... We have a nice family of, variety of, people.

"This is our safe place. I feel safe here."

Smith has donated a goodly amount of time and talent elsewhere. She and Bidwell have both worked with the International Gay Rodeo Association as part of its production crew. For nearly 20 years, the couple has traveled around the country helping various groups to put on rodeos and even loading livestock -- the bulls, the steers -- at the events. But with the rodeos being on weekends, they'd been gone a lot. "We're trying to pull back a little bit and settle back down and enjoy our animals at the house and do some things for ourselves that we hadn't done," such as travel for pleasure, Smith says.

In addition, Smith and her wife work with the Diamond State Rodeo Association, of which Bidwell is president. The association works with various charities -- such as the Puppy Up Foundation, a national organization working to discover the common links between canine and human cancers, and their causes; Hearts & Hooves, a therapeutic riding center in Sherwood for those with special needs; and Out of the Woods Animal Rescue of Arkansas -- assisting them in their fundraising efforts and volunteering to help them with their activities.

Smith is retired from the Army National Guard as well as the state. But, she says, "I stay pretty busy between the rodeo association and [the thrift store]."

She says she'd like to see the hours extended for the store as well as for it to get on everyone's radar. Plans are being made to add a third room. "It may [someday] be a four-room store. That's kind of what I'm pushing for.

"But it does take a lot of processing in, and then pricing, and then working it." 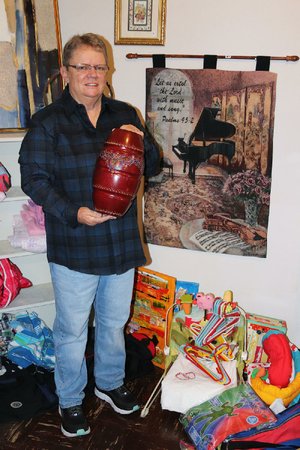 Photo by Arkansas Democrat-Gazette/HELAINE R. WILLIAMS
The goal of the new thrift store at Quapaw Quarter United Methodist Church — at which Lisa Smith schedules her fellow volunteers to work — is to pay church bills and insurance. “We’re experimenting on the hours and the days,” she says. “We try to catch businesspeople on Friday and then your shoppers on Saturday.”