VIDEO: A wonder of the Ozarks world 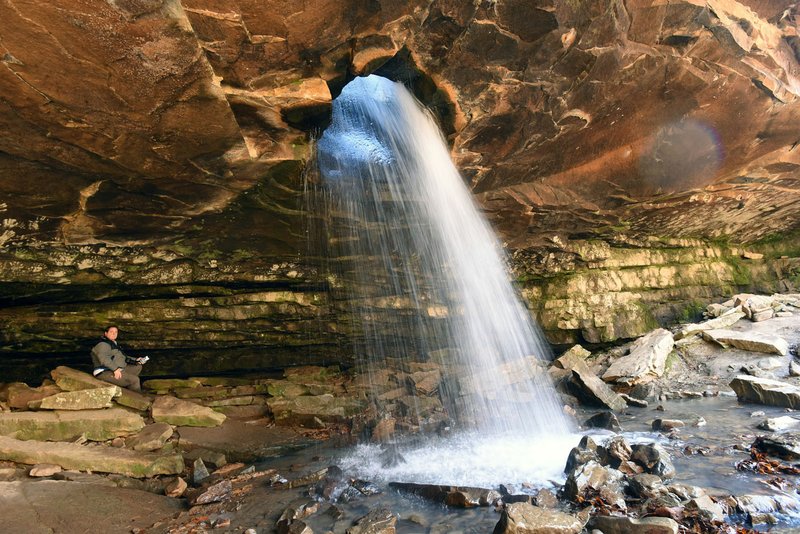 NWA Democrat-Gazette/FLIP PUTTHOFF Glory Hole waterfall pours through a hole in a rock shelf Nov. 8 2019 in the Ozark National Forest. It's a 1-mile hike from Arkansas 21 to the waterfall and a mile hike out for a 2-mile round-trip. Alan Bland of Rogers takes in the view of the unique cascade.

Just like that, the fast-flowing mountain stream vanishes, only to appear again as one of the most fascinating waterfalls in the Ozark National Forest.

Glory Hole waterfall is born when the stream disappears into a hole at the top of a rock shelf. The cascade emerges in all its glory from the bottom of the same hole.

Over time, the creek has drilled the round breach through the rock to create the Glory Hole.

The shimmering shaft of water looks almost spiritual, as if the rock is a shelf of threatening clouds and the waterfall is a glorious light beaming down from the heavens.

Glory Hole is one of the wonders of the Ozarks world and easy to get to.

It's a jaw-dropping sight, this Glory Hole. Truly a Mecca for waterfall wanderers from the Ozarks, across the United States and beyond. Two local hikers found that out during a visit Nov. 8.

"Where y'all from?" Alan Bland of Rogers asked a couple strolling to the waterfall. "Canada," the man and woman said in unison. "We've never been to Arkansas before, so we thought we'd come and see the sights."

That, and it's about 50 degrees warmer in Arkansas than their Canada home in November.

Bland said howdy to another group and asked the question. "Iowa," the hikers replied. A third bunch hailed from Tulsa.

"It's easy to see why people come from all over to see this," Bland said.

Getting to the Glory Hole is a joy in itself. There's the beautiful drive through the Buffalo River country, then a hike down the stream that has a quirky name.

Dismal Creek, it's called. Why the dreary name?

The stream is anything but dismal. It's a narrow, clear flowing ribbon that drops over ledges and crags all the way to the Glory Hole, a grand finale of a gorgeous hike.

Hikers marveled at the creek swirling and vanishing into the hole. From the top, people scrambled down boulders on the right to see the cascade roaring out the other side.

"This is nature at its best. The epitome of the Ozarks," Bland said. "How that water comes pouring through with that much volume is something. It's the most unusual waterfall I've seen."

The Glory Hole is one of those Ozark landmarks that gets lots of visitors. When Bland parked his pickup at 9 a.m. at the trail's start, there was one other vehicle. Two hours later there were a dozen.

Used to be there wasn't a sign marking the Glory Hole trail. One just had to know where it was. Now a small sign marks the start of the path. The trail follows an old logging road for about one-quarter mile, then turns right on the hiking trail that leads to the Glory Hole.

Parking is an issue. There's no parking lot. Visitors park as best they can on the west side of the highway. Best to visit the waterfall early in the day and go during the week if possible.

Print Headline: A wonder of the Ozarks world