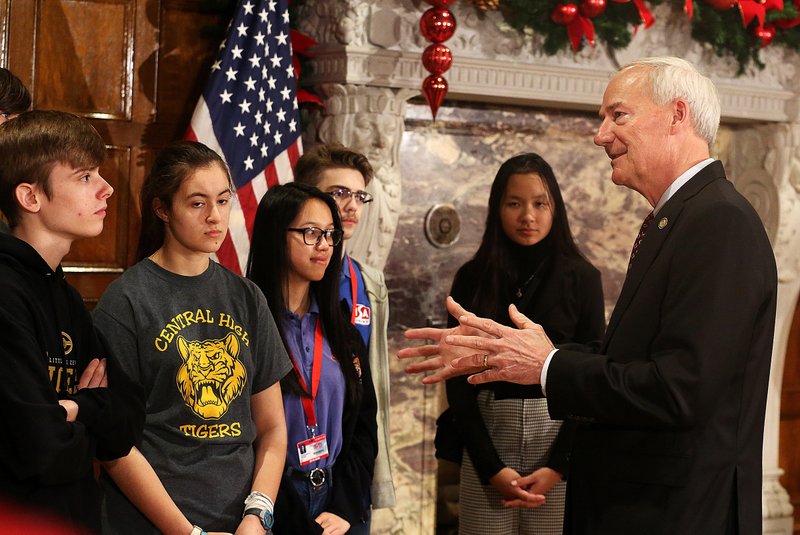 Arkansas Gov. Asa Hutchinson talks with high school students about the state’s interest in computer science after a news conference announcing a new computer science and cybersecurity task force Friday at the Capitol.

The courses could prepare students to attempt industry-level certification out of high school or continue their cybersecurity education in college, said Anthony Owen, state director of computer science.

The courses can be provided on high school campuses or through Virtual Arkansas. Three will be developed by May 30, and teacher training will begin in the summer, said John Ashworth, Virtual Arkansas director.

To fund the initiative, the Arkansas Department of Education is providing a grant of $94,500, and Arch Ford Education Service cooperative is providing two subgrants of $25,000 to UALR for developing and assessing the CyberGym.

Cybersecurity is a high-paying career field with not nearly enough candidates for employment, according to Albert Baker, chairman of UALR's computer science department. About 5,000 jobs exist in Arkansas, and more than 1,000 are unfilled, he said. Average starting salaries range from $90,000 to $125,000.

But Arkansas is forward-thinking, Baker said, and on the right path to fulfilling the economy's needs.

"This is going to be a great thing for the students of Arkansas," Ashworth said.

The impact doesn't have to be limited to filling an employment gap.

Most of the time, he said, breaches are caused by the end user, such as a person clicking on a malicious attachment in an email.

At the very least, the cybersecurity courses will create a more "cyber-literate" population that can learn how to better protect itself, he said.

What UCA is building -- with $500,000 in state support -- is the state's first cyber range, which is a more secure, U.S. Defense Department-level virtual environment that limits the number of students who can access it to 28.

By helping high school students, the universities get to showcase their offerings, which Owen said can help with recruitment.

The university is looking at hosting a cybersecurity summer camp, which Leiterman said should be just as popular as the other camps. She described student interest in the STEM camps as "out of control," with waiting lists.

The university wants to get young children interested in STEM, targeting middle schoolers and explaining to them that computer science jobs aren't just in big cities. A lot of what people do in cybersecurity and other areas can be done remotely, Leiterman said.

People who don't want to leave their hometowns don't have to.

Owen said cybersecurity jobs follow two major tracks: analyst and specialist. An analyst monitors traffic and alerts others to suspicious activity. A specialist develops the tools used by the analysts.

Students are not guaranteed certification or jobs upon completion of the high school courses, but students who do well in all of the courses should be prepared to attempt certification, Owen said. Certification could lead to employment right out of high school.