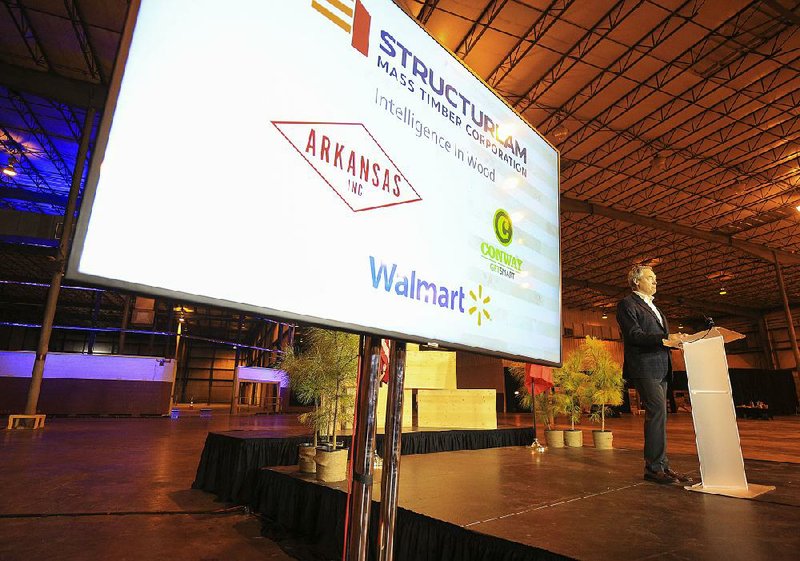 Hardy Wentzel, CEO of Structurlam Mass Timber Corp., said during Monday’s announcement in Conway that the opportunity to form a strategic partnership with Walmart lured the timber manufacturer to Arkansas.

CONWAY -- A Canadian timber manufacturer will invest $90 million and hire 130 employees as it creates its first U.S.-based production facility in Conway. The facility is projected to open by mid-2021.

Structurlam Mass Timber Corp., the leading mass timber manufacturer in North America, announced Monday that the Conway plant's first customer will be Walmart, which will use 1.1 million cubic feet of cross-laminated timber produced at the plant to build its new headquarters in Bentonville.

This will be an end-to-end Arkansas project: Trees grown in Arkansas soil will be harvested by Arkansas loggers and produced at an Arkansas facility to be used by an Arkansas company.

"Together, we are creating a future based on an innovative product that is transforming commercial building construction across North America," Structurlam Chief Executive Officer Hardy Wentzel said. Cross-laminated timber is a super-strong wood panel produced by gluing together layers of sawed lumber. There are low levels of waste resulting from the production process.

The project has roots in Walmart's plan to build a headquarters using pine trees grown in Arkansas. Dan Bartlett, executive vice president of Walmart corporate affairs, said the company was committed to using Arkansas-grown timber for the project. The challenge: There were no facilities in the state equipped to handle production.

"We didn't know if it was possible to manufacture the product here in Arkansas," Bartlett said, noting that the company considered shipping the pine outside the state, and perhaps outside the country, for production. "The more we looked at it and discussed it, that just didn't make sense," Bartlett said.

Walmart approached Structurlam and decided to invest in production to bring the company to Arkansas. "This was more than just a purchase order for us," Bartlett said. "We understood the capital investment it would take to do this here and that's when the conversation shifted to what it would take for us to be a financial partner."

Ironically, the timber will be produced in a 288,000-square-foot facility that was built to manufacture steel fasteners for Nucor Steel. Work to convert the facility will begin next month and timber production will begin in 2021.

Structurlam, based in British Columbia, is investing about $10 million to upgrade the plant. About 100 hourly employees will be hired for production work and another 30 managerial positions will be added, Wentzel said. Structurlam's annual payroll will start at about $5.5 million, with plans to increase it to $7 million.

About one-third of the facility's manufacturing capacity will be dedicated to producing timber for Walmart.

"This near turnkey facility is ideally located in close proximity to a large supply of sustainable timberlands that produce southern pine lumber, accessible transportation corridors and major construction markets in the southern U.S.," Wentzel said.

Mass timber is replacing concrete and steel as a more efficient and sustainable structural building material, Wentzel said. Structurlam claims it leads the industry with more than 250 mass-timber projects delivered since 2015. Mass timber is used in six-story mid-rise construction -- and in the near future buildings up to 12 stories in Canada and 18 stories in the U.S. will use the product.

"Combined with our operations in B.C., we will be the largest mass timber producer in North America with technical support services and a project delivery team that is unmatched," Wentzel said. 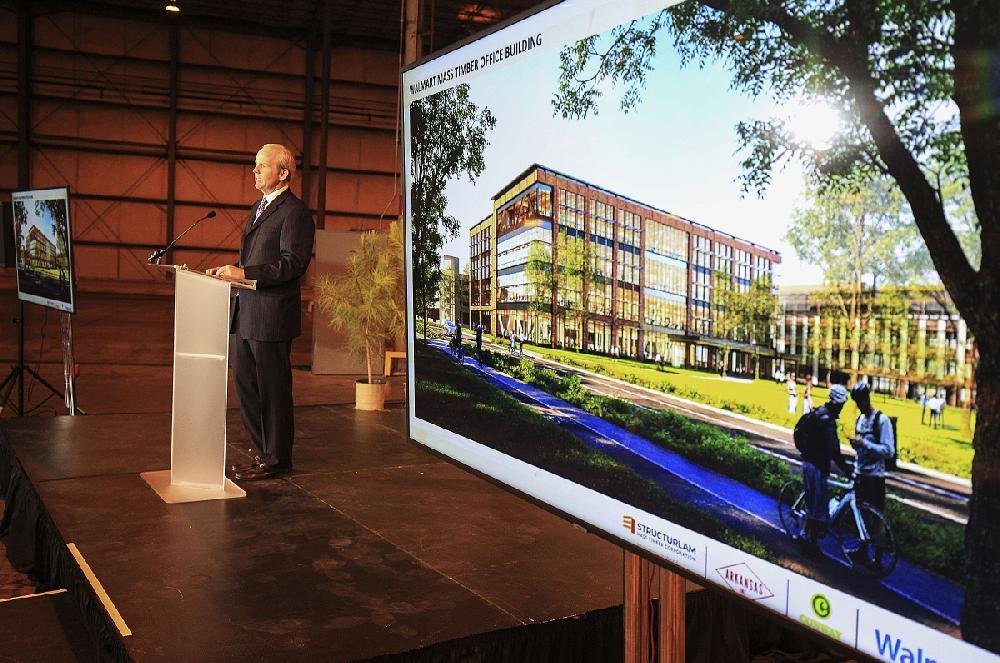 “This was more than just a purchase order for us,” Dan Bartlett, Walmart’s executive vice president of corporate affairs, said of the company’s partnership with Structurlam Mass Timber Corp. The timber company will produce 1.1 million cubic feet of cross-laminated timber for Walmart’s new headquarters.

Conway will be used as a base to launch satellite operations, Wentzel said, noting that Structurlam will add sales offices in Atlanta, Dallas and Nashville, Tenn., to win other clients. "We'll have a windshield-wiper approach that covers from Texas to across the Southeast and the Mid-Atlantic region," Wentzel said.

Walmart's involvement landed the manufacturing operation in Arkansas, but the state's plentiful supply of timber provided attractive bait. Arkansas has 19 million acres of timberland, covering more than half the state.

"This is a dynamic boost to our timber industry in Arkansas," Gov. Asa Hutchinson said in announcing the expansion. The stage for the announcement was framed by the company's cross-laminated timber products and pine saplings.

The timber industry, Hutchinson said, plants 1.6 trees for every one that is harvested, providing a foundation for continued growth. "This is sustainable long into the future," the governor said. "We need to be able to have this kind of production. This is the key to the future direction we want to go in Arkansas."

Structurlam's CEO also noted the natural beauty of the state and abundance of trees in making the announcement, which was simulcast to the company's headquarters in Penticton, British Columbia. "Being here today in Arkansas feels like home," Wentzel said.

Besides Penticton, the company has two other production facilities in British Columbia. In addition, Structurlam has sales offices in Portland, Ore.; Sacramento, Calif.; and Austin, Texas. The company began operations in 1962 and has about 290 employees today.

Structurlam's first production facility in the United States will be located at 8100 Sturgis Road. It's a familiar neighborhood for the governor, who was in Conway six weeks ago to announce DXC Technology would create 1,200 jobs at its offices in the city. DXC and the Structurlam facility are less than a mile apart.

The governor also announced Monday that timber produced at the plant will be used to build the new dormitory at the Fire Training Academy in Camden.

Walmart declined to reveal details about its financial investment in Structurlam, which is privately owned. "It was a significant enough amount to make sure the project could take place," Bartlett said.

In addition to the Walmart support, Structurlam is receiving a $1.5 million cash infusion from the governor's quick action fund. The company also will receive an annual cash rebate based on the number of jobs it adds and refunds on sales taxes for the purchase of building materials, machinery and equipment associated with the project.

Efforts to prepare the Conway operations will begin quickly.

"We need to renovate, install new machinery, expand our U.S. sales force, hire our operations teams in Conway, certify our products, and finally, make our first delivery to Bentonville," Wentzel said. "How lucky are we to seize this moment and grow together along with the state of Arkansas, the city of Conway and the sustainable forest industry that makes it all possible."

Walmart's new headquarters, referred to as the "home office," will cover about 350 acres in Bentonville. Work at the site began in July with demolition of some existing structures, along with construction of infrastructure and utilities. The project is expected to be completed in 2024 and is the largest headquarters project in the country using mass timber as its primary material, the company said.