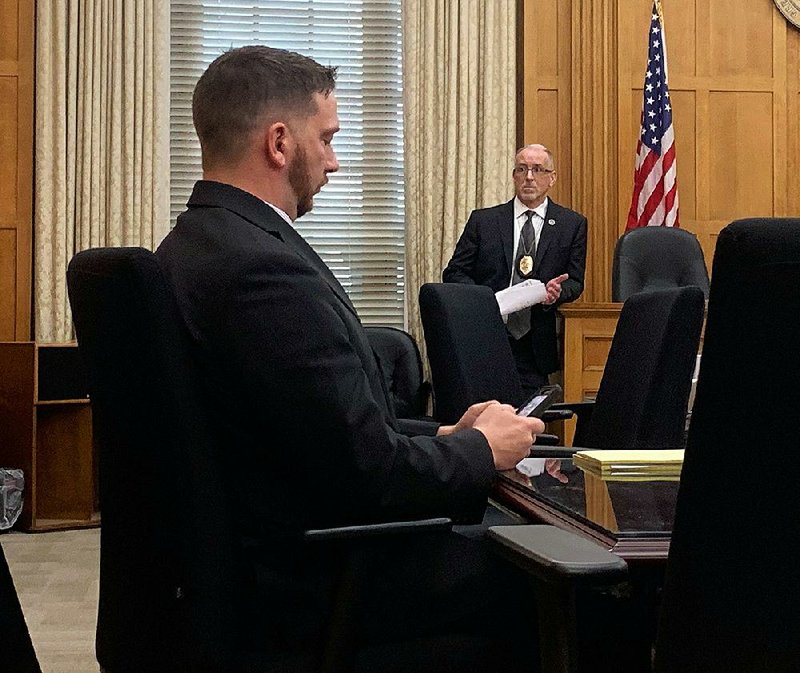 After brief testimony from a retired police investigator, Fox said attorneys for both sides will have until Dec. 20 to turn in summary briefs, and he will make a decision afterward.

"If at all possible, I try to rule from the bench. That's not possible in this case," Fox said, citing the size of the file he needed to review as slowing down the process.

Starks was fired after he shot and killed the 30-year-old Blackshire during a confrontation in a parking lot at 7305 Kanis Road near South Rodney Parham Road. Starks, who fired about 15 times, shot Blackshire after the stolen car Blackshire was driving rolled forward, striking the officer's hip. After firing a volley of shots, Starks moved in front of the vehicle, which rolled forward and struck the officer, who continued to fire.

Prosecutors declined to charge Starks in the shooting, but the city opted to terminate his employment.

Newcomb asked what punishment Stephens would have given Starks, had he investigated the officer's actions.

"I'd have given him 10 days suspension and retraining," Stephens said.

Khayyam Eddings, an attorney representing the Police Department, asked Stephens whether he was in Starks' chain of command and whether internal affairs investigators choose disciplinary action for officers. Stephens answered no to both.

The other witnesses Newcomb had planned to call were dismissed. Fox told the court he did not want to rehash material that had already been covered in the 15-hour Civil Service Commission hearing earlier this year.

The Civil Service Commission, a seven-member civilian oversight board for the Little Rock police and fire departments, agreed in a unanimous vote on Sept. 4 that Starks had violated a department policy that states an officer may not place himself in front of a moving vehicle in a manner where deadly force is a probable outcome.

Fox said the court reporter's transcribed hearings were more than 1,000 pages. He also has copies of the investigative file.

"I spent the greater part of last week, when I wasn't on the bench, reviewing those 1,000 pages," Fox said. "There were 16 witnesses. It was really very thorough. ... I've told the parties [that] anything in that file there's no need to go over."

Eddings, of Friday, Eldredge & Clark LLC, said a few of the witnesses were dismissed after Fox granted his motions to exclude. Two witnesses, both officers, Eddings said, would have testified about former police encounters with Blackshire. Eddings said he objected on the basis of relevance.

Newcomb, however, said that there were some files that were excluded from the Civil Service Commission hearings that Fox included, such as Blackshire's autopsy, which showed that the man had methamphetamine, PCP, marijuana and cocaine in his system when he was killed.

Fox did not allow Newcomb to call an expert witness to testify about the effects those drugs would have on a person's mind.

Newcomb said he also "proffered" testimony from Assistant Chief Alice Fulk saying she did not think Starks should have been fired, which was excluded from the Civil Service Hearing.

Fox explained that in the instance where a witness does not testify but an attorney wants to enter the summation of their testimony for the record, the attorney may tell or "proffer" that information to the judge, and it is entered in the official record.

"Anytime you have a case of this nature ... you're not going to be happy with the outcome," Newcomb said. "But I think the judge was fair with us."

Fox said Tuesday that he understood the hearing was "anti-climatic," but that he still had much to review before he could make a decision.

"This is much more like an iceberg that's heavier underneath than you can see on the surface," Fox said. "... Alright. I'll be anxiously awaiting what you all have to say, and I'll try to get a decision on it then."