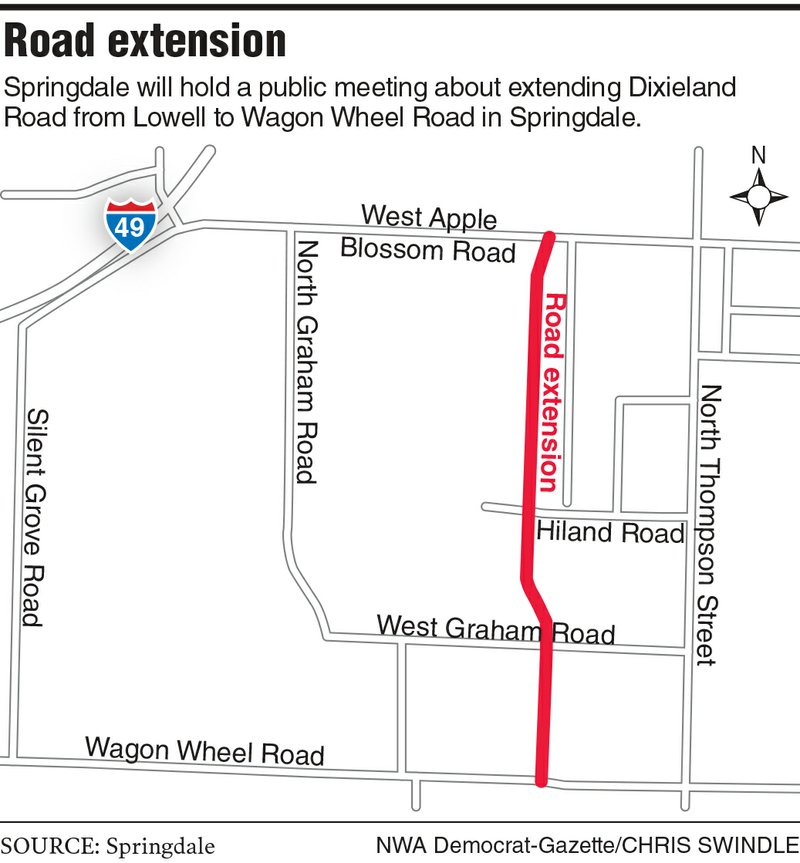 SPRINGDALE -- The extension of Dixieland Road into Springdale will hopefully lighten the load on nearby Interstate 49, officials said.

The equivalent of the estimated population of Springdale -- 79,000 vehicles -- travels Interstate 49 just north of Springdale each day, according to Arkansas Department of Transportation reports on its website.

What: Dixieland Road extension in Springdale

Springdale will host a public information session on the conceptual route for the road from 5 to 7 p.m. today at the City Administration Building.

Springdale's Dixieland Road will join a portion of Lowell's South Dixieland under construction. Lowell started work in July to extend the road south seven-tenths of a mile from where it ends in a corn field to Apple Blossom.

Dixieland won't run exactly parallel to Interstate 49 through the area, but will lie about a half mile from the interstate, said Steve Lawrence, the state Transportation Department's district engineer based in Harrison.

"We are growing rapidly, and we have a lot of traffic," said Tom Conklin, the assistant director of the Northwest Arkansas Regional Planning Commission.

"Most of the cities up and down the Interstate 49 corridor have been working for another north-south route to move regional and local traffic."

Springdale Mayor Doug Sprouse said the new stretch of Dixieland will provide opportunities for development related to the corporate headquarters of J.B. Hunt Transport in Lowell -- and another way to access Interstate 49 for employees. The extension Lowell is building starts just south of the company's campus.

Sprouse said plans also show the future route of the U.S. 612 bypass crossing Dixieland, with an interchange and more opportunities nearby.

Springdale hopes to build an extension of Hiland Road west to the new Dixieland, which would provide another way to access North Thompson Street, said Brad Baldwin, the city's director of engineering and public works.

Springdale's City Council in July approved a contract of $357,300 with Garver engineering to design the portion of Dixieland through Springdale. Garver also designed the Lowell stretch of the road, Baldwin said.

The regional planning commission awarded $5.4 million of federal highway money for cities to contribute to the extension project, Conklin said. Springdale officials will tap the 2018 bond fund for road improvement to construct its part of Dixieland, Sprouse said.

Sprouse said Springdale officials will add their city's portion of the federal money to those of Johnson to extend Gene George Boulevard south to Johnson Mill Boulevard. The city also will use federal money as they become available to extend Don Tyson Parkway west to Arkansas 112, he said.

Baldwin said the city has received money to design both projects and construct the first phase of the George extension from the roundabout at Dearing Road south to New Hope Road. That portion of the road will serve staff and patients of Highlands Oncology Group's Springdale location under construction.

He also said no houses lie in the path of the Dixieland extension. "It's all a green field," he said.