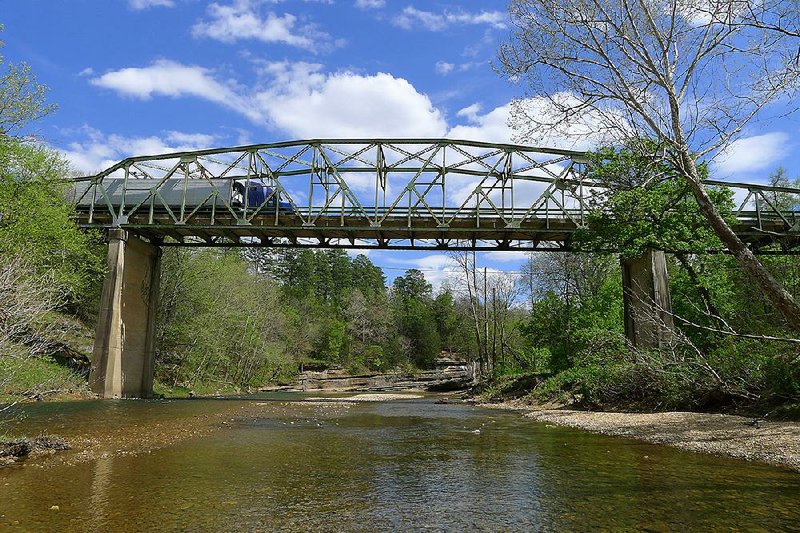 The Arkansas Highway and Transportation Department plans to tear down this 1931 bridge over the Buffalo National River at Pruitt after a new bridge is constructed.

Construction work has begun on a new bridge over the Buffalo National River at Pruitt Landing.

It will replace an 88-year-old bridge that's scheduled for demolition.

Some people aren't happy about that.

"If they tear it down, we're going to lose a bunch of our heritage in Arkansas," said Arlis Jones, a Newton County justice of the peace who lives near Marble Falls.

For at least 16 years, Newton County has pondered the fate of the old bridge, which is 72 miles north of Russellville on Scenic Arkansas 7, where the town of Pruitt once existed.

The old bridge has become something of a white elephant.

The state has offered to give it to the county, but for years, the consensus seems to be that the county can't afford the upkeep.

The bridge is within the boundary of the Buffalo National River, but the National Park Service doesn't want it either.

"The National Park Service is not in a position to take over this state asset," said Mark Foust, superintendent of the Buffalo National River. "Financially, we would have to divert significant funding from other park assets and operations to manage this structure, even as a pedestrian/bike path."

Arkansas 7 is the main artery through Newton County. About 2,400 vehicles per day travel over the bridge at Pruitt. That includes about 200 big trucks.

The sight of a new bridge being built over the Buffalo River has jarred some Newton County residents into the realization that the old bridge will soon be torn down.

But Jones said he's having trouble stirring up a comparable amount of anger in his fellow Newton County Quorum Court members.

"Apparently, I'm the only one who's wanting to keep it," he said. "It is a historical bridge."

Jones recently provided a packet of bridge information to the Quorum Court. In it, there are two letters from then-County Judge Harold Smith saying the county would take the bridge.

"Newton County will except [SIC] ownership of the Pruitt bridge, for historic preservation for our county," Smith wrote to the Arkansas Highway Commission on Feb. 10, 2004.

On Oct. 11, 2007, Smith wrote a letter "To whom it may concern" saying "Newton County is asking for ownership of the Pruitt bridge to be left in place for historical purposes."

The packet also contains a 2004 "memorandum of agreement" indicating the state highway department was giving the bridge to Newton County. It's signed by Smith, but not by Dan Flowers, who was then director of the Arkansas Highway and Transportation Department (now the Arkansas Department of Transportation).

Mark Whitmore, chief legal counsel for the Association of Arkansas Counties, said the county judge has authority to accept a bridge from the state. As the county's chief executive, the county judge is over roads and bridges, Whitmore said. He said the decision wouldn't involve any quorum court.

But the two subsequent county judges have said "no thanks" to the offer of a free bridge.

Jones wants the Newton County Quorum Court to ask for a circuit court ruling to put a hold on plans to demolish the bridge until it can be determined whether Smith's acceptance of the bridge takes precedence over the decisions of subsequent county judges. The Quorum Court has tabled the matter until January.

"You'd think there would have to be some kind of legal actions if one judge said they wanted it," Jones said.

State Rep. Keith Slape, R-Compton, said if Newton County decides it wants the bridge, "I will bust my tail to find out if there's some money there to help them."

Slape said he and state Sen. Breanne Davis, R-Russellville, are looking into the matter.

In 2008, Kevin Cheri, the former superintendent of the Buffalo National River, wrote the highway department saying that the park "is willing to take ownership and management responsibility" for the bridge.

But Foust said that changed by 2010, when Cheri told the state that the National Park Service could not accept the bridge.

Former state Sen. Randy Laverty of the Pruitt area is backing Jones in his effort to save the old bridge.

"I hope he's successful," Laverty said. "It's a landmark on the river. I would certainly love to see the old structure saved. I'm sure it would be an attraction."

Laverty said the bridge is significant because it's one of the last man-made structures that people remember from before 1972, when the National Park Service acquired property along the river and demolished many houses to create the Buffalo National River park. The town of Pruitt dried up as a result.

"This bridge is unique," Laverty said. "It's emblematic of the displaced culture that was a downside effect of the nationalization of the river."

Laverty said Flowers told him years ago that the highway department would kick in $100,000 for maintenance if the county accepted the old bridge.

Steve Lawrence, district engineer for the Arkansas Department of Transportation's office near Harrison, said that's about what it will cost to remove the old bridge.

Meanwhile, rust is slowly replacing the faded green paint on the span.

Motorists still pull off of Scenic Arkansas 7 to take pictures of it.

The two-lane bridge is only 20 feet wide, leaving little room for error when two large trucks meet on it, Lawrence said.

The new bridge will be 200 feet east of the old one.

The new bridge will be 45 feet wide and include a 5-foot-wide sidewalk on one side, protected from the traffic lane by a concrete and metal barrier wall.

Instead of 10-foot-wide traffic lanes, the new bridge will have 12-foot lanes with 8-foot shoulders.

The old bridge is a steel-truss design built in 1931 by Fred Luttjohann of Topeka, Kan., who constructed several bridges in Arkansas. Construction of the Pruitt bridge cost $55,226, which translates to $940,700 today, based on inflation.

The metal for the bridge was made by the Virginia Bridge and Iron Co. of Roanoke.

The 375-foot-long bridge includes a Pennsylvania main span, two end spans and a girder approach on the south end, according to the Historic American Engineering Record.

Jones said the old bridge could be used as part of a pedestrian and bicycle trail. Maintaining a bridge for pedestrian use would be cheaper than upkeep for one that's enduring daily truck traffic, he said.

Lawrence said he couldn't provide a dollar figure last week on what it has cost to maintain the Pruitt bridge.

Lawrence said he understands why locals are sentimental about the old bridge.

"There's been generations of people who have driven across that bridge," he said. "There are some people over there who are passionate about that bridge. We understand that. When we build a new bridge, the federal requirements are that the old structure be removed or somebody else has to take possession of it."

Foust said the park service is working with the state and county to memorialize the bridge with a mural at the Newton County courthouse in Jasper.

He said brochures will be available to explain the bridge's history. Laser scans and a digital three-dimensional model of the old bridge will be made available at https://bit.ly/2RPYMtD.

A historical marker describing the Pruitt bridge's historical significance and displaying a picture of the old bridge will be installed in the easement as close as possible to the original site, he said. 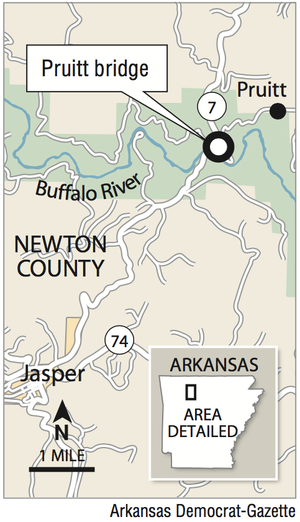