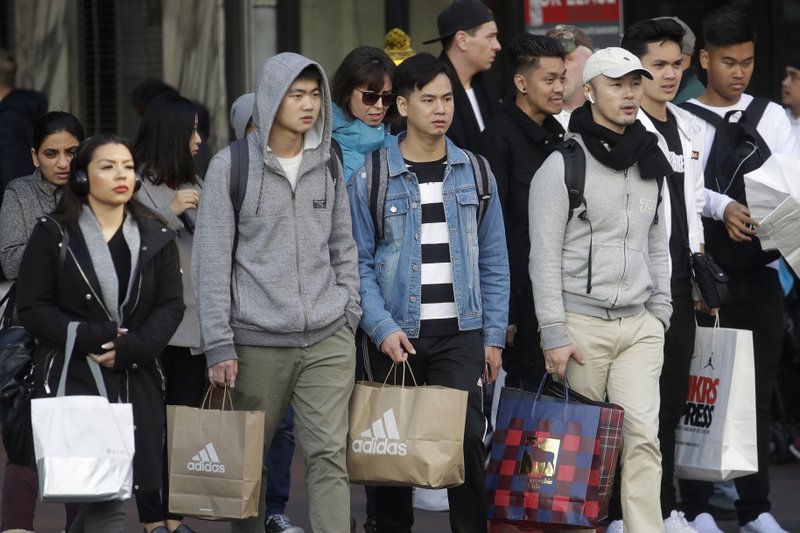 FILE - In this Nov. 29, 2019, file photo shoppers carry bags as they cross a street in San Francisco. Black Friday kicks off the start of the holiday shopping season. On Friday, Dec. 20, the Commerce Department issues its November report on consumer spending, which accounts for roughly 70 percent of U.S. economic activity. (AP Photo/Jeff Chiu, File)

WASHINGTON -- Americans increased their spending in November at the fastest pace in four months, and income growth rebounded to its strongest gain since August, offering hope for a solid Christmas shopping season.

The Commerce Department said Friday that consumer spending rose at a 0.4% annual rate last month, led by a jump in spending on durable goods like automobiles. It was up from a more modest annual gain of 0.3% in October, and it was the best showing since July.

Incomes rose 0.5% after a weak reading in October, reflecting a surge in hiring last month in which employers added 266,000 jobs, the most since January.

A separate report Friday from the University of Michigan showed consumer sentiment in December increased for a fourth month to the highest level since May, though was little changed from the preliminary reading.

Analysts for Wells Fargo said Friday that consumers are "in bright spirits ... at the height of the critical holiday shopping season."

Spending over the long Thanksgiving holiday weekend, including online sales, broke records, according to retail analysts. Black Friday hit a record $7.4 billion in U.S. online sales as many shoppers spent the day clicking instead of lining up to buy.

It was the second-biggest U.S. online sales day ever, behind 2018 Cyber Monday's $7.9 billion, according to a survey of 80 of the top 100 U.S. online retailers from Adobe Analytics.

Black Friday's significance as the bellwether of the Christmas shopping season has waned in recent years, as more shoppers take their holiday dollars to online retailers, and stores stretch out sales and promotions over the weeks surrounding Thanksgiving. But the season is still crucial for American retailers, and in turn the entire U.S. economy.

Sales over the final few months of the year can account for up to 40% of retailers' annual revenue, and consumer spending on goods accounts for more than 20% of the nation's economic activity.

Economists are expecting consumer spending, which accounts for about 70% of economic activity, to remain solid in the final three months of the year to support continued moderate economic growth. They are forecasting growth of around 2% in the current October-December quarter, similar to the 2.1% gain of the third quarter.

Consumer inflation, as measured by the Federal Reserve's preferred price gauge, was 1.5% in November compared with 12 months ago. That's still well below the Fed's 2% annual inflation target, and it helps validate the central bank's decision to keep interest rates low with little fear of igniting inflation.

The Fed has highlighted below-target inflation as a reason it could cut its benchmark short-term rate three times this year to aid an economy that was being slowed by uncertainties from the U.S.-China trade war and a global slump. The central bank has signaled that it expects to keep rates unchanged through 2020.

Last month's 0.4% increase in consumer spending was led by a 1% surge in spending on durable goods such as autos and appliances.

The saving rate edged up to 7.9% of after-tax income in November, compared with 7.8% in October.

U.S. consumer expectations for inflation over the longer term fell to the lowest on record in December, according to the latest University of Michigan sentiment survey.

Respondents expect annual inflation of 2.2% over the next five years, the lowest in data back to the late 1970s, final December figures from the university showed Friday. Year-ahead price expectations were revised down to 2.3%, the tamest since the end of 2016, from a preliminary reading of 2.4%.

The university's final December consumer sentiment index was 99.3, little changed from the preliminary figure of 99.2, and up from November's 96.8 and a seven-month high.

Information for this article was contributed by Martin Crutsinger of The Associated Press; by Reade Pickert and Vince Golle of Bloomberg News; and by Sam Dean, Julia Barajas and Priscella Vega of the Los Angeles Times.