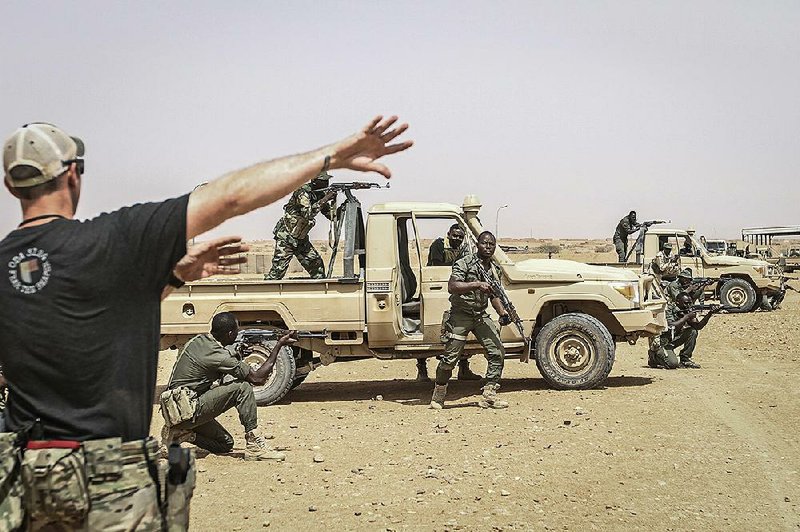 A U.S. Special Forces sergeant directs troops for Niger during a training exercise in Agadez, Niger, in April. U.S. officials reportedly are considering a large-scale drawdown of American forces in West Africa, including abandoning a recently built drone base near Agadez. (The New York Times/Tara Todras-Whitehill)

WASHINGTON -- Defense Secretary Mark Esper is weighing proposals for a major reduction -- or even a complete pullout -- of U.S. forces from West Africa as the first phase of reviewing global deployments that could reshuffle thousands of troops around the world, according to officials familiar with internal deliberations.

The discussions of a large-scale pullback from West Africa include abandoning a recently built $110 million drone base in Niger and ending assistance to French forces battling militants in Mali, Niger and Burkina Faso. The deliberations stem from a push to reduce post-9/11 missions battling terrorist groups, and instead to refocus Pentagon priorities on confronting powers like Russia and China.

With an initial decision about Africa expected in January, the plans are sure to draw criticism from lawmakers, allies and military officials, and could eventually affect most global missions in some way. About 200,000 U.S. forces are currently stationed abroad, similar to the force posture when President Donald Trump took office with a promise to close out the nation's "endless wars."

But Trump is not so much ending wars as he is moving troops from one conflict to another, and Esper's initiative aims to carry out that rebalancing.

Officials say the overhaul of Africa deployments will be followed by one in Latin America, and that drawdowns will happen in Iraq and Afghanistan, as has been expected.

The initiative reflects what has become the defining priority for Esper: moving away from 18 years of counterterrorism deployments in places troubled by militancy and insurgency where thousands of U.S. troops cycle through in an attempt to maintain minimal stability but without much prospect of definitive solutions.

"We've begun a review process where I'm looking at every theater, understanding what the requirements are that we set out for, making sure we're as efficient as possible with our forces," Esper said this month.

The details of planning for troop reductions in West Africa have been closely held in the Pentagon, and Congress has not been consulted, officials said. Esper's decision could also affect other agencies: The military's ability to provide swift backup for security at diplomatic and intelligence compounds in troubled parts of the world has been a heightened concern since the 2012 attack on outposts at Benghazi, Libya.

The primary mission of the U.S. troops has been to train and assist West African security forces to try to suppress Islamist groups like Boko Haram and offshoots of al-Qaida and the Islamic State group. As part of that mission, four American soldiers were ambushed and killed two years ago while on patrol in Niger.

Esper's team has questioned the value of those efforts and wants to scale back missions to counter militants who lack the demonstrated ability and intent to attack the United States on its own soil, the officials said. None of the terrorist groups operating in West Africa is said to meet this heightened assessment standard.

President George W. Bush's administration conducted a similar internal debate after the Sept. 11, 2001, attacks and initially targeted only those terrorist groups bent on attacking civilians in the West -- in particular al-Qaida.

But at the same time, Bush blurred the distinction between al-Qaida and the Taliban, an Islamist militant group focused on imposing Shariah law in Afghanistan. He blamed and attacked the Taliban for having provided a haven for Osama bin Laden and his followers.

Early internal criticism about the new proposals has focused on whether any U.S. withdrawal would create a vacuum for other countries to fill, undermining their strategic purpose. Also at question is whether they would risk a breakdown of stability that could sharply increase the flow of refugees and other migrants north into Europe.

Esper has given Africa Command until January to draft a withdrawal plan, as well as a plan for redeploying troops.

The defense secretary also is considering significant cuts in the Middle East. In the coming months in Iraq, officials said, Esper may cut U.S. presence to 2,500 troops from 5,000. And he has already conveyed a desire to withdraw about 4,000 of the nearly 13,000 troops now in Afghanistan.

But these changes, perceived by some as seismic, run the risk of confrontation between the Pentagon and the four-star generals who lead the regional headquarters.

Gen. Stephen Townsend, the newly appointed head of Africa Command, has struggled to articulate the need for U.S. forces in Africa to confront China and Russia, which are vigorously expanding their influence economically and militarily across the continent and in its surrounding waters.

And Gen. Kenneth McKenzie Jr., who is in charge of U.S. troops in the Middle East, often has lobbied for more forces in the region to deter and confront Iran, including overhead surveillance aircraft and troops.

But the Pentagon's proposed drawdown in West Africa also runs at cross-purposes with a new State Department initiative to combat a resurgent Islamic State there. "ISIS is outpacing the ability of regional governments and international partners to address that threat," Secretary of State Mike Pompeo said last month at a meeting of nations fighting the terrorist group.

He also created a special task force to focus specifically on deteriorating security and other problems in the sub-Saharan region that stretches from Senegal to Sudan and has been seized by growing waves of terrorism and armed conflict.

Esper's initiative, though, has alarmed key allies, including France, which has around 4,500 troops in West Africa who are taking the lead in fighting Islamic State and al-Qaida insurgents there. The French rely on U.S. intelligence, logistics support and aerial refueling -- at a cost to the Pentagon of about $45 million a year.

Esper has made no attempt to hide his desire to reshuffle U.S. forces around the world. In October, during a news conference in Kabul, Afghanistan's capital, he said he was asking all of his commanders to look for areas "where they can free up time, money and manpower to put into our top priorities as chartered by the National Defense Strategy: China, No. 1; Russia, No. 2."

The Pentagon's review of forces takes place as Trump keeps promising to end what he calls the United States' "endless wars," an attempt at fulfilling a 2016 campaign pledge.

No wars have ended, though, and more troops have been deployed to the Middle East in recent months than have returned home.

Independent analysts praised Esper's effort to review force levels but warned that the new emphasis on confronting China and Russia should not mean neglecting other global hot spots.

"The demands on U.S. forces are high, and bringing supply and demand into equilibrium is a challenge the department shouldn't dodge," said Kathleen Hicks, a former top Defense Department official now at the Center for Strategic and International Studies. "But the formula will need to be nuanced."

Africa Command is the first of the Pentagon's global fighting commands to come under what is being called a "blank slate" review. There are about 6,000 to 7,000 U.S. troops in Africa, with the largest numbers concentrated in the sub-Saharan region and in the Horn of Africa. In Somalia, there are about 500 special operations troops fighting al-Shabab -- an al-Qaida-linked terrorist group -- from small outposts alongside African troops.

Esper's proposed cuts would most likely focus on the several hundred troops now deployed in countries like Niger, Chad and Mali. The Air Force recently started flying Reaper drone missions from the new base, known as Air Base 201, near Agadez, Niger.

In the past year, the Pentagon has shrunk its forces in Africa by reducing several hundred special operations forces on the continent as part of the troop shift.

Ahead of their impending reviews, some commands are taking steps to promote their troops' operations. Southern Command, which oversees missions in Latin America, is now publishing a weekly digital newsletter. A recent bulletin mentioned the deployment of a Navy plane to help search for a missing Chilean air force plane as well as the participation in a disaster-relief exercise with Panamanian troops.

For Central Command, the proposed cuts in Afghanistan and Iraq would follow significant cuts already made in northeastern Syria: Troops there were reduced to 1,000 from 2,000. The order -- an effort to follow the president's demands to withdraw all U.S. troops from the region -- was later partly reversed to help prevent the Islamic State from recapturing valuable oil fields.

Even in regions where U.S. force levels are likely to remain steady or even increase, the Pentagon is pressing host nations to pay a larger share of the costs.

For instance, Esper recently pressed the South Korean government to pay up to $5 billion a year to support the 28,500 U.S. troops in the country -- more than five times the amount Seoul agreed to pay this year. Negotiations continue.

And in Saudi Arabia, the Pentagon has started negotiations to recoup billions of dollars in "partner burden-sharing" costs. The United States recently deployed 3,000 air defense and other troops to help protect the kingdom after a drone and missile attack on oil fields, which Washington blamed on Iran. 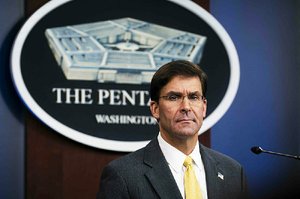