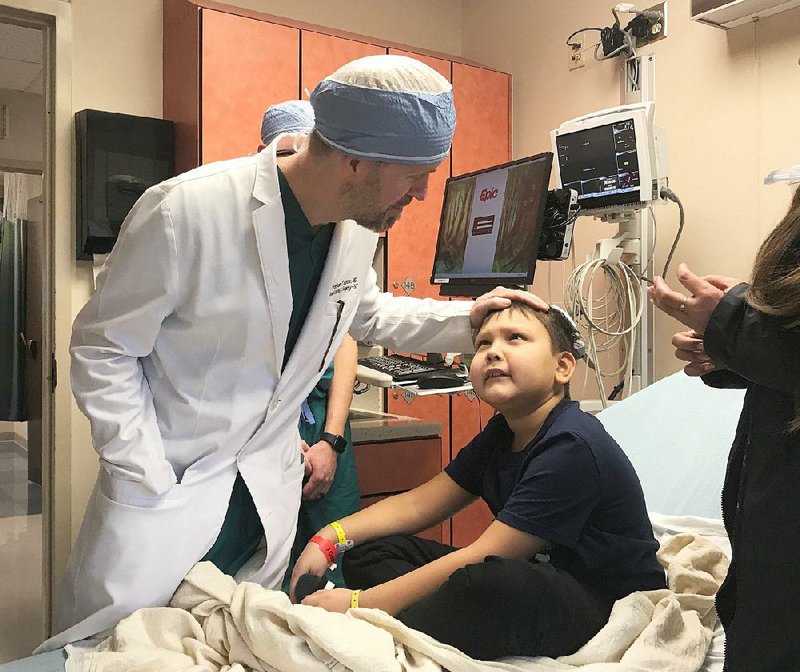 Dr. Gresham Richter, professor and pediatric otolaryngology chief at the University of Arkansas for Medical Sciences and Arkansas Children’s Hospital, talks with 8-year-old Mikhail on Oct. 29, in advance of a procedure to treat a venous malformation. (Arkansas Democrat-Gazette/Kat Stromquist)

More than 5,000 miles from his home in Moscow, Mikhail was unruffled.

One morning in late October, the 8-year-old sat up in bed at Arkansas Children's Hospital in Little Rock, sorting through thimble-size models of Spider-Man, Thor and other superheroes he'd stored in an empty Pringles tube.

Holding out a cupped palm full of the characters, he offered a toy to his doctor, Gresham Richter, as a gift.

"He wants you to choose one hero," Mikhail's translator, Nazira Khaidakova, told the physician, who selected the Incredible Hulk.

Mikhail was preparing for treatment of a venous malformation. He's among the international patients from countries such as Israel, Russia, China and Ukraine who have sought help for related conditions at the children's hospital.

Richter -- a professor and pediatric otolaryngology chief at the University of Arkansas for Medical Sciences and Arkansas Children's Hospital -- says his team is one of a few in the U.S. known for work on the group of conditions called vascular anomalies.

"You would probably not suspect you would have an international referral pattern [in Arkansas]," he says, "[but] it's because of the expertise, and because it's been supported by the hospital.

"We're breaking down the barriers here ... for them to get treatment."

Richter says word of mouth, such as through online support groups, has brought a handful of patients from Eastern Europe for treatment with the Little Rock team over the past few years.

While those countries are industrialized, their hospitals and doctors don't have "the technology, the lasers or the knowledge base" to offer the best possible treatment to patients, he says.

Through the translator, Mikhail's mother, Mariia Pak, said their journey began when Mikhail was just 4 months old and the family noticed a lesion on his cheek.

In photos, it appears as a smudge-like mark -- like a grown-up's thumbprint -- creating a small bulge inside his upper lip.

The family unsuccessfully consulted specialists in Russia and Germany before hearing about the Arkansas program, she said. Pak began communicating with Richter's team with the help of email and Google Translate.

But as they scheduled his first procedure in July, visa issues cropped up, she said. They'd had to appeal to the Russian Consulate for help, explaining Mikhail's condition and that they had already paid for his procedures.

With their travel documents sorted out, the family boarded the first of three planes for a 24-hour journey to Little Rock, one of two such trips they'd take this year.

"You get pretty connected with the families," Richter says.

According to a 2016 article in the journal Cardiovascular Diagnosis and Therapy, about 1-2 of every 10,000 people are born with a venous malformation, in which some veins don't develop normally.

Structural problems make the veins bulge or expand. Depending on where the malformation is, it can cause swelling, darkened bluish patches on the skin or functional difficulties, potentially interfering with important processes like breathing.

Thought to be linked to a genetic mutation, venous malformations are challenging for doctors to treat, in part because they tend to come back.

Richter traces his interest in vascular anomalies back to early research he did on pulmonary hypertension, which can reshape blood vessels in the lungs, as well as his taking part in difficult 30-hour surgeries earlier in his career.

"We were resecting these massive malformations, and they would bleed the whole time," he says. "I said to myself, 'There's got to be a better way to do this.'"

He now uses "multimodal" treatments that can include surgery, laser and drug treatment. In Mikhail's case, Richter incorporated laser therapy called selective photothermolysis and an injection of bleomycin, a chemotherapy. The dual-pronged treatment should shrink the veins and attack cells to keep the abnormality from returning.

In an operating room in October, about 10 medical professionals gathered with Richter to assist with Mikhail's procedure, donning protective glasses as a powerful laser hummed to life.

Richter also directs research at Arkansas Children's Hospital on vascular anomalies, studies that are concentrated in a small number of U.S. labs, he says.

While experts now have a sense of what genes are linked to venous malformations, he thinks more research is needed to totally eradicate the condition.

"Medical tourism" to the U.S. is on the upswing, a 2015 report from the U.S. International Trade Commission says. An estimated 100,000 and 200,000 air travelers (excluding patients from Mexico and Canada, who could arrive by land) arrive for health treatments each year, with most of them saying they are seeking more advanced care.

Travel going the other way also is growing, with an estimated 150,000 to 320,000 Americans flying to seek health care in other countries annually.

Those travelers mostly cite financial reasons, as care outside the U.S. can be cheaper even for uninsured patients, the report said. Central America, South America and the Caribbean are among the most common destinations.

Richter says he is regularly asked to train doctors abroad or to lecture at international meetings, but for work here in Arkansas, technology is key. He often hears from prospective patients by email, where they send photos and medical records.

He also chairs the hospital's international patient care committee, which considers the cases of global patients in need and sometimes offers financial assistance.

Because patients often require more than one treatment, they have a chance to get to know Little Rock. Mikhail's family, for example, planned visits to the zoo and a pumpkin patch during their most recent visit.

Mikhail had especially been excited about wearing a costume and a Halloween mask because the celebration isn't such a big deal in Russia, Pak said.

Richter says the October visit may have been the family's last. Depending on how Mikhail responds, there may not be a need to schedule him for another treatment.

"That type of patient who in the past would require big resections and surgeries, and a lifelong of interventions, are now sending emails to [the nursing and team coordinator] and myself [saying], 'We're doing fine; we don't need any treatment right now,'" he says.

"That's a huge step in the right direction."