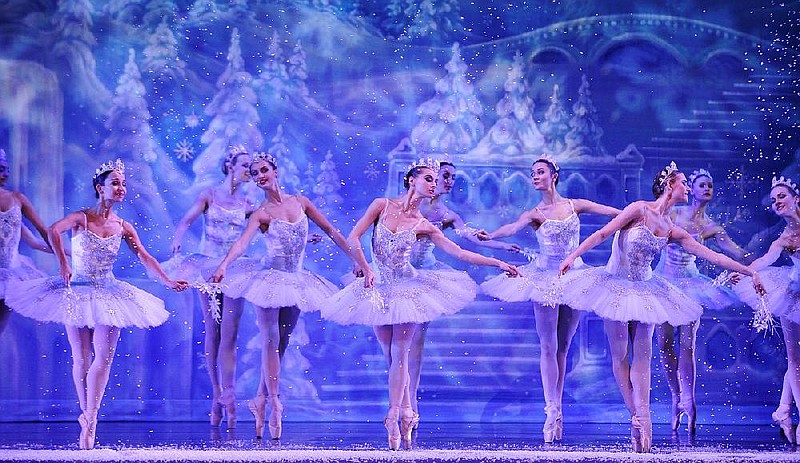 The Massachusetts-based touring company of 36 dancers, trained in Russia, Ukraine and Kazakhstan, where ballet is Big (that, by the way, is what "Bolshoi" means in Russian) did a fine job of bringing an updated but still Russian version of Peter Ilich Tchaikovsky’s classic ballet to a small but appreciative audience Thursday afternoon at Little Rock’s Robinson Center Performance Hall.

Alexandra Elagina did a delightful job of "growing" the central young girl (Masha in Russian, known as Clara in most American productions), in whose dream the magical nutcracker she has received for Christmas turns into a handsome prince (Kostyantyn Vinovoy) who defends her from a rodent army, then leads her through a snowy landscape into a fantasy world where the residents dance a series of regional variations in her honor.

This version, unique to Moscow Ballet, sets the second act, not in the Kingdom of the Sweets, but in the Land of Peace and Harmony, where their guide is the Dove of Peace (Aidana Amirkhanova and Rafael Urazov, who prove that this is probably the only place in this political atmosphere where left and right wings can comfortably coexist, and who also brought down the house with very athletic performances of the Arabian Variation).

Unlike American Claras, touring Russian Mashas have to work; Elagina and Vinovoy also excellently covered the snow pas de deux and, gold-spangled, the Sugar Plum Fairy (whose solo Elagina delicately aced) and her Cavalier. (Alisa Aleekseva and Shota Onodera, who starred in the French Variation for the matinee, dance the lead roles for the evening performance.)

The production features sumptuous costumes and impressive backdrops and 12-foot puppets (elephant, bull, bear and a particularly charming French unicorn). The new peacock with an 8-foot spreadable tail was impressive but the thrill paled quickly.