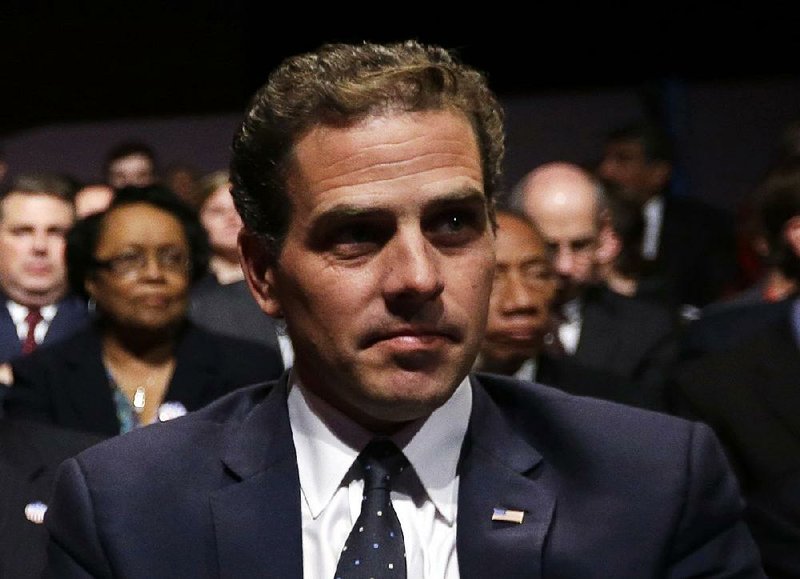 FILE - In this Oct. 11, 2012, file photo, Hunter Biden waits for the start of the his father's, Vice President Joe Biden's, debate at Centre College in Danville, Ky. In 2014, then-Vice President Joe Biden was at the forefront of American diplomatic efforts to support Ukraine's fragile democratic government as it sought to fend off Russian aggression and root out corruption. So it raised eyebrows when Biden's son Hunter was hired by a Ukrainian gas company. President Donald Trump prodded Ukraine's president to help him investigate any corruption related to Joe Biden, now one of the top Democrats seeking to defeat Trump in 2020. (AP Photo/Pablo Martinez Monsivais, File)

Days after a judge rejected a Florida private investigator's attempt to become part of Hunter Biden's Arkansas paternity case, the investigator filed a motion seeking to intervene in the lawsuit.

Dominic Casey of D&A Investigations in Longwood, Fla., filed a motion Friday to intervene in the Independence County Circuit Court case, claiming to have access to financial records that show wrongdoing by the former vice president's son.

Clinton Lancaster, the attorney for Lunden Alexis Roberts, the woman suing Biden for child support, said earlier this week that Casey's allegations, which were included in a Monday pleading, appeared to be salacious.

Casey's Monday pleading -- filed as a "Notice of Fraud and Counterfeiting and Production of Evidence" -- was rejected by Circuit Judge Don McSpadden and ordered struck from the record because Casey had not followed the proper procedure to intervene in the case. McSpadden will have the option to rule on Friday's motion on whether Casey should be permitted to intervene.

"We are aware of Mr. Casey's new filing seeking intervention," Lancaster said in a Friday email. "Our firm is not associated with Mr. Casey. A process server or some agent attempting to serve Ms. Roberts reached out to our firm today. Our only contact with Mr. Casey was to let him know that we will accept any service for Ms. Roberts. At this time, we are still reviewing his motion."

The motion references Biden's overseas dealings in Ukraine and China that have been criticized by Republicans during the impeachment inquiry into President Donald Trump. Biden's foreign business activities coincided with the time his father -- former vice president and Democratic presidential candidate Joe Biden -- was in office.

Roberts filed the paternity suit in May, claiming that she and Hunter Biden were in a relationship that resulted in the birth of "Baby Doe" in August 2018.

Last month, Biden told the court that he is unemployed and without monthly income since May. Roberts' attorneys told the court earlier this week that Biden had failed to provide all of the financial information that McSpadden ordered, and they urged the judge to hold him in contempt of court.

Asked this week about his intervention in the case and who had hired him to investigate Biden, Casey said in an email that due to the nature of his investigation "privilege applies, sources and methods are protected," saying that findings of the investigation are posted on his agency's website, dgator.com.

Biden's attorneys couldn't be reached for comment on Friday, but they denied Casey's allegations in a motion to strike Casey's Monday notice.

"The Notice is a scheme by a non-party simply to make scandalous allegation in the pending suit to gain some quick media attention," wrote Brent Langdon, an attorney for Biden.

Casey entered the public eye as a private investigator for Casey Anthony, the mother whose young daughter's disappearance in 2008 went unreported for 31 days. Anthony was later found innocent in her daughter's death.

Casey was sanctioned by a federal judge in 2016 after making sensational allegations about Anthony's guilt in her bankruptcy case then skipping several depositions, according to the Orlando Sentinel.

Information for this article was contributed by Frank E. Lockwood and Bill Bowden of the Arkansas Democrat-Gazette.