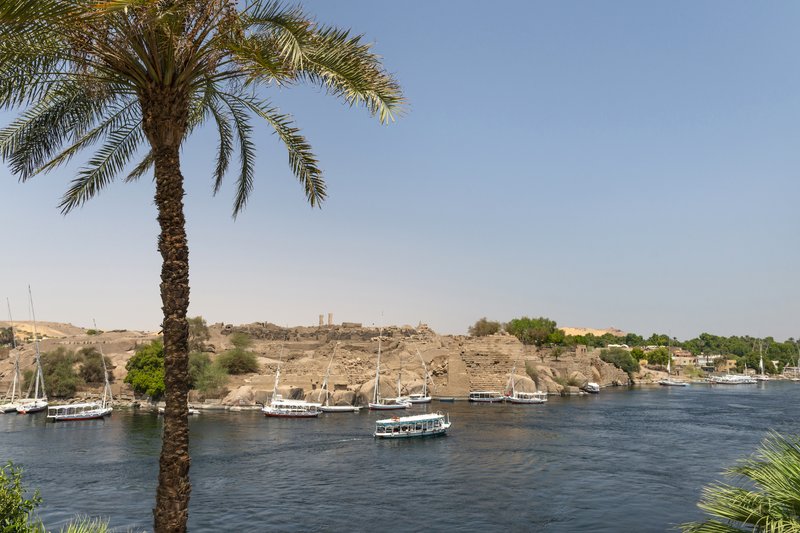 As they did in the 1800s, river boats still cruise the the waters of the Nile, taking adventurous tourists on a voyage back in time. An anthology of letters and memoirs by women travelers can serve as a guidebook and a look into the more recent past. (The New York Times/Maria Mavropoulou)

Huddled on a chaise on the upper deck of the Orient, the dahabiya that I had chosen for a cruise down the Nile, I sipped hibiscus tea to ward off the chill. Late in February, it was just 52 degrees in Aswan, where I had boarded the sailboat, but the scenery slipping past was everything the guidebooks had promised: tall sandbanks, curved palms and the mutable, gray-green river, the spine of Egypt and the throughline in its history.

I'd been obsessed with Egypt since childhood, but it took a cadre of female adventurers to get me there. Reading Women Travelers on the Nile, a 2016 anthology edited by Deborah Manley, I'd found kindred spirits in the women who chronicled their expeditions to Egypt in the 19th century. And spurred on by them, I'd planned my trip.

Beside my chair were collections of letters and memoirs written by intrepid female journalists, intellectuals and novelists, all British or European. Relentlessly entertaining, the women's stories reflected the Egyptomania that flourished after Napoleon invaded North Africa in 1798. The country had become a focal point for artists, architects and newly minted photographers — and a fresh challenge for affluent adventurers.

Their dispatches captured Egypt's exotica — vessels "laden with elephant's teeth, ostrich feathers, gold dust and parrots," in the words of Wolfradine von Minutoli, whose travelogue was published in 1826. And they shared the thrill of discovery: Harriet Martineau, a groundbreaking British journalist, feminist and social theorist, described the pyramids edging into view from the bow of a boat. "I felt I had never seen anything so new as those clear and vivid masses, with their sharp blue shadows," she wrote in her 1848 memoir, Eastern Life, Present and Past. The moment never left her. "I cannot think of it without emotion," she wrote. 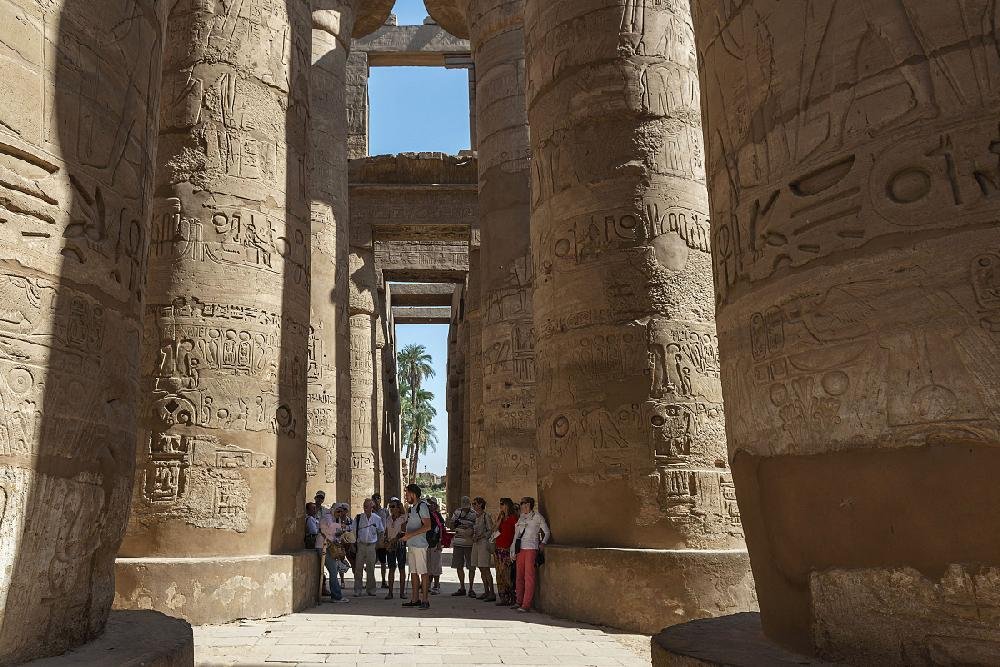 The temple complex of Karnak in Luxor, Egypt, on Sept. 29, 2019. In the late 1800s, women explorers sailed the Nile, sending back vivid accounts of Egypt‚Äôs riches and a 21st-century writer travels in their wake.(Maria Mavropoulou/The New York Times)

Their lyricism was tempered by adventure: In A Thousand Miles Up the Nile, Amelia Edwards, one of the century's most accomplished journalists, described a startling discovery near Abu Simbel: After a friend noticed an odd cleft in the ground, she and her fellow travelers conscripted their crew to help tunnel into the sand. "Heedless of possible sunstroke, unconscious of fatigue," she wrote, the party toiled "as for bare life." With the help of more than 100 laborers, supplied by the local sheikh, they eventually descended into a chapel ornamented with dazzling friezes and bas-reliefs.

Though some later took the Victorians to task for exoticizing the East, these travelers were a daring lot: They faced down heat, dust, floods and (occasionally) mutinous crews to commune with Egypt's past. Liberated from domestic life, they could go to ground as men did.

Wolfradine Von Minutoli wrote of camping out under the stars by the pyramids. Florence Nightingale, then 29 and struggling to gain independence from her parents, recalled crawling into tombs illuminated by smoking torches. Nightingale, among others, was struck by the otherworldliness of it all. Moved by the fragmented splendor of Karnak, the sacred complex in Luxor, she wrote to her family, "You feel like spirits revisiting your former world, strange and fallen to ruins."

Taken with their sense of adventure, I wanted to know whether the Nile journey had retained its mystique. Would I feel the presence of these women along the way? And could modern Egypt rival the country that they encountered? 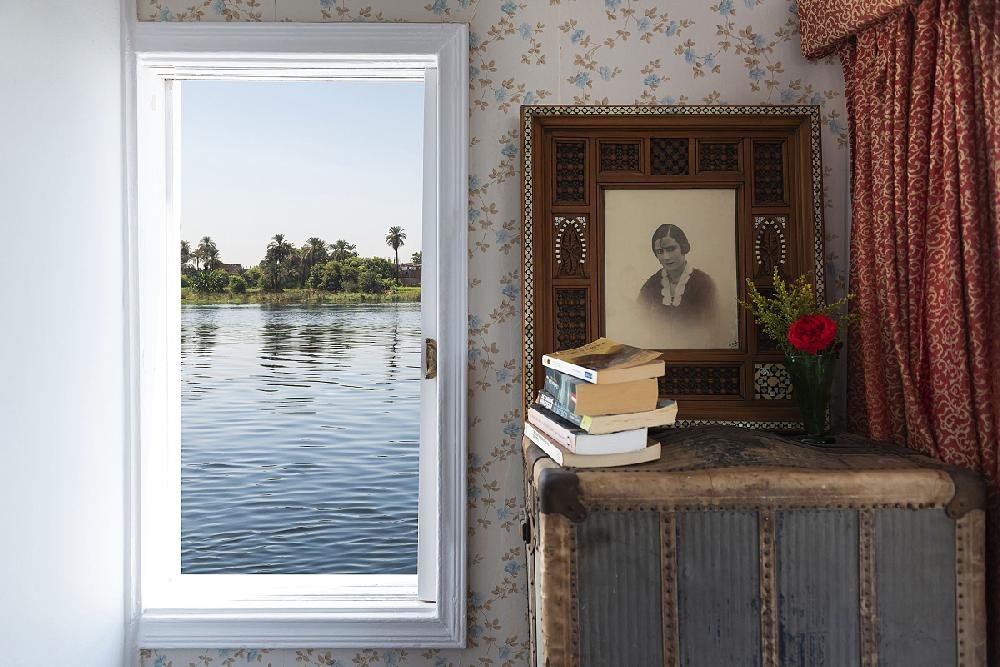 The Nile flows just beyond a bedroom window in the Egyptian vessel, the Orient, in Egypt on Sept. 24, 2019. In the late 1800s, women explorers sailed the Nile, sending back vivid accounts of Egypt‚Äôs riches and a 21st-century writer travels in their wake. (Maria Mavropoulou/The New York Times)

Dozens of double-masted dahabiyas and river cruisers now ply the Nile, but I was drawn to the low-key Orient — a charming wooden sailboat, it has a capacity of 10 people but I was joined by only four. Instead of a cinema and floor shows, we had backgammon and intermittent Wi-Fi. (The cost of the three-day cruise, including my single supplement, was $964.) On the upper deck, I could lounge on oversize cushions and watch storks skim the river. In the salon, a low sofa and carved armchairs were perfect for dipping into vintage National Geographic.

My cabin was compact, with twin brass beds and floral wallpaper. The river was close; I could have pulled aside the screens and trailed my fingers through the current. (Not that I did; early travelers praised the "sweetness" of Nile water, but trash bobs on its shores and bilharzia, a parasitic disease that attacks the kidneys, liver and digestive system, is a risk.)

Before 1870, when entrepreneur Thomas Cook introduced steamers (and declasse package tours), a cruise on the world's longest river was a marathon. Journeys lasted two or three months and typically extended from Cairo to Nubia and back.

Just getting on the river was a trial: After renting a vessel, travelers were obliged to have it submerged to kill vermin. The boats were then painted, decorated and stocked with enough goods to see a pharaoh through eternity.

Published in 1847, the Hand-book for Travellers in Egypt advised passengers to bring iron bedsteads, carpets, rat-traps, washing tubs, guns and staples such as tea and "English cheese." Pianos were popular additions; so were chickens, turkeys, sheep and mules. M.L.M. Carey, a correspondent in Women Travelers on the Nile, recommended packing "a few common dresses for the river," along with veils, gloves and umbrellas to guard against the sun. 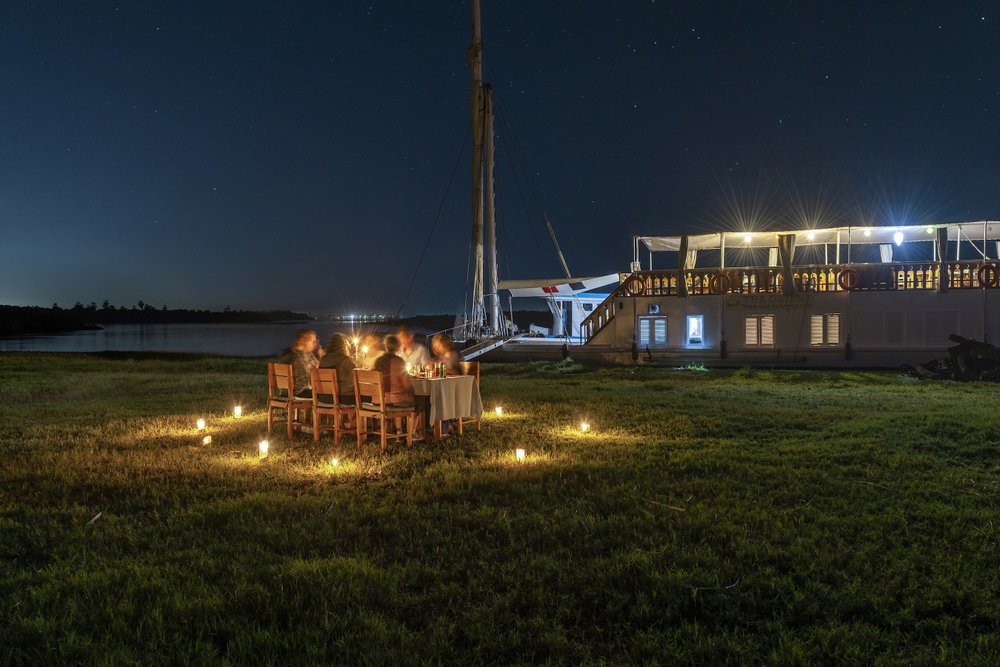 Travelers on the Egyptian vessel The Orient enjoy a dinner al fresco on the banks of the Nile on the second night of their river cruise. (The New York Times/Maria Mavropoulou)

With my fellow passengers, I spent the first afternoon at a temple near the town of Kom Ombo. The structure rose in the Ptolemaic period and was in ruins for millenniums. Mamdouh Yousif, our guide, talked us through it all. A native of Luxor, he used a laser pointer to pick out significant details and served up far more history than I could absorb.

Celebrated for its majestic setting above a river bend, the temple was nearly empty. Reggae music drifted from a cafe and shrieks rose from a neighborhood playground.

Dedicated to Horus, the falcon god, and Sobek, the crocodile god, Kom Ombo has a separate entrance, court and sanctuary for each deity. Inside are two hypostyle halls, in which massive columns support the roof. Each hall was paved with stunning reliefs: Here was a Ptolemaic king receiving a sword; there, a second being crowned. A mutable figure who was both aggressor and protector, Sobek was worshipped, in part, to appease the crocodiles that swarmed the Nile. Next to the temple, 40 mummified specimens — from hulking monsters to teacup versions — are enshrined in a dim museum, along with their croc-shaped coffins.

Defaced by early Coptic Christians, damaged by earthquakes and even mined for building materials, Kom Ombo was in disrepair until 1893, when it was cleared by French archaeologist Jean-Jacques de Morgan. Now, it's inundated in the late afternoon, when cruise-boat crowds arrive. As we were leaving, folks in shorts and sunhats just kept coming, fanning out until the complex became a multilingual hive.

In the morning, we headed north to the sandstone quarry and cult center of Gebel Silsila. With their rock faces still scored with tool marks, the cliffs have an odd immediacy — as if armies of stonecutters could reappear at any moment.

The compelling part of the site is a hive of rock-cut chapels and shrines. Dedicated to Nile gods and commissioned by wealthy citizens, they are set above a shore lined with bulrushes. Eroded but evocative, some retain images of patrons and traces of paintings. 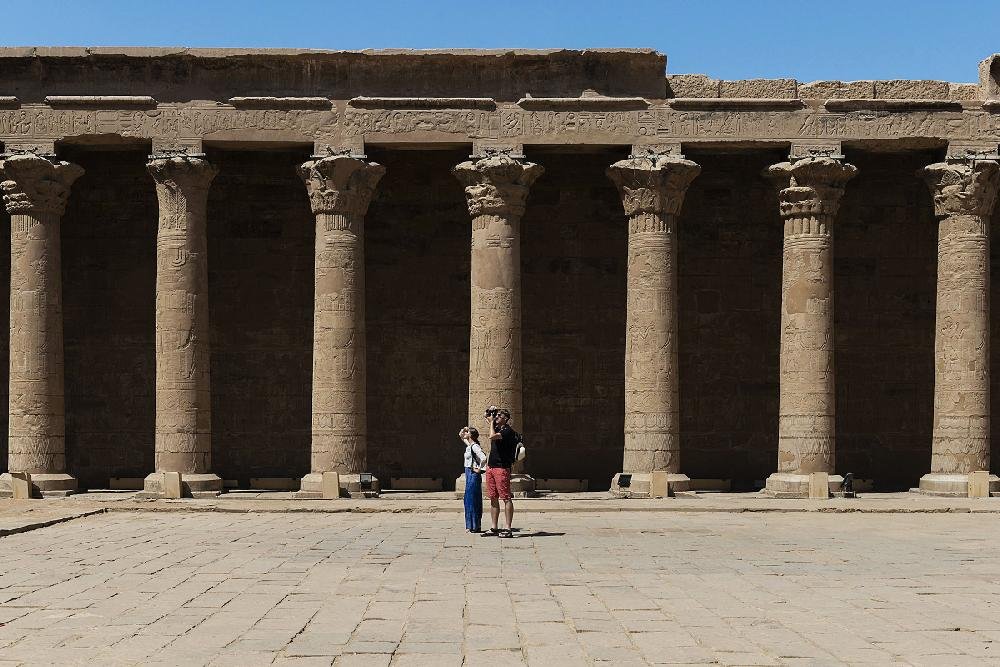 The Temple of Edfu, one of Egypt‚Äôs best-preserved temples, was on the itineraries of some 19th-century travelers, in Egypt, on Sept. 27, 2019. In the late 1800s, women explorers sailed the Nile, sending back vivid accounts of Egypt‚Äôs riches and a 21st-century writer travels in their wake. (Maria Mavropoulou/The New York Times)

IN EDFU, AN ODE TO POWER IN STONE

After lunch, we traveled downriver to Edfu, to Egypt's best-preserved temple. Tourism has made its mark in the agricultural town: Cruise boats line the quay, and the drivers of the horse-drawn carriages known as caleches stampede all comers. Begun in 237 B.C. and dedicated to Horus, the temple was partially obscured by silt when Harriet Martineau visited in 1846. "Mud hovels are stuck all over the roofs," she wrote, and "the temple chambers can be reached only by going down a hole like the entrance to a coal-cellar, and crawling about like crocodiles." She could see sculptures in the inner chambers, but "having to carry lights, under the penalty of one's own extinction in the noisome air and darkness much complicate the difficulty," she wrote.

Excavated in 1859 by French Egyptologist Auguste Mariette, the temple is an ode to power: A 118-foot pylon leads to a courtyard where worshippers once heaped offerings, and a statue of Horus guards hypostyle halls whose yellow sandstone columns look richly gilded.

Feeling infinitesimal, I focused on details: a carving of a royal bee, an image of the goddess Hathor, a painting of the sky goddess Nut.

Yousif kept us moving through the shadowy chambers — highlighting one enclosure where priests' robes were kept and another that housed sacred texts. Later, I thought of something Martineau had written: "Egypt is not the country to go to for the recreation of travel," she said. "One's powers of observation sink under the perpetual exercise of thought." Even a casual voyager, she wrote, "comes back an antique, a citizen of the world of six thousand years ago."