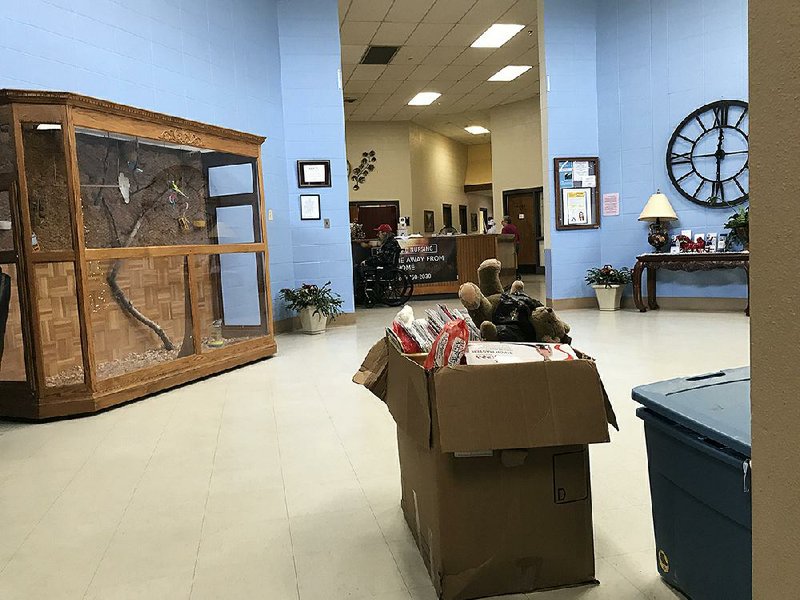 A lawsuit filed by a nursing home owner will test the state's power to veto would-be operators, just as state regulators try to toughen elder-care rules in response to a series of crises.

Companies managed by Christopher Brogdon of Atlanta contend that the Arkansas Department of Human Services unfairly denied their bids to take over nursing homes in Hope and Horseshoe Bend.

The denial prompted the hasty removal of more than 60 residents from the properties early this month.

New leadership within the Human Services Department has pledged stronger oversight of current and prospective nursing home operators -- an endeavor announced this fall when the state seized cash-poor nursing homes for the second time in as many years.

"Make no mistake, we will deny" applications for new operators who don't prove that they will provide a safe environment, Jerald Sharum, the chief state official over provider quality, told Brogdon during an October meeting in Little Rock.

Notes from that meeting and other documents obtained through the Arkansas Freedom of Information Act shed more light on the back-and-forth with Brogdon and what factors the state considered leading up to the Nov. 4 denial.

Brogdon's management company bankrolled the Hope and Horseshoe Bend homes on an interim basis, expecting affiliated companies to receive the licenses and that expenses would be reimbursed. He sank $700,000 into the nursing homes and has not been able to bill for reimbursement, Cheryl Nichols, a Brogdon associate, said in a phone interview.

When his company pulled out in early December, the existing licensed operator, Cathy Parsons of Greenbrier, informed the nursing home staff that she did not have the cash to resume running the properties.

Administrators decided to evacuate the homes before food and medical supplies ran out, while state officials determined that a state takeover was "not appropriate."

The lawsuit filed by Brogdon's companies says the state "provided no meaningful explanation of its rationale" in rejecting the applications and that the denial was "based on an unsupported and unknown finding that was arbitrary and capricious."

The state's denial letter told Brogdon that he failed to prove that 11 nursing homes linked to him in Alabama, Arkansas and Oklahoma complied with state and federal standards for the previous one-year period -- one of four reasons for which state law allows a denial.

Those reasons, listed in Arkansas Code 20-10-224, have been in place for at least 30 years, legislative records show. Human Services Department spokeswoman Marci Manley said she believes this rejection was the first time the state shot down a nursing home ownership change under the law.

The state has not taken any steps to revoke Brogdon-affiliated companies' licenses to run the Hazen and Lonoke homes, Manley has said. The process for rejecting a would-be operator is different from sanctioning an existing licensee.

Brogdon was among the subjects of an Arkansas Democrat-Gazette investigative article in April on shortcomings in the state's vetting of incoming operators.

The article found that officials were unaware of a 2015 federal civil fraud judgment of $83.1 million against Brogdon when they allowed him to acquire the Hazen and Lonoke licenses in 2018.

Brogdon was found liable for misleading bond investors -- using their money to prop up facilities outside the scope of borrowing and to fund a lavish lifestyle, the U.S. Securities and Exchange Commission alleged.

A Human Services Department spokeswoman, who called the finding "concerning," said at the time that the state likely wouldn't have been able to turn him away, even if it had known of the securities case, because state law allows rejections of operator applications only for specific reasons.

Nichols, who is Brogdon's operations director, referred to the article in an email to department leaders asking for the October meeting. Nichols wrote that she did not want to be judged based on "partial & incorrect information" about Brogdon, whom she called the "Owner/Investor."

She did not provide specific concerns about the April article's accuracy during a recent phone interview.

"What people don't realize is Chris Brogdon does not operate facilities," Nichols said. "People like me operate them on his behalf. ... I'm very much a stickler for resident care. I protect my own license, and I protect my own moral code."

Paperwork that the companies filed to take over the Arkansas properties listed Brogdon as their manager. The "Brogdon Grandchildren's Trust" wholly owns each of the companies, according to the documents.

Brogdon did not respond to a cellphone message seeking comment.

Brogdon's applications to take over the Hope and Horseshoe Bend homes was the latest management change for properties that have had three different operators in fewer than three years.

Separately, Parsons was listed as a minority business partner to Keith Head in five other nursing homes that the state took over this fall amid a cash crunch that left staff members without paychecks and vendors threatening to stop supply runs.

In late September, the state's Office of Long Term Care received change-of-ownership applications on the same day for the Hope and Horseshoe Bend facilities. The filings were signed by Parsons, as the seller, and Brogdon.

License transfers are private transactions between the existing operator and the applicant, but the state has the power to veto such transfers in some circumstances.

Both seller and buyer "deserve[d] attention," state long-term care program manager Kenneth Hanft wrote in an email during a review of Brogdon's applications, saying state monitors should keep an eye out for cash flow issues at the sites.

Sharum wrote in an email that he was "concerned" about the fraud judgment against Brogdon that was raised in the April Democrat-Gazette article and asked Office of Long Term Care director Cecilia Vinson if there was documentation related to that report.

He told the long-term care office in the same Oct. 2 email to "not proceed" on the two applications until the state compiled and reviewed a list of nursing homes tied to Brogdon here and elsewhere. He also wrote that he would review state laws governing grounds to deny a license.

Over the following days, state officials amassed data on Brogdon-associated homes in Arkansas, Alabama and Oklahoma, including what they understood to be his ownership interest at each site and "star ratings" assessed by the federal Centers for Medicare and Medicaid Services.

According to an internal document, five of 11 homes they identified had one-star overall ratings from the federal agency -- its lowest rating, indicating "much below average" performance.

The homes had been fined a total of about $79,000 by the Centers for Medicare and Medicaid Services, and were cited for 303 deficiencies in three years, according to the state's research. Brogdon groups have operated eight of the 11 homes for at least three years.

Because the star-rating system relies on three years of data, it's not always an accurate reflection of present-day quality, Nichols said when told of the research.

"Any reference that says that we have not been able to prove that we legitimately operate safe buildings is -- they can't prove that crap for anything," Nichols said.

Asked about one- and two-star overall ratings at properties Brogdon acquired in 2014, Nichols said "you're also dealing with humans," referring to administrative staffs.

On Oct. 7, Nichols wrote to regulators, asking if the change-of-ownership process for the two facilities could be expedited, so the Brogdon-related ownership group could begin receiving Medicaid reimbursements. The Hope and Horseshoe Bend homes were heavily in debt when the group assumed operations, she said.

"We are also very interested in picking up several of the homes that were recently taken over by the State," she wrote, a reference to the five homes that had been licensed to Head and Parsons.

Brogdon, Nichols and an associate met with state regulators in Little Rock on Oct. 18 to discuss the applications. During that conversation, Nichols reiterated her request to speed up the approval process so the group could recoup money it spent running the homes.

Human Services Department officials told the group that it would need to supply documentation of its actions addressing compliance issues, including "statements of deficiency" from the Centers for Medicare and Medicaid Services, for all of its nursing homes.

Nichols saved those documents to a flash drive but had not remembered to take it to the meeting, she said, according to meeting notes.

Just over two weeks later, regulators sent formal notice that the change-of-ownership applications had been rejected.

The state requested inspection findings, plans of correction and star ratings, said Nichols, who contends that officials didn't have legal authority to demand that information and could have independently obtained it. Nichols, "out of courtesy," saved the records to a flash drive and mailed it before Nov. 4, she said.

Nearly a month later, on Dec. 2, administrators at the Horseshoe Bend property learned that Brogdon's management company, Marsh Pointe Management LLC, would pull its financial and operational support, triggering emergency procedures at the site to find other accommodations for the residents.

"They cancelled the order for ... foods that was placed for the 1st of the month as of yesterday, payroll is not being covered by Marsh Pointe and payday is [Dec. 9]," Amy Smith, the property's director of nursing, wrote to the state's long-term care ombudsman on Dec. 3.

"We will be out of milk and bread as of tomorrow. ... We are not telling staff at this point to prevent chaos."

Marsh Pointe covered the Dec. 9 payroll and continues to pay two employees, including a maintenance worker, at each of the facilities, said Nichols, who called Smith's email "incorrect."

State law allows a rejected operator to file a circuit court appeal within 30 days of a denial. Brogdon filed the appeal in Pulaski County on Dec. 4, the 30th day.

The appeal asks McGowan to reverse the denial. It alternatively asks the judge to send the application back to the state agency with directions to justify the decision and give the companies a chance to fix any shortcomings.

Brogdon's companies plan to reopen the Hope and Horseshoe Bend nursing homes if the lawsuit succeeds, Nichols said. Brogdon also wants to acquire a third license -- one of the five that the department seized this fall, Nichols said. 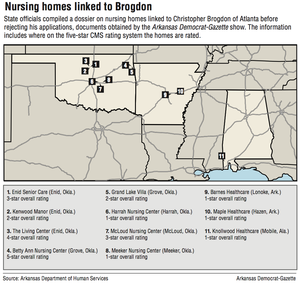