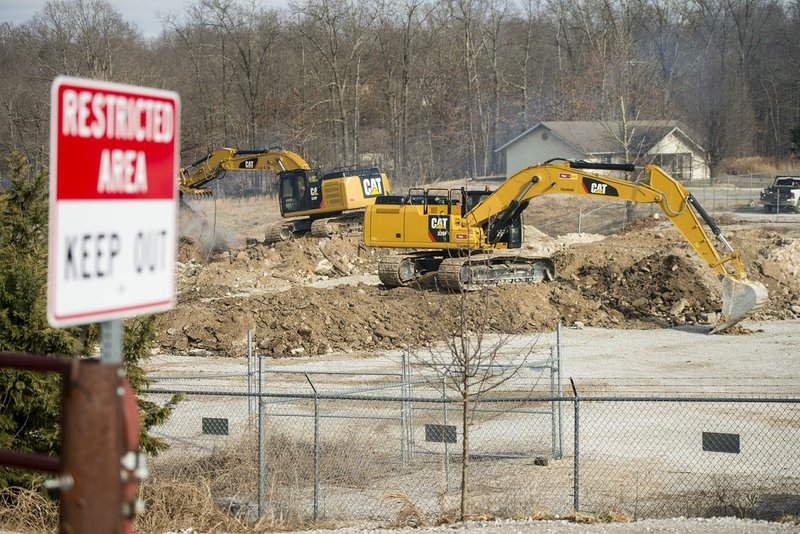 BELLA VISTA -- Work at a site on Trafalgar Road where an underground fire has burned since late summer is helping to contain the fire and limit any possible environmental damage, officials said.

Environmental Works Inc. dug a trench Jan. 21-25 along the south perimeter of the site ranging from 22 feet to 48 feet deep. The trench was used to assess the waste and determine the location of the fire. The trench stopped the fire from spreading to adjacent properties, according to an Arkansas Department of Environmental Quality news release.

"By stopping the fire from spreading, an estimated 25,000 to 50,000 cubic yards of debris will not have to be quenched, excavated, or disposed, saving the state an estimated $3.5 to $7.5 million," Donnally Davis with the department said in an email. "During excavation, fire was not observed in the trench; however, smoke was identified 28 feet below the surface."

Smoke is an indication of voids within the layers of waste, Davis said.

Firefighters were dispatched to the area July 29, where they spotted smoke and what appeared to be the remains of a brush fire, Bella Vista Fire Chief Steve Sims said. Fire Department personnel have said the fire may be burning more than 50 or 60 feet underground.

Tom Judson, the Bella Vista Property Owners Association's chief operating officer, said the association operated the dump on leased land from December 2003 to 2016 when the dump was covered with soil.

Nobody monitored the site the past few years it was open, but staff members would remove trash when possible, Judson said. The operation was closed Dec. 31, 2016, according to Bella Vista's website. The property is owned by Brown's Tree Care.

Gov. Asa Hutchinson pledged close to $1 million Dec. 28 to start the process of suffocating the fire. The cost to clean up the site and extinguish the fire could be between $21 million and $39 million, well beyond original estimates of $5 million to $10 million, he said.

Womack of Rogers sent a letter to the Environmental Protection Agency and Federal Emergency Management Agency asking what resources might be available, according to a news release.

"The costs associated with addressing this incident are much higher than what was anticipated," a portion of Womack's letter reads. "If it is at all possible to utilize federal resources to help the state of Arkansas expedite the implementation of a solution that extinguishes the fire and remediated the site, I encourage your agency to engage with state officials on how those resources can be utilized. I want to ensure the state of Arkansas has access to any and all resources -- funding, experts, logistics -- that might be available to them through the federal government."

The Arkansas Forestry Commission began cutting a 15-foot fire break around the site perimeter last week, Davis said. Commission workers will do back burning to clear brush and other debris to prevent the fire from spreading, Davis said.

Other work includes building access roads and a temporary weir to collect water. The water will be used for firefighting on the surface of the site, according to the news release.

The prep work will cost between $1 million and $1.3 million, according to the environmental agency. The work will be done by EnSafe, the state Department of Environmental Quality, the Forestry Commission and local officials. EnSafe is the Memphis-based company hired by the state to help put out the fire.

Terry Martin, a resident who lives about a half-mile from the fire site, said he's concerned how any water runoff might affect Lake Ann, a place where he fishes. He's also troubled about what is burning underground.

"You don't know what is down there," he said.

There were three readings of "moderate."

There was a reading of 69 at the fire station on Jan. 23 and readings of 55 and 51 at the pump station Jan. 23-24, according to the Arkansas Department of Health.

A "moderate" air quality reading is considered acceptable; however, for some pollutants there may be a moderate health concern for a very small number of people, according to the Health Department.

The air quality index will continue to fluctuate in Bella Vista, said Meg Mirivel with the Health Department.

"With a situation like this one, we expect some variability in air quality," she said. "Conditions in the area surrounding the Trafalgar Road fire will continue to change depending on weather, wind direction and activity at the site. Continued monitoring will help us get a better picture of particulate levels in the air."

The weather and wind direction play the biggest role with the smoke, Martin said.

"You can smell it when the wind blows from the south or east," he said.

Smoke from the fire could be smelled Wednesday near the intersection of Bella Vista Way and West McNelley Road, well south of the site. Temperatures were in the low 20s with little wind and clear blue skies.

EPA did air monitoring at the former stump dump site Oct. 2 and 3, Nov. 9 and 10, and Dec. 10-13, Davis said. The agency collected 24-hour air samples from five locations around the site, she said.

Particulate matter monitoring measures the amount of solid and liquid droplets found in the air such as ash, dust and smoke. The findings provide a snapshot of air quality and how it might affect health, according to the Health Department.

Preliminary results of monitoring near the fire showed air quality in the "unhealthy" category, according to a Dec. 12 Health Department news release. Everyone within a half-mile radius of the 8000 block of Trafalgar Road was cautioned to avoid prolonged or heavy exertion outdoors.

"With previous air quality monitoring conducted by the EPA showing elevated benzene levels on-site and the anecdotal information from residents who are showing negative health effects from inhaling air in the vicinity of the stump dump, it is clear to me that this incident needs to be remediated as quickly as possible," Womack's letter read.