Taggart finally has enough of QB 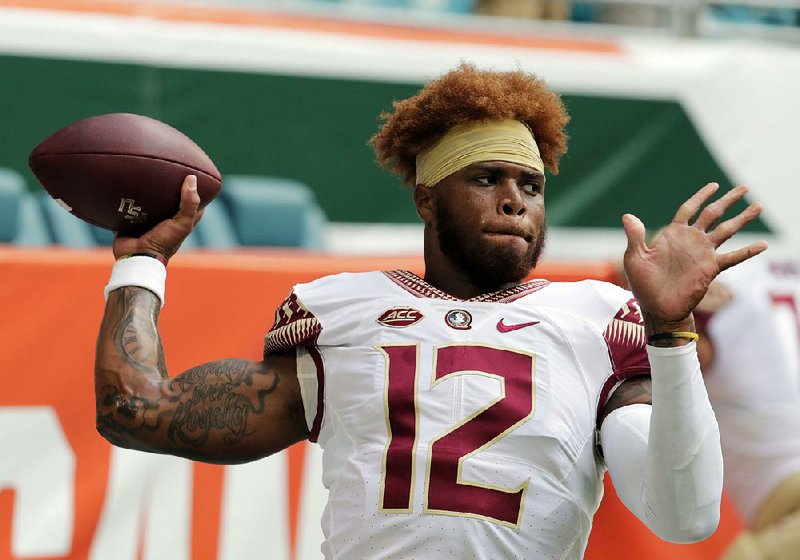 Francois, who was released from the team Sunday after an apparent domestic dispute with his girlfriend surfaced on social media Saturday night, is a case study on the perils of a coach giving a serial knucklehead too many chances.

"As we build a new culture and foundation for FSU football, we have high expectations for all of our student-athletes and we will not shy away from those high standards of conduct," Taggart said in a statement Sunday morning announcing his decision to boot Francois.

Come on, Taggart already knew when he took over as FSU's coach before last season that Francois did not in any way meet the criteria for building a new culture of high standards and exemplary conduct.

In fact, everybody and anybody close to the program knew. Just consider a telling Twitter dispatch Sunday by Senior Bowl Executive Director Jim Nagy, who scouted Francois extensively recently before Francois decided to return to FSU for his senior season.

"The breaking news that Florida State has dismissed QB Deondre Francois is not shocking to anyone that spent any amount of time around the program the past few years," Nagy tweeted. "Domestic assault charges aside, I cannot recall scouting a QB with more football character red flags than Francois."

News flash: Taggart -- like many college football coaches -- was willing to overlook obvious character flaws because Francois was the most talented quarterback on his roster.

After all, shortly after Taggart became head coach, Francois had already been involved in domestic violence incident in January of last year. The quarterback himself called 9-1-1 during a domestic dispute in which he claimed his girlfriend was trashing his apartment and wouldn't leave. She told a different story and accused him of domestic violence, but said she didn't want to file charges. She also told police Francois had been "smoking weed."

The Tallahassee Police Department, in fact, suspected him not just of smoking weed but of selling it. In April of last year -- again, after Taggart had already taken over as head coach -- TPD conducted a raid on his apartment, operating on a tip that Francois was dealing drugs.

At the time, the Orlando Sentinel reported that Tallahassee police received information from an informant who saw a grocery bag full of marijuana at Francois' apartment -- an amount police estimated at about two pounds. The police began investigating and collected Francois' garbage four times between the end of February and the beginning of April.

Based on what they found in the garbage, they obtained a search warrant and conducted a raid of his apartment. TPD said the garbage from Francois' apartment contained plastic bags with marijuana residue, innards of blunt cigars, a grinder, an instant drug test cup and three vials of pain medication.

But because police found only a small amount of pot in Francois' apartment, he was not arrested and was given the chance to enter a pre-trial diversion program and pay a fine.

Taggart could have easily cut ties with Francois then, but he chose to give him another chance because, well, he probably envisioned Francois turning into the fabulous young quarterback he'd been during his redshirt freshman season under former coach Jimbo Fisher. Francois then tore the patellar tendon in the season opener of his sophomore year against Alabama, and missed the remainder of the 2017 season.

While injured, Francois was inexplicably absent for a game late in the season when the Seminoles celebrated Senior Day. The information became public only because Francois was back home in Orlando posting on social media while his teammates were trying to become bowl eligible. When Fisher was asked about it after the game, he vaguely and tersely said injured players can miss games at their own "discretion."

In other words, Jimbo was covering for Francois, just as a lot of authority figures have likely given Francois the benefit of the doubt throughout his football career.

Francois finally ran out of chances at Florida State over the weekend.

The question is, what took so long?