Restraints on payday lenders set to be lifted 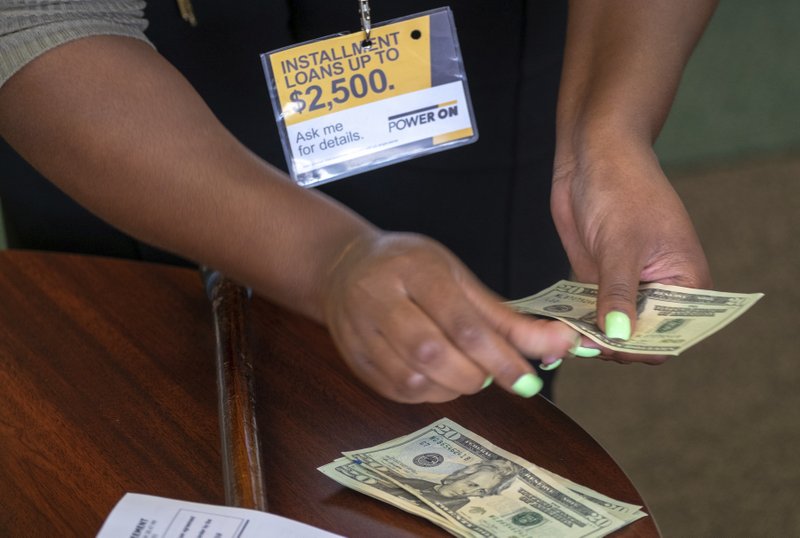 In this Aug. 9, 2018, photo a manager of a financial services store in Ballwin, Mo., counts cash being paid to a client as part of a loan. The nation's federal financial watchdog has announced its plans to roll back most of its consumer protections governing the payday lending industry. (AP Photo/Sid Hastings, File)

NEW YORK -- The nation's federal financial watchdog said Wednesday that it plans to abolish most of its regulations governing payday lenders.

The move is viewed as a win for the payday lending industry, which argued the government's regulations could kill off a large chunk of its business. But consumer groups say payday lenders exploit the poor and disadvantaged with loans that have annual interest rates as high as 400 percent.

The cornerstone of the regulations was a requirement that lenders make sure borrowers could afford to repay payday loans without being stuck in a cycle of debt, a standard known as "ability to repay." This standard, set to take effect in August, would be eliminated under the new rules. Another part of the rules, which would have limited the number of payday loans a person could roll over, was also eliminated.

Critics of the payday lending industry have argued that without these underwriting standards, the Consumer Financial Protection Bureau's new regulations are effectively toothless. The main criticism of the payday lending industry was that many borrowers would take months to repay a loan that was originally designed only to last a couple of weeks, renewing the loan over and over again.

"This proposal is not a tweak to the existing rule ... it's a complete dismantling of the consumer protections [the bureau] finalized in 2017," said Alex Horowitz, a researcher with Pew Charitable Trusts, a think tank whose research on the industry was relied on heavily by the bureau when the original rules were unveiled a year and a half ago.

Payday loans are allowed in California and 32 other states, with the rest prohibiting them. An estimated 12 million Americans take out payday loans each year from websites and about 16,000 storefront locations.

The overhaul of the payday lending rule is "disturbing, but not surprising," said Linda Jun, senior policy counsel at Americans for Financial Reform, a consumer advocacy group. The "industry thrives on being able to do whatever it wants. That is their business model, to have zero standards."

The announcement was the first abolition of regulations under the Consumer Financial Protection Bureau's new director, Kathy Kraninger, who took over the bureau late last year. Mick Mulvaney, who was appointed by President Donald Trump as acting director of the bureau in late 2017, announced a year ago that the bureau was intending to revisit the rules. As a congressman from South Carolina, Mulvaney received tens of thousands of dollars in political donations from the payday lending industry, raising concerns he was too connected to the industry to appropriately regulate it.

The Community Financial Services Association of America, a payday lending group, is holding its annual conference in March at Trump's Doral golf club in Miami. It held its conference there last year, too. Government watchdog groups have criticized the use of Trump hotels and resorts by businesses and lobbying groups as a way to influence regulation and policy by giving money to the president.

A spokesman for the Community Financial Services Association of America did not immediately respond to a request for comment.

Under the Barack Obama administration, the consumer protection bureau spent close to five years working on a process to nationalize the regulation of the payday lending industry, which is mostly regulated at the state level. Arkansas law caps the annual interest rate on loans to 17 percent for all lenders except banks based out of state.

The bureau started the process to streamline regulation in 2012, and its finalized rules were finished in late 2017. It was among the last major pieces of regulation completed under Richard Cordray, the bureau's first permanent director, before he left the bureau.

"I think this is a bad development for consumers," Cordray said Wednesday. "We looked carefully at this industry and there was a common problem of borrowers getting trapped in long-term debt. We had put together what I considered to be a modest proposal. The change is really disappointing and hasty."

Wednesday's announcement is one of the most significant steps the Trump administration has taken yet to remake the bureau. Republicans and business leaders complained for years that the bureau was too aggressive and often pushed legal boundaries to go after financial companies.

Under the Trump administration, the bureau has softened its approach. It has dropped several lawsuits against payday lenders and stripped enforcement powers from its fair lending office. Rather than pursuing eye-popping penalties, the bureau must balance the needs of consumers and the financial companies it regulates, agency leaders say.

The bureau did propose keeping one part of the payday lending regulations: a ban on the industry from making multiple debits on a borrower's bank account, which consumer advocates argued caused borrowers hardship through overdraft fees. In a statement, the Community Financial Services Association of America said it felt the bureau's repeal did not go far enough and that it would have wanted the regulations over debits eliminated as well.

The proposed new rules are subject to a 90-day comment period by the public. The proposed changes are likely to face legal challenges because the bureau is taking a radical departure from its previous position, which is not something federal regulators are typically allowed to do under law.

Information for this article was contributed by Ken Sweet and Bernard Condon of The Associated Press; Renae Merle of The Washington Post; and Jim Puzzanghera of the Los Angeles Times.

Print Headline: Restraints on payday lenders set to be lifted