GIRLS BASKETBALL: Rogers' 3-pointers too much for West 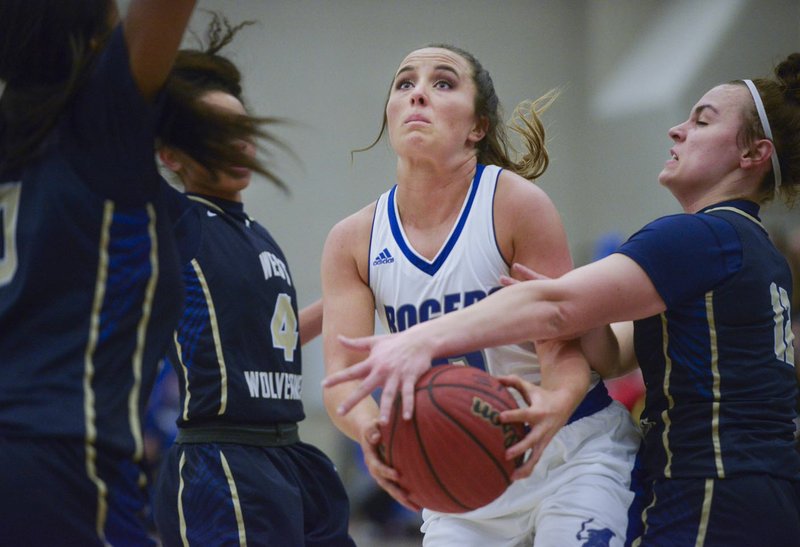 ROGERS -- The 3-point shot was open and available, and Rogers High's girls took full advantage of it Friday night.

The Lady Mounties connected on a dozen shots from beyond the arc -- six of them by senior guard Courtney Storey -- and that became the main offensive weapon as Rogers claimed a 53-37 victory over Bentonville West during 6A-West Conference basketball action in King Arena.

"We knew it was going to be a critical element in this game," Rogers coach Preston Early said. "We knew they had become a zone team over the last three or four games. One of the things we worked on is the spacing and ball movement.

"I give a lot of credit to our players for the way they moved the ball to open shooters. We tell them all the time ball energy creates open shots. We were relaxed and confident, and those things go hand-in-hand."

Storey found the open spot early and quickly hit a trio of 3-pointers in the first 4 minutes, then Kate McConnell hit her first to help Rogers (14-8, 6-4) grab a 13-5 lead with a minute left in the first quarter. Storey then hit one more in each quarter, with her sixth coming with 6:16 remaining.

That put Storey within one of the school record McConnell set earlier in the season, but she never had the chance to go for the tie. Early told his team to settle for layups as Rogers owned a 51-37 lead, and Storey did hit a short jumper to give her a game-high 21 points.

"We practiced a lot against the 1-2-2 this week, and our JV helped us work for the open shot," Storey said. "Then my team found me. It would have been nice to tie that record with Kate McConnell, but I'm OK with it. We were doing good."

The Lady Bulldogs turned up the defensive effort in the second half and secured a road win against crosstown rival Har-Ber.

Springdale senior and Arkansas signee Marquesha Davis had a game-high 24 points, and junior guard Thaly Sysavanh, who has battled the flu the past two weeks, had 12.

Har-Ber freshman Caylan Koons had 22 for the Lady Wildcats, scoring 17 in the first half. Chloe Joyner scored 11 including three 3-pointers.

Springdale exploded for 22 points in the first quarter, knocking down five 3-pointers including two each from Davis and Sysavanh.

The Lady Pointers kept their composure as they walked off the court Friday night but erupted into a celebratory roar once the locker room door closed behind them.

It had been nearly 12 years since a Van Buren girls basketball team had defeated Fayetteville. But after senior Kayleigh Evans tacked on the final points with a layup at the buzzer, Van Buren came away with a stunning 59-53 win over the Lady Bulldogs (16-3, 9-1). It was Fayetteville's first loss in the 6A West Conference this season.

"It, feels great, amazing," said Evans, who has been on the losing end all three years she has played for the Lady Pointers. "I'm just so happy for my teammates. We just stuck together the entire game and kept fighting.

"We've been trying to beat Fayetteville since forever, so maybe we just wanted it more tonight."

"Anytime you get a conference win at home is great," Van Buren coach Chris Bryant said. "But to beat a storied team and program as Fayetteville has been is pretty special, especially for our kids and the kids that came before them in our program.

"We've had some really good teams in the past that didn't have this opportunity."

Van Buren jumped out to a 6-0 lead on a pair of 3-pointers from Lexi Miller and Rylee Ryan, only to see Fayetteville storm right back with a pair of 3s from Sasha Goforth and Claudia Bridges. A putback by Coriah Beck then game the Lady Bulldogs an 8-6 lead with 5:16 left in the first quarter

Sophomore Brooklyn Kannady drilled a three to knot the score at 44-44 with 5:03 to play. Kannady hit four 3-pointers in the game to finish with 13 points.

Junior point guard Lexi Miller hit 4 of 4 free throws in the final 1:19 to put the game away. Miller finished with a game-high 21.

Bentonville had three players score in double-digits on its way to win No. 20 after the team beat Rogers Heritage on Friday night.

Avery Hughes led the Lady Tigers (20-3, 9-1) with 13 points. Maryam Dauda followed with 12, and Emily Sanders had 11. Hughes also led the team with five assists, and Dauda corralled in a game-high seven rebounds. Bentonville had 10 players score during the game, which pleased coach Tom Halbmaier.

"It's nice to have that balance," Halbmaier said. "We just had good balance throughout our whole lineup tonight, and the shots, they were aggressive and good-looking shots. I thought our kids played a complete game tonight."

The Lady Tigers had some support from their bench as Kadie Kultgen scored eight points and provided some tenacity for Bentonville. The sophomore forced three jump balls in the second quarter alone as the team attacked Heritage on sides of the court all night.

Maddie Lynge and Danielle Dickerson each had six points to lead the Lady War Eagles (5-16, 1-9). Heritage kept attacking the paint on offense, looking for a kick out to their shooters behind the three-point line, but Bentonville was able to collapse the middle and force Heritage to take some rushed shots inside the arc. 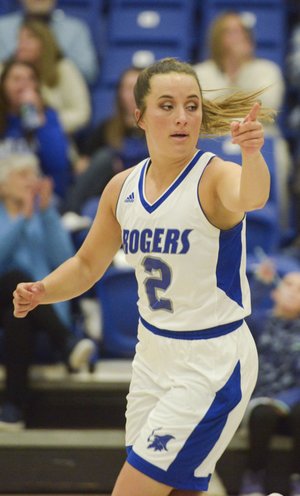 Print Headline: GIRLS BASKETBALL: Rogers' 3-pointers too much for West