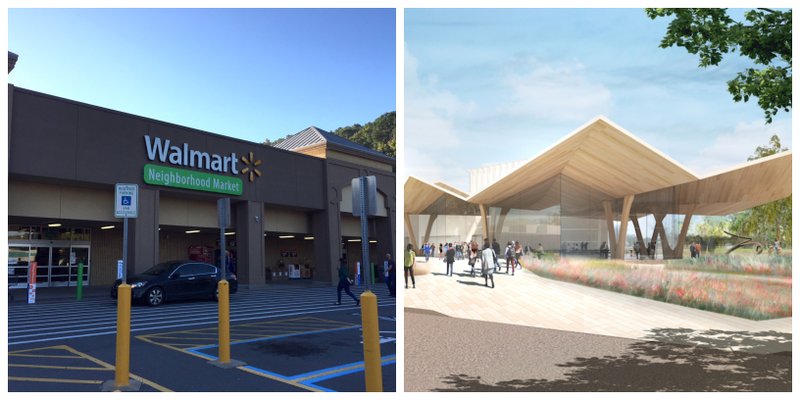 On the left, the Wal-Mart Neighborhood Market at 2510 Cantrell Road in Little Rock's Riverdale neighborhood closed in late 2017. On the right, this rendering released Tuesday, Feb. 27, 2018, shows the planned renovations to the Arkansas Arts Center in Little Rock.

Arkansas Arts Center staff, arts classes and rehearsal for children’s theater will move to Riverdale for the more than two years it will take to complete a $98.8 million overhaul of its downtown Little Rock facility, officials announced Monday.

The Arts Center will move to 2510 Cantrell Road, the site of the Walmart Neighborhood Market that closed in late 2017, center officials said.

The location will open in September, a month before groundbreaking on the museum makeover is scheduled to begin. Officials have said they expect reopening the museum in early 2022.

“The [Arts Center] is more than any one space or one building,” Laine Harber, the museum’s interim executive director, said in a statement. Our programs will continue to span across communities and extend across the state over the next two and a half years.”

Arts Center officials in November announced a deal with the Central Arkansas Library System to display about 150 pieces of artwork from its crafts collection at 15 locations. The deal with the library system also includes some regular programs.