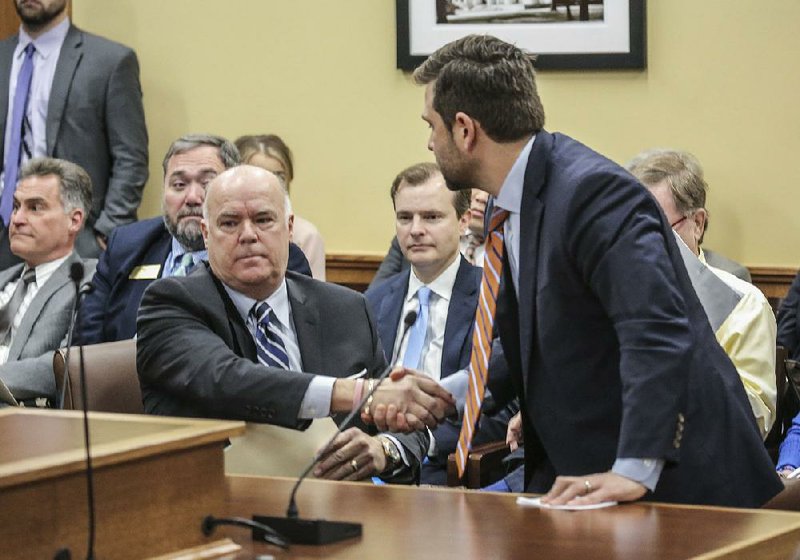 But its foes decried granting tax breaks to the wealthiest residents when Arkansas has other, more pressing needs.

House Republican leader Marcus Richmond of Harvey said afterward that Republicans are short of the required 75 votes for approving the legislation in the 100-member House. The House has 76 Republicans and 24 Democrats.

Hutchinson's latest tax-cut plan would trim the top individual rate from 6.9 percent to 5.9 percent over a two-year period. It is projected by state officials to reduce tax revenue by $97 million a year after it's fully implemented.

In a 15-2 roll-call vote, the House Revenue and Taxation Committee recommended House approval of Senate Bill 211 by Sen. Jonathan Dismang, R-Searcy. Fifteen Republicans backed the bill, while Democratic Reps. Monty Hodges of Blytheville and Tippi McCullough of Little Rock dissented. Rep. Dan Douglas, R-Bentonville, didn't take part in the roll-call vote, although he dissented in a voice vote. Two other Republicans on the committee were not at the meeting.

The committee endorsed the bill after it rejected in a voice vote an amendment, proposed by House Democratic leader Charles Blake of Little Rock, that would limit the rate reduction to people who make less than $456,000 a year in taxable income.

"I am not comfortable with a $97 million tax cut when the top 1 percent gets about $75 million of those tax cuts," Blake told the House committee, referring to those who make more than $456,000.

But Paul Gehring, a state assistant revenue commissioner, said the proposed amendment to SB211 would save only about $28 million a year.

After the committee's endorsement, Hutchinson said, "I appreciate the overwhelming vote by the members of the House Revenue and Taxation Committee as they passed the 5.9 tax plan to the House floor for consideration.

"I am grateful for representatives, whose leadership in the House has moved us one more step in the right direction to accomplish common-sense tax reform for all Arkansans," the governor said in a written statement.

SB211 cleared the Senate a week ago in a 28-5 vote after it fell two votes short of approval on the previous day.

If enacted, the bill would be the third cut in individual income tax rates since Hutchinson became governor in January 2015. The others reduced lower- and middle-income taxes.

In 2015, the Legislature enacted Hutchinson's plan to cut the rates for people with between $21,000 and $75,000 a year in taxable income. State officials projected that cut would reduce revenue by about $100 million a year.

In 2017, the Legislature approved Hutchinson's plan to cut the rates for people with up to $21,000 a year in taxable income. State officials forecast that tax cut would trim revenue by $50 million a year. The cut took effect on Jan. 1 of this year.

The current top rate of 6.9 percent applies to people with at least $79,300 a year in 2018 taxable income. The finance department expects that figure to "move to approximately $80,500" when adjusted for inflation this fall, agency spokesman Scott Hardin said.

Most businesses in Arkansas are pass-through organizations such as liability corporations and profits, and taxes on those profits, flow directly to the owners' individual returns, he said.

"This will alleviate the tax burden for many businesses in Arkansas," Zook said. "Most relatively small and growing businesses, the ones that we want to thrive and do well and hire more people and invest more capital, etc., and grow" will benefit from the cut.

"All of this adds up to a more competitive state that will be more attractive to investors, business owners, companies that are looking to locate and expand and grow and serve our people and serve our markets and serve the rest of world with products made and exported from Arkansas, so this is a good thing for the business climate in Arkansas," he said.

But Bill Kopsky, executive director of the Arkansas Public Policy Panel, told the House committee, "The governor's proposal takes Arkansas' upside-down tax system when you tax poor people at almost twice the tax rate that we tax our wealthiest and it makes it worse.

"We think that tax reform should be focused on bringing relief to the pure structural problems in our tax system and this bill simply does the exact opposite of that," he said.

Kopsky said low-income and working families have received tax cuts in previous years, "but the relief they have received has been marginally peanuts, and this bill is a fat steak for the top 1 percent in terms of total savings.

"We have the third-highest sales tax in the country. If we want to talk about making our tax system more competitive, we should maybe focus on the sales tax instead of the top 1 percent's income tax," he said. In total, two people testified for the bill, while four others testified against it.

About 579,000 taxpayers would receive a tax cut under SB211, the finance department estimated.

Afterward, Rep. Joe Jett, R-Success, who is the House sponsor of SB211, said he plans to ask the House to approve the bill Thursday.

"We had a no from a Republican today, so I think we still got to do some work and see where we are at," Jett said.

Richmond, the House Republican leader, acknowledged the bill doesn't have enough committed votes from Republicans to win approval in the 100-member House.

The bill requires a three-fourths vote for approval in the House because it would increase individual income tax rates on about 213,000 taxpayers, though they wouldn't be hit with an overall increase, according to state officials.

"We've still got some ground we got to cover here before we get to a point where we pass this with a supermajority," Richmond told reporters. "At this point with the numbers I have and the count that I just have recently got, we couldn't pass the tax cut bill in the House.... But I think that people are beginning to listen and kind of come off the hard 'no' to a more reasonable, 'Well, what about this type of thing.' Hopefully, we can get there."

"This place is like a wind sock. You never know which direction it is going to go. It just depends on the wind at the time," he said.

Douglas said he opposes SB211 at this point because "I feel like we have a lot of needs in the state that have not properly [been] met yet" and he wants more information about the planned cost savings from the governor's plan to cut the number of state agencies reporting to him from 42 to 15.

In addition, "I feel like the governor's highway plan he announced [Monday] is kicking the can down the road," he told reporters.

"As far as the half-cent sales tax [used for highway funding], the Highway Department won't see any money of that available to go towards road maintenance or construction ...until basically 2024. That's five years down the road."

Hutchinson on Monday asked lawmakers to refer to voters a permanent extension of the half-percent sales tax for highways, approved by voters in 2012 for a 10-year period starting in 2013.

But Richmond said, "There is a desire to move that half-cent [extension] back and have it referred like in 2022 or something like that, just later instead of having all this pile in at one time, just because of optics of it." 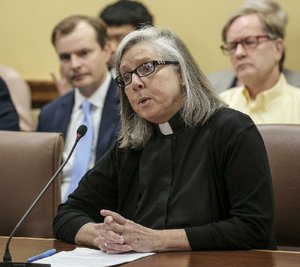 Photo by John Sykes Jr.
The Rev. Gail Brooks of Canvas Community Church in Little Rock speaks against the tax-cut bill Tuesday at the Capitol. Opponents of the measure say the state has more pressing needs.