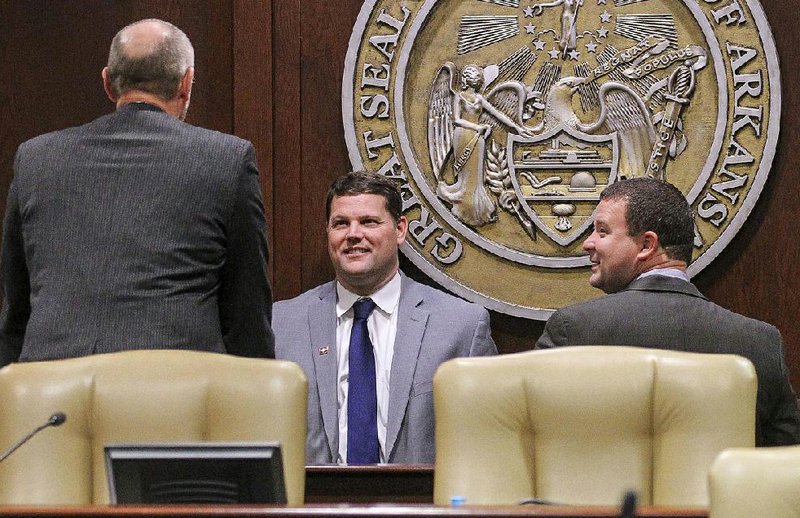 A House committee on Wednesday recommended a bill that would limit special elections to two dates a year or on the same days as normally scheduled elections.

House Bill 1402, sponsored by Rep. Justin Gonzales, R-Okolona, is meant to answer the historically low voter turnout at the polls for special elections, which are typically held to raise local taxes, Gonzales told members of the House State Agencies and Governmental Affairs Committee.

"Personally, I really don't care if you pass a sales tax on yourself or not. That's not my concern. My concern is very few people have a say in these, actually show up and express their concerns, when you have these at odd times," Gonzales said. "I think that's why you see so many of them pass when they're held on odd days. Only the people who are supportive of it actually show up and vote."

The bill passed the committee on a voice vote with audible dissents from several lawmakers.

Representatives of the Association of Arkansas Counties as well as the Arkansas Municipal League spoke in favor of the bill.

Currently, Arkansas law 7-11-304 allows a special election on the second Tuesday of any month except in a month in which a preferential primary, general primary or general election is held.

In an off year, the special election would be held in May or November on the Tuesday after the first Monday.

HB1402 would not apply to elections to fill office vacancies, runoff elections or special elections otherwise required by law.

The bill would allow emergency elections on any date under special circumstances, such as a court ruling that would render the government incapable of performing its duties or obligations; natural disasters; to address an imminent danger to public health and safety; or if delaying the special election would cause a substantial and undue hardship to the governing entity.

Annual school elections, which have moved from September to either May and November, are not affected by HB1402.

Gonzales countered that HB1402 would give the entities "plenty of time" to plan for a special election should the need arise.

Rep. Andy Davis, R-Little Rock, pointed out that voter turnout was significantly low for that special election, with 6.5 percent of Little Rock's voters turning out.

"I've always been opposed to this because I think local cities, libraries, they have a lot of things that they have to consider when they're trying to set a date and vote on whatever the issue is," Ladyman said. "I think the reason the turnout is low is because it's just not at a good time. It never is at a good time. I'm just not convinced that it's going to help the numbers."

"I think that to hold special elections on the week after Fourth of July or something like that, is intentionally suppressing the vote," Payton said. "I appreciate Rep. Gonzales bringing this forward and I ask you to vote for it because I think a 'No' vote is voting in favor of voter suppression."