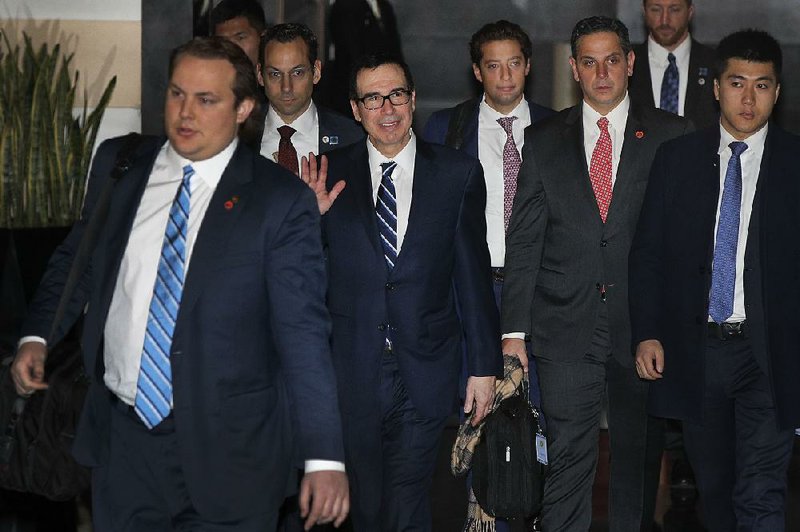 U.S. Treasury Secretary Steven Mnuchin (center) waves to journalists Wednesday, as he and part of his trade delegation leave a hotel in Beijing, where he and U.S. Trade Representative Robert Lighthizer will begin high-level trade talks with China today.

"I think it's going along very well," Trump told reporters in the Oval Office. "They're showing us tremendous respect."

Negotiators from the two countries began their latest round of talks this week in Beijing ahead of the March 1 deadline for additional U.S. tariffs on Chinese goods. Trump has threatened to more than double the rate of duties on $200 billion in Chinese imports.

Trump said Tuesday that he's open to extending the March 1 deadline if the two sides are near an agreement.

After the deadline, a 10 percent tariff imposed in July on $200 billion of Chinese imports would rise to 25 percent.

Businessmen and economists say the two days of high-level talks starting today allow too little time to resolve a dispute over Beijing's technology ambitions that threatens to put a drag on weakening global economic growth. Experts believe China's goal is to make enough progress to persuade Trump to extend his deadline.

There are few signs of movement on the thorniest issue: Washington's demand that Beijing scale back its efforts to become a world leader in robotics and other technologies. China's trading partners say the state support for industries violates Beijing's market-opening obligations, and some American officials worry those efforts might erode U.S. industrial leadership.

This week, China wants "to see the threat of additional tariff imposition being removed for as long as possible" with minimal conditions attached, said Louis Kuijs of Oxford Economics.

Companies on both sides have been battered by the U.S.' tariffs and retaliatory duties imposed by the government of Chinese President Xi Jinping. The stakes are rising as global economic growth cools.

Trump raised tariffs on Chinese goods over complaints that Beijing steals or pressures companies to hand over technology. The dispute has spread to include Chinese industry-development plans, cyberspying and the countries' lopsided trade balance.

Chinese leaders have offered to narrow their trade surplus with the United States. But they have balked at making major changes in development plans that they see as a path to prosperity and more global influence.

"China will continue resisting U.S. demands in certain areas, such as changes to its industrial strategy and the role of the state in its economy," said Eswar Prasad, a Cornell University economist who was head of the China division at the International Monetary Fund.

Chinese officials reject complaints that foreign companies are required to hand over technology. But business groups and foreign governments point to rules that they say compel companies to disclose trade secrets or share technology with state-owned partners.

Chinese officials also are balking at U.S. pressure to accept an enforcement mechanism to monitor whether Beijing carries out its promises, Kuijs said.

"They feel that it is humiliating for China," he said.

The U.S. delegation is led by Trade Representative Robert Lighthizer, who has said his priority is Chinese industrial policy. He is accompanied by Treasury Secretary Steven Mnuchin.

The Chinese side is led by Vice Premier Liu He, Xi's top economic adviser. It will be his second meeting with Lighthizer, after last month's talks in Washington.

Business groups and economists say the decision by the top trade envoys to participate suggests the talks might be making enough progress to require higher-level political decisions.

Their deputies have met since Monday to make preparations. On the American side, that includes Jeffrey Gerrish, a deputy trade representative, and David Malpass, a Treasury Department undersecretary who is Trump's nominee for World Bank president.

China has tried to deflect pressure by emphasizing its growth as an export market. It has announced a series of changes over the past year to open finance and other fields, including allowing full foreign ownership in its auto industry for the first time.

Regulators have announced plans to improve protection of foreign patents and copyrights. But it is unclear whether that will satisfy the U.S. and other governments that complain the system is designed to extract technology from foreign companies and to use official industrial standards to shield Chinese enterprises from competition.

Negotiators have said any final agreement will have to be made by Trump and Xi. Trump said last week that they plan to meet, but not before the March 1 deadline.

The Hong Kong newspaper The South China Morning Post reported Monday that the meeting could take place in late March on the southern Chinese island of Hainan.

Information for this article was contributed by Justin Sink of Bloomberg News and by Joe McDonald and Paul Wiseman of The Associated Press.