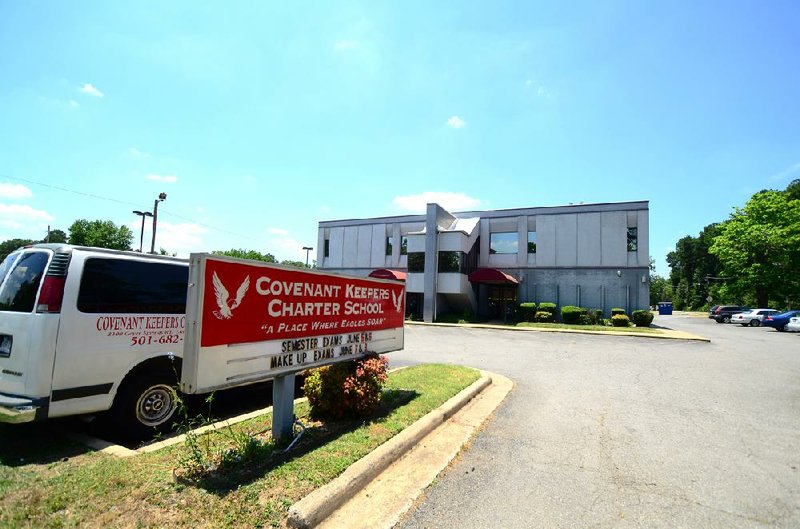 The state Board of Education on Friday voted to immediately revoke Covenant Keepers College Preparatory School's state-issued charter after learning that unauthorized withdrawals from the school's bank account had left the school's sponsor without enough money to operate.

To accommodate most, if not all, of Covenant Keepers' 104 sixth- through eighth-graders and their teachers, the Education Board also on Friday agreed to amend Friendship Aspire Academy's state-issued charter -- to expand the grades it can serve and its enrollment cap -- enabling it to serve the Covenant Keepers pupils.

Covenant Keepers at 5612 Geyer Springs Road was closed to students Friday for previously scheduled parent conferences, and it will be closed Monday for a federal and state holiday.

The Geyer Springs Road campus will be opened for the last time Tuesday through Friday, Friendship Aspire leaders told the Education Board. During that time, pupils and their parents will be able to tour the Friendship Aspire campus at 3615 W. 25th St., in preparation for former Covenant Keepers' classes to begin at the new campus Feb. 25.

The two campuses are about 7 minutes and 1.8 miles apart.

School bus transportation will be provided for Covenant Keepers pupils to the new school.

Friendship Aspire, in the former Garland School in the Little Rock district, has been extensively renovated in preparation for opening in August to kindergartners and first-graders.

For Covenant Keepers pupils and families who choose not to enroll at the Friendship Aspire campus, Arkansas Education Commissioner Johnny Key said Friday that state agency staff members will be at the Geyer Springs campus next week to help families select other schools in which to enroll their children.

Those school options include nearby middle schools in the Little Rock district as well as other charter schools such as Exalt Academy or Little Rock Preparatory School.

Shutting down a publicly funded charter school in midyear is rare but not unprecedented in Arkansas. The state previously shut down Urban Collegiate Charter School for Young Men in the middle of the year. All open-enrollment charter schools in the state must have state-issued charters, or contracts with the state, to be able to receive state funding to operate.

Covenant Keepers, sponsored by the nonprofit City of Fire Community Development Inc., had in January agreed to the voluntary nonrenewal of its charter at the end of the current school year, June 30. There was an attempt to negotiate a transfer of the Covenant Keepers charter to Friendship Education Foundation -- sponsoring organization for the Friendship Aspire Academy -- but that failed.

The Friendship Education Foundation has, however, been the day-to-day manager of the Covenant Keepers campus this school year based on a memorandum of understanding between it and City of Fire.

Valerie Tatum, Covenant Keepers' founder in 2008 and its longtime superintendent, had resigned from the school in the fall.

Tatum earlier this week declined to comment, saying only that she wanted to talk to her lawyer.

No one spoke on behalf of Covenant Keepers during the Education Board's special meeting on Friday.

Mary Claire Hyatt, an attorney for the Education Department, on Friday detailed for the board the events that led up to the immediate revocation of Covenant Keepers' charter.

Between Jan. 16 and Jan. 25, three withdrawals were made totaling $176,472.93 from the school's operating account "without the approval of the current operator or the local board," Hyatt said. "These withdrawals were not discovered until the business manager attempted to reconcile January's bank statements on Friday, Feb. 8."

The state Education Department was notified and the agency placed a hold on the operating account and the current operators of the school -- Friendship Education Foundation -- notified the City of Fire board of directors and asked for a special meeting.

The Education Department immediately received letters of resignation from all but one member of the City of Fire board, said Hyatt who distributed resignation letters to the Education Board.

"I find myself unable to keep up and understand what is truly going on with this board and school," board member Arnessa Bennett wrote in her resignation letter.

Lynda P. Johnson wrote that she joined the board because she was an experienced educator who thought she could offer research-based strategies to the struggling school but she said board membership at a time when the charter transfer from one organization to another was in the works "appears to be too controversial."

While the Friendship operators were attempting to put together the documentation to help the Education Department release funds for payroll, it was discovered that on the afternoon of Feb. 8 -- prior to the freeze on the account -- there was another withdrawal of $12,433. That was done without the approval of the current operator or local board, she said.

That left $15,461.41 in the account. Additionally, on Jan. 14 and in early early February, there was an unknown amount of inventory removed from the Covenant Keepers campus without the knowledge of the school's operator.

Hyatt said the $15,000 in the school account was sufficient to cover most of the payroll for this past Friday. However, within the next week, counting the payroll, there are more than $44,000 in bills to be paid. That includes contributions to the state retirement system, taxes, food service and an after-school program.

Hyatt said the state has the authority to take control of and sell the school's assets to pay those and other forthcoming bills. But if the assets aren't sufficient, the vendors will go unpaid.

The next distribution of state funding for the Covenant Keepers students will be Feb. 22, Greg Rogers, assistant commissioner for finance, said.

Harris of the Friendship Education Foundation told the Education Board that his organization's goal is to minimize the disruption for students.

The foundation's written transition plan says the Friendship school has 10 classrooms, science and computers laboratories, a special-education room, playground, cafeteria and administration offices. The current food service provider will provide meals to students at the same rates. Student records, desktop computers, laptops, copiers and curriculum and lesson materials will be transferred to the new campus. Any equipment and furniture that is moved will be approved by the Education Department.