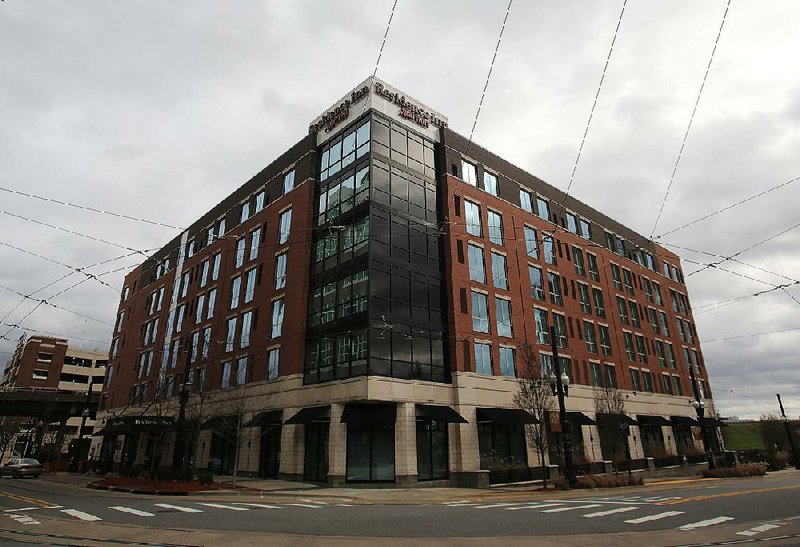 SREIT RI Little Rock assumed a loan in the original amount of $14.4 million from Wilmington Trust, National Association, as trustee for the registered holders of Wells Fargo Commercial Mortgage Trust.

The McKibbon Hotel Group Inc. of Gainesville, Ga., developed the Residence Inn by Marriott in 2013 as the first of a group of downtown Little Rock hotels. The others developed by McKibbon include the Hampton Inn and Suites and the Hilton Homewood Suites on River Market Avenue and the Courtyard by Marriott on President Clinton Avenue.

Cardinal Sherwood paid $7 million for the building at 5430 Landers Road.

Cardinal Health, which ranks among the top 25 on the Fortune 500 list and leases the facility, will continue its operations at the location with no change.

The buyer was represented by KW Commercial Calabasas of California.

"I believe all parties were very happy with this result," Hathaway said. "The property's tenant is about as financially strong as they get, and they've been operating a high-quality customer care center there for over 13 years. We were in the early stages of marketing the asset, and the buyer recognized the opportunity and acted on it before others could."

The building was originally a retail grocery store, Billings said.

"When you walk in and see the comfortable work atmosphere and the bustling office activity, you're just amazed at how the building's been transformed," Billings said.

River City is a dealership for recreational vehicles and campers at 6721 Warden Road. Store Master Funding X is based in Scottsdale, Ariz.

River City sold for $4.7 million in April, a 34 percent return on investment for the seller, FRHP Lincolnshire LLC, which is based in Lincolnshire, Ill.

Included in the sale was 4 acres of property.

When FRHP Lincolnshire bought the dealership in April, an executive with the company said it was attracted to River City because of the extremely high number of RV registrations in the area.

"We were mainly looking to expand our footprint in that area," the executive said. "We recognized the people of Arkansas love to travel and camp."

Michael Bennett incorporated Store Master Funding X in 2016 and is also a manager of the company. Other managers are Christopher Volk and Catherine Long.

The facility and 4.5 acres appraised at $4.1 million last year.

Bowman Pointe Property Investments took out a $5 million mortgage from First National Bank of Fort Smith. The loan expires in 2024.

The seller was Taylor Mercantile LLC, which soldthe gasoline station and convenience store for essentially the same price it paid in November.

Vault CS is based in Bloomfield Hills, Mich. It was incorporated by Debby Ferguson in December.

Vault CS borrowed $425,000 from Cerco Capital Inc., a financial firm based in the Bahamas.

A Little Rock general contractor will relocate, after the acquisition this month of the multi-tenant Kemp Office Building in the Riverdale area of Little Rock.

The 9,000-square-foot building, built in 2000, is at 2200 Brookwood Drive. It was purchased by Karen Cline for $1 million. Cline is married to Ernie Cline, owner of Cline Construction Group, which will move into the property's one vacant space.

Three other businesses will continue operating as tenants at the location.

The seller was the Margaret L. Kemp Revocable Trust through its trustee, Ellen Rogers, and was represented by Jamie McLarty of Hathaway Group. Mark Bentley and Justin Bentley of Colliers International represented the buyer.

"This will be a great investment and business location for the Clines," McLarty said.

CORRECTION: An earlier version of this story misstated the name of the The McKibbon Hotel Group Inc. of Gainesville, Ga.