College of the Ouachitas trustees unanimously decided to join the ASU System last week after a monthslong search to find the right university system to join.

The agreement is contingent upon the approval of the Higher Learning Commission, which is the accreditor for the state's public colleges and universities. The accreditation process is standard for mergers, Arkansas State University System President Chuck Welch said.

"There shouldn't be any issues whatsoever," Welch said.

The merger is effective Jan. 1, 2020. Located in Malvern, it will give the system its fifth community college and its first outside of the state's northeast quadrant.

The system's board of trustees gathered briefly Wednesday evening at College of the Ouachitas for a meeting that was livestreamed on Arkansas State University's Facebook page.

Before ASU System trustees met, College of the Ouachitas trustees expressed their excitement about joining the system, with one trustee noting that the arrangement will allow the college to retain much of its independence. Another noted that the ASU System's pitch had "vision" and "purpose."

People in the community refer to the college as a "diamond in the rough," but with the merger, it will be "shining," College of the Ouachitas Trustee Diana Raggans said.

The college also heard a presentation from the University of Arkansas System and spent three years exploring merging with other schools.

"It's been a lot of due diligence," said Bill Fowler, chairman of the College of the Ouachitas board of trustees.

Fowler said he believes the college can integrate courses with the system.

Arkansas State University System board of trustees Chairman Niel Crowson said many of the college's programs overlap with others in the system. The merger also will help the system reduce the costs of providing that education into the "outlying areas," he said.

"Geographically it's a good fit for ASU System in that it is a new area," Crowson said. "It doesn't encroach on any of the other two-year intuitions in the system."

There is no revised name for the college yet, although the 13-page agreement of merger and transition refers to the school as "ASU-COTO" throughout.

With the merger, the university system assumes all assets and liabilities of the college, which presumes none are currently undisclosed. A new liability could cancel the merger.

The college must also pay about $20,000 in annual system membership fees, with the first payment occurring on or before June 1, 2020.

The college cited liabilities related to its insurance as its reason for joining a system, the Arkansas Democrat-Gazette previously reported. It had $6 million in liabilities that could affect the college's ability to borrow money.

Welch told the room Wednesday that the merger was not a case of the system needing to save a college. College of the Ouachitas is already well-run, he said.

In the past several years, other colleges have merged with a university system in cost-cutting efforts. The ASU System gained Mid-South Community College in West Memphis in 2015, and Rich Mountain Community College and Pulaski Technical College joined the University of Arkansas System in 2017.

Once the transfer is complete, the change will result in the shifting of job titles and responsibilities for current college leaders.

College President Steve Rook will become the chancellor and will report to Welch and the system's board of trustees, according to the agreement.

College of the Ouachitas' board of trustees will be appointed to the college's new Board of Visitors for terms equal to the members' remaining time as trustees.

The college's "operating procedures, internal governance, and established traditions" will remain in place, including benefit packages, the agreement stipulates. Employees hired after the merger will be enrolled in the university system's retirement plans.

For students, credit will be "freely transferable" between the college and other university system campuses, although the application of credits to specific degree programs remains up to the other schools.

College of the Ouachitas had 1,167 students this fall, making it the fourth-smallest of the state's 22 public community colleges. Not counting concurrent high school enrollments, the school had 665 students, making it the second-smallest.

Every program of study had a 73 percent or more employment rate for graduates in their first year.

About 34 percent of part-time, first-time degree- and certificate-seeking students earn an award within four years, according to National Center for Education Statistics data. Completion rates are higher for full-time, first-time and for part-time, non-first-time students. 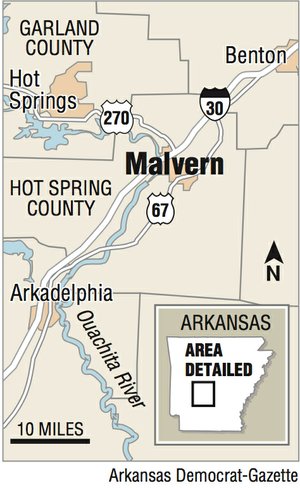 A map showing the location of Malvern