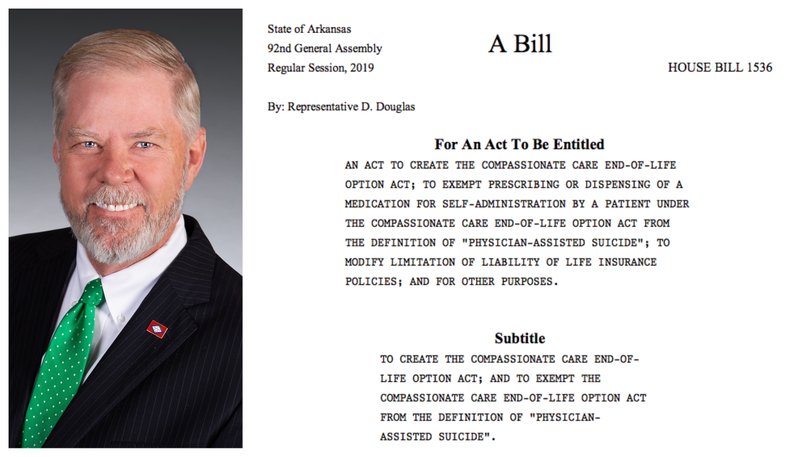 Rep. Dan Douglas, R-Bentonville, is shown beside a screenshot of his bill to allow doctors to prescribe terminally ill patients with lethal doses of medicine so the patients could end their lives.

A Northwest Arkansas lawmaker filed a bill Wednesday that would allow doctors to prescribe terminally ill patients with lethal doses of medicine so the patients could end their lives.

Should doctors in Arkansas be allowed to prescribe terminally ill patients with lethal doses of medicine so the patients can end their lives?

California, Oregon, Vermont and Washington have passed laws allowing doctors to prescribe life-ending medication to terminally ill patients, according to the National Conference of State Legislatures. A court ruling in Montana provided immunity for the practice in that state.

The sponsor of the proposed "Compassionate Care End-of-Life Option Act," Rep. Dan Douglas, R-Bentonville, could not be reached for comment Wednesday.

Jerry Cox, president of the faith-based Family Council, vowed to oppose the bill.

"A physician friend of mine described this bill as worse than terrible," Cox said. "You're literally talking about killing people."

Under the text of Douglas' bill, a patient would have to ask a doctor twice, at least two weeks apart, to write a prescription for life-ending drugs before the doctor can fulfill the request. The doctor also would have to file a report with the Department of Health upon writing such a prescription.

House Bill 1536 was assigned to the House Committee on Public Health, Welfare and Labor.