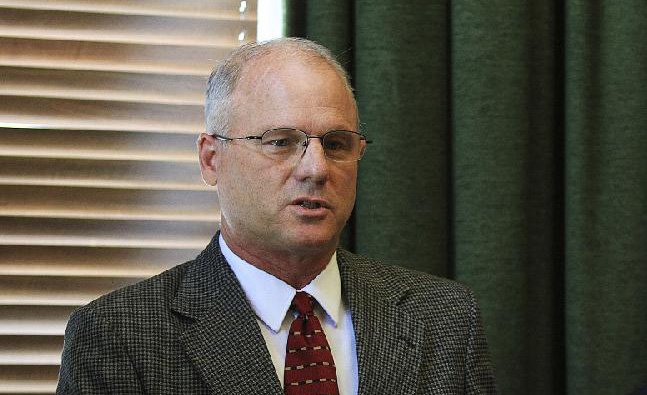 Senate lawmakers convened for an early morning discussion Thursday of a half-dozen different proposals that have been submitted to amend the Arkansas Constitution.

Together, both houses of the Legislature are able to refer up to three constitutional amendments every biennial regular session.

The meeting Thursday, which began in the Old Supreme Court room at 7 a.m., was the beginning of the process for senators to whittle down a list of dozens of proposals that were filed ahead of a deadline to do so on Feb. 14. The panel consisted of members of the Senate State Agencies and Governmental Affairs Committee.

The following joint resolutions of the Senate were considered:

• Senate Joint Resolution 1 -- To reduce the number of days that the General Assembly is in session; and to repeal the fiscal session that occurs every other year.

• SJR2 -- Providing that the state shall never be made a defendant in any of her courts unless otherwise provided by law. The Legislature now cannot change that in the state's sovereign immunity.

• SJR8 -- Permitting limits on awards of punitive and non-economic damages.

• SJR9 -- To revise the process for submitting initiatives, referendums and constitutional amendments to the voters for approval.

Two of the offerings proposed contradictory changes to the constitution. SJR1, by Senate President Pro Tempore Jim Hendren, R-Sulphur Springs, would bring an end to the biennial fiscal session and have the Legislature meet only every two years. SJR7, by Sen. Trent Garner, R-El Dorado, also would end the fiscal session, but replace it with shorter annual sessions.

Garner joked that the resolutions were the "exact opposite" of each other, though both senators said they found inefficiencies in the fiscal session. The first fiscal session was held in 2010.

Other measures, SJR6 and SJR9, both dealt with the initiative and constitutional amendment process through popular petition.

Sen. Breanne Davis, R-Russellville, proposed SJR6 after voters passed Amendment 100 last year, which authorized four casinos, including the building of one in Pope County. That aspect has drawn local opposition. Her amendment would bar future amendments from singling out counties for such purposes.

Similar language exists in SJR9 by Sen. Mark Johnson, R-Little Rock, though the measure also would limit the time period for the solicitation of signatures for petitions, and increase the threshold for approving a constitutional amendment from a simple majority to 60 percent of the vote.

Davis said afterward that she intended to move forward with her resolution as is.

Johnson told the committee members that he would be "happy to pull together other amendments" in an effort to overhaul the process for amending the constitution.

No votes were taken Thursday by the committee, which will have to meet again to consider more amendments that have been proposed.