At retreat, Catholic bishops to pray about sexual abuse 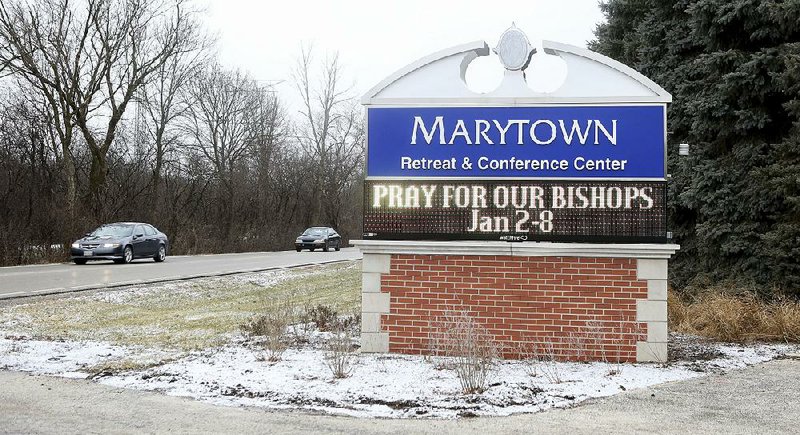 A sign at the Mundelein Seminary in Mundelein, Ill., greets Roman Catholic bishops Wednesday as they gathered for a retreat that follows blistering reports in Illinois and Pennsylvania over the church leaders’ response to sexual abuse cases.

MUNDELEIN, Ill.-- U.S.-based Roman Catholic bishops gathered Wednesday for a weeklong retreat near Chicago on the church sexual abuse scandal that organizers say will focus on prayer and spiritual reflection, and not on formulating policy.

The retreat began a day after The Associated Press reported that the Vatican blocked U.S. bishops from taking measures last year to address the scandal because U.S. church leaders didn't discuss the legally problematic proposals with the Holy See enough beforehand.

The rebuke from Rome was contained in a letter from a Vatican official before the U.S. Conference of Catholic Bishops met in November. The move stunned abuse survivors and some other Catholics demanding actions.

The retreat also is a prelude to a summit of the world's bishops at the Vatican next month to forge a comprehensive response to the crisis.

According to the Archdiocese of Chicago spokeswoman Anne Maselli, bishops gathering at the Mundelein Seminary will be praying, fasting and participating in spiritual lectures. And they will be alone: No staff members, other priests or members of the public or media are invited. Cardinal Daniel DiNardo, president of the U.S. Conference of Catholic Bishops, said in a news release that they are convening "to pray on the intense matters before us."

The Catholic seminary at the University of St. Mary of the Lake in Mundelein, 40 miles north of Chicago, is the largest of its kind in the U.S. and home to roughly 200 seminarians from about 40 dioceses across the country and globe. According to its website, the lakefront campus blends "Colonial Revival and the architecture of Renaissance Rome, joining the Roman traditions of Catholicism with American cultural traditions."

Pope Francis has dispatched Fr. Raniero Cantalamessa, the official papal preacher, to lead the retreat. And it's no accident that it's being held in Chicago, long considered a center of American Catholicism. The hosting Chicago archbishop, Cardinal Blase Cupich, was Francis' first major U.S. appointment and was picked by the pope to help organize the Vatican summit.

Cupich, who is considered a moderate, was the lead signatory on a recent letter to bishops around the world warning that a failure to deal with abuse now will jeopardize the church's mission globally. It also urged summit attendees to meet with clergy sexual abuse victims "to learn firsthand the suffering they have endured."

Cupich issued a statement expressing regret for "our failures to address the scourge of clerical sexual abuse," after Illinois Attorney General Lisa Madigan's report in December alleging that the church had failed to disclose the names of at least 500 clergy members in the state accused of sexually abusing children.

A Pennsylvania grand jury report early last year alleged that hundreds of priests abused at least 1,000 children over seven decades in that state.

Many are dismayed that it has taken so long for the church leadership to meet and act after so many years. Two advocacy groups, the Survivors Network of those Abused by Priests and Ending Clergy Abuse, held a public demonstration Wednesday in Chicago.

The Survivors Network of those Abused by Priests says it wants Cardinal Cupich removed from his prominent role in planning the papal summit, and that Cardinal DiNardo should not lead the U.S. delegation to the Rome summit.

Zach Hiner, the group's executive director, said he's glad leaders are gathering "to find ways to address this crisis, but a week spent in silent prayer is not the response the public is looking for."

"If church officials truly want to do what is best, then they should be spending this week discussing how they can best comply with independent investigations by law enforcement, or how they can compel law enforcement officials in their state to act if no such investigation has begun yet," Hiner said in an email. "At this point, regardless of what bishops decide to do in the first week of January, we are placing our hopes for reform in the hands of secular, not church officials."

Hiner was joined at the demonstration by Peter Isely, a clergy abuse victim and founding member of both groups.

He said most survivors want church leaders "to succeed at this."