Gov. Asa Hutchinson on Friday discouraged medical-marijuana patients from bringing cannabis into Arkansas from other states after patient certification cards are issued next month.

The Republican governor's comments came two days after the Arkansas Department of Health announced that it would be issuing medical-marijuana registry ID cards earlier than expected to patients with qualifying conditions.

Industry insiders expect many Arkansas patients to travel to Oklahoma, which recently opened its first marijuana dispensaries, to obtain the drug at least until April when the first Arkansas dispensary is expected to open. Oklahoma allows certified patients from other states to apply for temporary permits to buy cannabis there.

However, Hutchinson, who is the former head of the U.S. Drug Enforcement Administration, said the Health Department decided to issue the ID cards to ensure that patients can immediately purchase medical cannabis when the first Arkansas dispensary opens.

Hutchinson added that returning to Arkansas with medical marijuana, even if legally purchased elsewhere, is a federal crime and undermines the intent of Amendment 98 to the Arkansas Constitution, which Arkansas passed in 2016 to legalize medical cannabis.

Because the amendment provides regulatory framework for licensed dispensaries and cultivation facilities, Hutchinson said the amendment "presupposes" that medical cannabis be purchased from a licensed provider in Arkansas.

He said it was irresponsible for David Couch, the Little Rock attorney who composed the ballot measure that eventually became Amendment 98, to suggest that it would be fine for Arkansans to transport medical cannabis back to the Natural State.

Couch was quoted Thursday in the Arkansas Democrat-Gazette saying he wouldn't be worried about being arrested transporting medical marijuana from Oklahoma to Arkansas if he was a registered patient.

Couch said he intentionally excluded a clause from Amendment 98 that would have required the medical marijuana to be purchased in Arkansas because Congress, he expects, will eventually legalize the drug nationwide, and he didn't want to put any additional hurdles in patients' paths.

Couch added that the spirit of Amendment 98 was to include other states, pointing to a provision that protects registered patients from other states who are visiting Arkansas.

"I'm consistently saying you can break federal law," Couch said. "Is that an appropriate thing for an attorney to say? I don't know, probably not. But I'm not telling any client what to do; I'm saying what I would do.

"It's better than buying it from a drug dealer."

Federal prosecutors since 2014 have been reluctant to prosecute medical-marijuana patients and businesses in states where the drug has been legalized. Congress that year passed a provision -- the Rohrabacher-Farr amendment to an omnibus spending bill -- that prohibited the U.S. Department of Justice from spending money interfering with state medical-marijuana laws.

The provision has been included in subsequent spending bills, but it expired Dec. 21 along with the short-term spending agreement that led to the current partial federal government shutdown.

A spokesman for the U.S. attorney's office for the Western District of Arkansas declined to comment when asked whether the office would prosecute registered patients who transport medical marijuana into Arkansas, noting that it was a new issue in need of further consideration.

Under Amendment 98, registered patients or their caregivers may possess up to 2.5 ounces of usable marijuana.

While the amendment doesn't include language that would require the drug to be purchased in Arkansas, the Arkansas Medical Marijuana Commission included such a requirement in its rules.

Couch has argued that the commission doesn't have the authority to make such a rule because its jurisdiction extends only to licensing growers and dispensaries.

"Arkansas State Police is prepared to enforce all applicable state laws related to the transport of medical marijuana by licensees," he said.

Hutchinson said Friday that if medical cannabis could be purchased anywhere, it would undermine the investments of medical-marijuana businesses in Arkansas and encourage the development of the black market.

"There's a reason we have laws, and we're under the rule of law," Hutchinson said.

On Friday, 6,764 patients had been approved by the Health Department for registry ID cards. The cards are issued to those who have been certified by a doctor to suffer from one or more of 18 qualifying conditions.

The cards require a $50 application fee, and they must be renewed yearly for $50.

The state Medical Marijuana Commission issued the first five cultivation permits in July, and those companies are constructing their greenhouses.

The commission has a meeting scheduled for Wednesday to review a consulting firm's scores of the 200 applications for 32 dispensary licenses. It could vote to validate those scores at the Wednesday meeting. 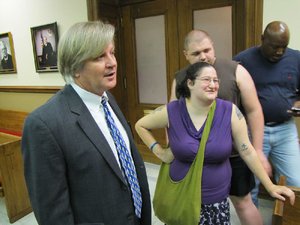 Attorney David Couch and Occupy Little Rock member Kaitlin Lott speak after a hearing Friday to determine whether Lott and fellow Occupy member Adam Lansky will get on the ballot in the Little Rock city director elections. 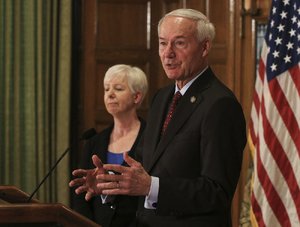 Photo by Staton Breidenthal
Gov. Asa Hutchinson (right) speaks Friday along with DHS Director Cindy Gillespie about changes in the juvenile justice system, including the closing of two treatment centers.