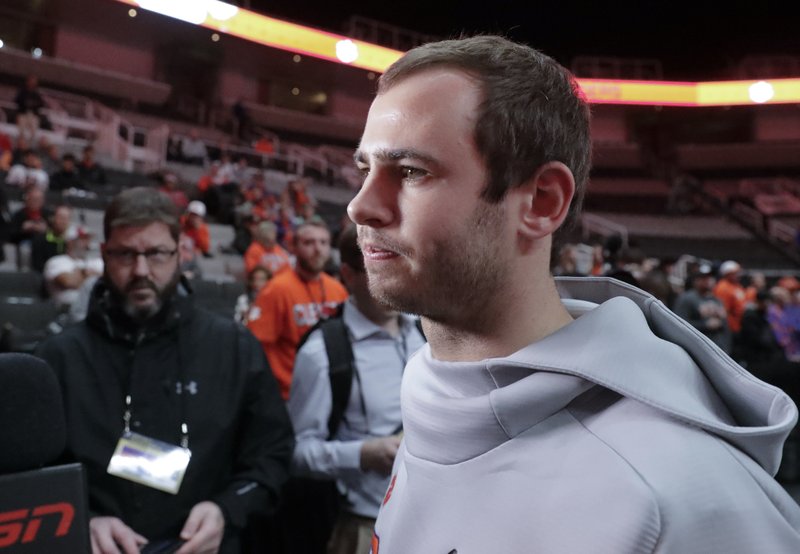 SAN JOSE, Calif. -- Hunter Renfrow is not sure even he would believe his story if he read it somewhere: The smallish, walk-on receiver overlooked by nearly everyone becomes the biggest man on campus with his catch to win a national championship.

Renfrow is even marrying the homecoming queen.

The five-year college grind for the 5-foot-10 Renfrow is nearly over. He will play one more national championship game when No. 2 Clemson (14-0) faces No. 1 Alabama (14-0) in Santa Clara, Calif., tonight.

Renfrow was a quarterback at Socastee High near Myrtle Beach, S.C., who attracted almost no attention at the FBS level. He came to Clemson in 2014 and believed he was good enough to play. Tigers Coach Dabo Swinney, a onetime walk-on receiver at Alabama, took one look at his breakaway speed and precise route running and agreed.

On a team in 2015 with future NFL receivers Mike Williams, Charone Peake, Artavis Scott and Deon Cain, it was redshirt freshman Renfrow who got regular turns in the slot and quickly earned a spot as one of quarterback Deshaun Watson's favorite targets.

But it wasn't until the national title game three years ago against the same Crimson Tide where Renfrow's profile took flight after he caught two touchdown passes -- against a secondary that included NFL defensive backs Marlon Humphrey and Minkah Fitzpatrick -- in Clemson's 45-40 loss.

Renfrow had two more TD catches against Alabama a year later, the last a 2-yard grab with a second left that lifted the Tigers to a 35-31 title win.

Renfrow led Clemson with 60 catches in 2017 and had a third matchup with Alabama, a CFP semifinal, in the Sugar Bowl. The Tigers' offense struggled throughout the 24-6 Tide victory, although Renfrow had five catches for 31 yards.

Renfrow won the Burlsworth Trophy, which was named after former Arkansas Razorback Brandon Burlsworth and goes to a top player who began his college career as a walk-on.

In the three games against Alabama, Renfrow has caught 22 passes for 211 yards and 4 TDs -- none of those scores bigger than the final catch two years ago. Renfrow was on the cover of Sports Illustrated and his folksy tales about sitting with several Clemson players for a meal and having someone ask, "Oh, do you play football, too?" gradually faded away as he became a face of the franchise.

"It impacted my life and showed me that dreams can come true," Renfrow said.

Those dreams may not be over.

Renfrow is locked into making one last impression in his final college game before training for the NFL. His speed and knack for finding the open space make him a perfect fit for those NFL teams -- the New England Patriots come to mind -- who utilize a slot receiver who can get downfield in a hurry.

Clemson co-offensive coordinator and receivers coach Jeff Scott has tutored players' rooms that have included first-round NFL picks DeAndre Hopkins and Sammy Watkins. He is convinced that pro evaluators will like what they see from Renfrow.

"I've been telling them about Hunter since he was a sophomore," Scott said. "I can't wait for the [NFL] combine and [Clemson] pro day to be able to share some more insight. There's no doubt about it."

Scott said Renfrow's gifts of quickness and sense of moment can't be taught. "Everybody at that level runs well," Scott said. "The guys that can separate and get open, those are the guys that you're looking for. He's proven it year in and year out against the best teams in the country."

Renfrow has heard all the cracks about him being a "17th-year senior," and laughs at a Twitter post of him alongside young Clemson Coach Danny Ford, who led the Tigers' first national champions in 1981.

"My teammates have given me a bunch of grief for it," Renfrow said. "But I'm just ready to have fun this last game."

Renfrow is confident he can succeed at the next level, too. He'll play in the Senior Bowl later this month, then continue preparing for his workouts at the combine and Clemson's pro day. He has loved every minute of his experience and has developed a mentality that he will make those not paying attention take notice.

"You get what you earn," Renfrow said. "I may not have been recruited high, but I earned it on the field." 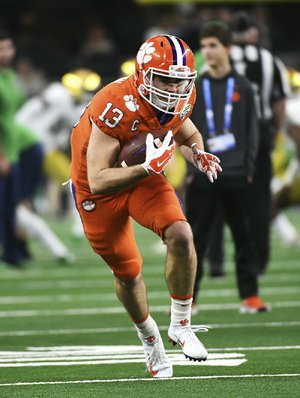