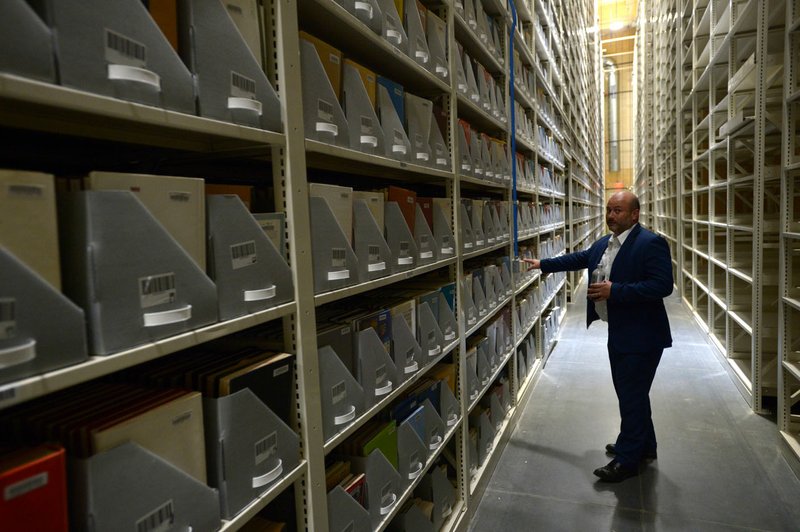 NWA Democrat-Gazette/ANDY SHUPE Marco De Prosperis, assistant dean of finance and administration at the University of Arkansas, explains Friday the archival and catalog system in a storage facility south of Martin Luther King Jr. Boulevard in Fayetteville. The proper place for books in a space-starved library at the University of Arkansas, Fayetteville has become the subject of some debate after an email sent to faculty by an outgoing librarian urging them to fight against changes that are removing roughly two-thirds of printed materials.

FAYETTEVILLE -- With fewer books on hand, the main campus library at the University of Arkansas, Fayetteville has seen a decrease in items checked out and also fewer patrons walking through the doors in recent months.

Rows of empty shelving in Mullins Library await removal as the university prepares for an estimated $16.5 million renovation aimed in part at providing greater space for study areas without expanding the library's footprint.

The plan's early phase this past summer involved moving the majority of the approximately 1.2 million books and other bound print materials previously at Mullins Library to a newly built storage facility about three-fourths of a mile from the main campus.

The move is not meant to be temporary. Staff members on weekdays make trips four times daily to bring requested books to patrons as part of a rethinking of available space to create more study rooms and areas, said Kathleen Lehman, head of user services for UA libraries.

Mullins Library now holds about 219,260 printed items, not including government documents, Lehman said, with the change happening as UA and other universities report years of dwindling demand for books and other physical materials.

Annual circulation for all UA libraries dropped about 49 percent in academic year 2016-17 compared with four years earlier, with 30,765 initial circulations in 2016-17, according to annual library statistics published by UA. The trend took place even as undergraduate student totals increased by about 2,200 over the same time period.

Since the transfer of materials from Mullins Library, totals for the five months ending 2018 showed about an 18 percent decrease in checkouts compared to those same months in 2017, according to what Lehman described as "very rough numbers."

The five-month totals, unlike the published annual totals, include the circulation of items held on reserve for specific classes and materials checked out by other librarians, among other differences, Lehman said.

Rather than showing libraries to be less important, Lehman said, the wealth of information available online or electronically means that libraries and librarians have changed from "less of a kind of keeper of books" to "more of a guide and navigator to the information."

"I know we're still helping people get the information that they need," Lehman said.

"In a transition phase, it's not as welcoming as it was or as it will be. It's always that way for renovations," Lehman said.

Mike Johnson, UA's associate vice chancellor for facilities, in an email said the empty shelving will be removed this upcoming spring semester from the library's third and fourth floors, citing information from the university's engineering and construction director, Daniel Clairmont.

The renovation project, which also involves the removal of asbestos, will have construction expected to begin not sooner than the summer, according to Johnson, with an estimated completion date of December 2020.

Johnson, citing information from Clairmont, said the new off-site storage facility has an estimated project cost of $15.3 million, including $2.2 million to relocate books and other items from Mullins Library.

The university enrolled 23,386 undergraduate students and approximately 4,000 graduate students this past fall. The four-level Mullins Library opened in 1968 and was expanded in 1997, when UA enrolled about 14,000 students.

UA student Zach Pledger described a welcome change when it came to studying for finals.

"I study in the library every semester. And this past semester was the first Finals Week that I've noticed the library not being completely packed," Pledger, 26, said in an email.

Pledger previously signed an online petition seeking to keep materials on shelves for browsing. Pledger, a senior studying mechanical engineering, was one of about 5,000 to sign a petition begun in late June.

"The school promises improvements are coming to the library," Pledger said. "If this is in fact true, then moving the books was probably worth it."

For September through December, UA transferred 2,745 items from the off-site storage facility to a campus library as requested by patrons, according to data from Lehman.

An even greater number of items were delivered electronically, with staff at the storage facility able to scan a chapter or small portion of a text and email it to a patron, Lehman said. A total of 3,482 such items were delivered to patrons via electronic retrieval over the same time period, according to data from Lehman.

She said this past fall Mullins Library hosted fewer guided tours for groups of freshmen, possibly contributing to the drop in the library's "door count."

After the renovation, "I would think and I would hope and I would expect that it would go up, because more spaces will be more inviting," Lehman said.

And the space, once finished, might allow for additional books, Lehman said.

"Once renovations are done, part of our plan is to let the collection grow more here [in Mullins Library] because we'll have more shelf space" compared to what's available currently, Lehman said.