Hogs must get Gafford more shots to excel 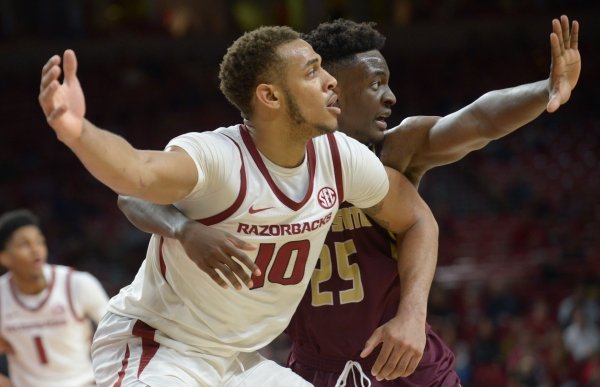 Arkansas forward Daniel Gafford (center) posts up for the ball as he is guarded Texas State forward Alonzo Sule Saturday, Dec. 22, 2018, during the second half in Bud Walton Arena. Visit nwadg.com/photos to see more photographs from the game. ( Andy Shupe)

It was a close game that wasn't decided until the final seconds, but the University of Arkansas' win at Texas A&M was not especially entertaining, not that it has to be.

Winning is the most important thing, and that's what the Razorbacks did 73-71 after freshmen Isaiah Joe and Desi Sills made three free throws in the final 27 seconds.

Much of Arkansas' success Saturday was because of its defense. The Aggies shot 41 percent from the field and just 20.8 percent on three-pointers. Hold a team to 5 of 24 from behind the arc and you have a chance to win.

When better competition arrives, Arkansas should use Daniel Gafford more frequently. Arkansas' best player took 11 shots against the Aggies, but he had six offensive rebounds. Another way to look at that is the Razorbacks are not going inside-out enough.

When Nolan Richardson had Corliss Williamson, everything went through Williamson.

Mike Anderson, an eternal optimist, likes for all his players -- all of them -- to have the green light. All 10 who saw action Saturday took at least one shot, and it appears most of them think they are deadly from behind the three-point line. With that green-light mentality, the Hogs are going to have issues with better teams.

Texas A&M was picked to finish 12th in the SEC on the NCAA's official website. Arkansas was selected at No. 11, which would explain why the game wasn't very entertaining. There were 42 combined missed three-pointers, 20 missed free throws, 44 fouls and 80 missed field goals.

The Razorbacks are 1-0 in SEC play because they played better defense. If it was up to the offense they ran, they might have lost.

In the second half, the Hogs attempted 34 shots -- 19 of which were threes, of which they made only 5, or 26 percent. Gafford got five shots.

Try that against Tennessee, Kentucky, Auburn, Alabama, Mississippi State or even LSU, and you've got a loss instead of a win.

One positive about this team is the players really seem to like and respect each other. There is a chemistry that was missing from last year's team, which had two real shooters and one who thought he was a shooter.

Jalen Harris is a true point guard, something missing from last year's team, and against the Aggies he had nine assists and zero turnovers. Harris, who according to the media guide is 22 years old, transferred from New Mexico and sat out last year. The math does add up if he didn't graduate from high school until he was 19.

Joe and Sills played summer ball for the Hawks and traveled all over the country playing in some of the biggest AAU tournaments against many of the same players they will face in SEC play. They are accustomed to big-time basketball. Sills came off the bench to score 14 against the Aggies.

Adrio Bailey, a junior, started 16 games last season, and his defense and active play make him an Anderson favorite.

Mason Jones also started Saturday and hit 3 three-pointers late to put the Hogs in the lead. He has a shooter's mentality, and the 0 of 7 start didn't faze him.

Arkansas' bench had 22 points, which is a positive.

But the biggest positive is Gafford, a 6-11 dunking machine who needs more than 11 shots.

Anderson has said everything needs to go through Gafford, and he's right if this team wants to get more wins.

Print Headline: Hogs must get Gafford more shots to excel