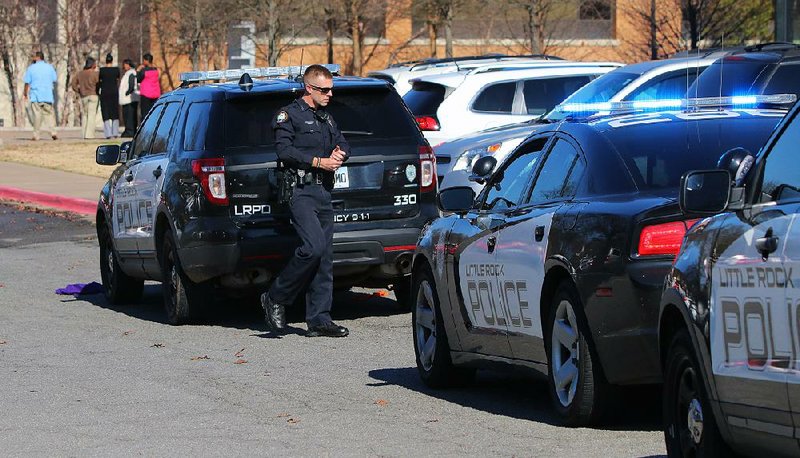 Pulaski County Circuit Judge Leon Johnson cleared the way Monday for testimony from an eyewitness to the January 2017 drive-by shooting at the state Health Department about how she came to recognize the defendant, Tiara Sharae Higgins.

Higgins, 23, of Little Rock was arrested on charges of first-degree battery, unlawful discharge of a firearm and three counts of committing a terroristic act about two weeks after 35-year-old Caleb McClain was wounded in the shoulder during the lunchtime shooting in the agency's parking lot.

Witnesses said the shooter, driving a silver Honda Accord, appeared to be aiming at a group of women and children in the West Markham Street lot.

Higgins is set to stand trial next month. She faces 120 years in prison.

She was arrested because one of the women in the group, 29-year-old Laquesia Shaniece Cooley of West Memphis, saw Higgins shooting and recognized her, Little Rock detective Angela Everett told the judge on Monday.

Cooley, who was at the department to pick up a birth certificate for her nephew, said that she didn't really know Higgins, but that Cooley's sister, Japonica Bailey, and Higgins had been feuding for years, the detective testified.

Everett was testifying at an evidentiary hearing because Higgins' attorney, Bobby Digby, disputed the legality of Cooley's identification of Higgins as the shooter.

The judge, siding with deputy prosecutor Jennings Morgan, also rebuffed a defense argument that police had illegally searched Higgins' car. Police seized a bullet and a shell casing from the vehicle, along with Higgins' driver's license and cell phone. Investigators came across the car while searching for Higgins in the immediate aftermath of the shooting.

Digby said police were wrong to tow the car before getting a search warrant. Detectives did get a warrant to examine the vehicle after they had it secured.

Morgan said that police were justified in seizing the car when one of the officers saw the bullet casing in the vehicle while searching for Higgins.

The judge said that he found nothing wrong with the seizure, but that he might reconsider after further study of case law presented by the defense.