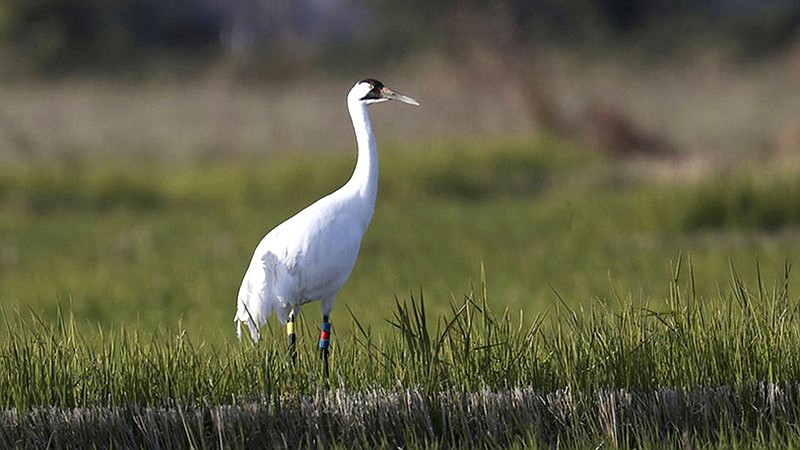 A rare visitor from the coastal marshes took an extended break in Arkansas during the current duck season.

A whooping crane, one of the most recognized birds listed on the federal register of endangered species, spent the last three months bouncing around east Arkansas, primarily in fields between Roe and Aberdeen in western Monroe County.

The female crane, labeled L4-17, has been a bit of a nomad during the last year, spending time in Louisiana, Alabama, Mexico and Oklahoma before settling into Arkansas last October.

The crane was first located by transmitter in Arkansas near Hartman on Oct. 5, according to dates provided by Louisiana wildlife officials. She then hopped around, being seen near Lake Dardanelle and the shore of Lake Atkins before settling in at a rice field between Roe and Aberdeen in Monroe County from mid-October until mid-December.

"Initially the crane's location was kept fairly quiet among birders and was only reported on an email group coordinated by the Arkansas Audubon Society," said Karen Rowe, the Arkansas Game and Fish Commission's nongame migratory bird program coordinator.

"Game and Fish has been monitoring her throughout fall and keeping a close eye on her," Rowe said, "because she decided to stay extremely close to an intersection between two highways and was very visible."

Rowe said biologists feared the crane may become stressed or pushed out of the area prematurely from bird watching pressure, but hunters and landowners in the Aberdeen-Roe area were more concerned about the crane falling victim to an illegal shooter.

They asked Game and Fish to give the location of the whooping crane to Arkansas birders hoping an influx of birders with their binoculars, spotting scopes and cameras would help keep the crane safe.

"Having observed her behavior, I felt that their suggestion was best for both the crane and the birdwatchers," Rowe said.

Dr. Mahlon Maris of Roc Roe Hunting Club was one of the conservation-minded hunters who did everything he could to keep the bird safe during her stay.

"We'd heard rumors that the crane was around, and one member who is an avid birder said he'd seen it," Maris said. "When the area's caretaker said he saw a huge wood stork with a black head, I told him about the crane and told him to let folks know that they could get in serious trouble if they messed with it. She stayed on one 40-acre field for nearly two months, eating frogs, fish and wild squash."

Whooping cranes were transported to the coastal marsh of Vermillion Parish from a captive flock at the Patuxent Wildlife Research Center in Laurel, Md. beginning in 2011.