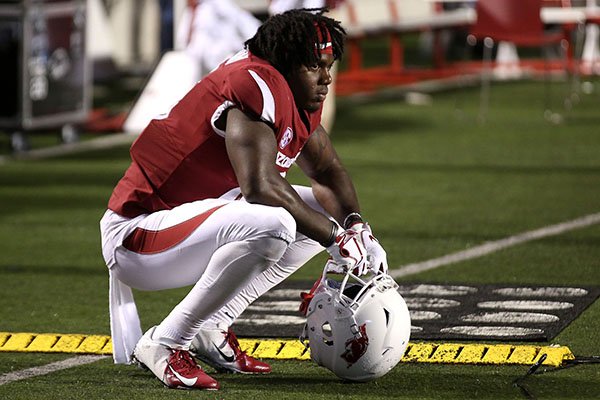 Arkansas wide receiver La'Michael Pettway (16) kneels on the sideline after the Razorbacks' 37-33 loss to Ole Miss on Saturday, Oct. 13, 2018, at War Memorial Stadium in Little Rock.

Top University of Arkansas wide receiver La'Michael Pettway announced Tuesday his plan to leave the Razorbacks and play his senior season elsewhere as a graduate transfer.

"After close evaluation of my goals as an athlete & scholar I have decided not to play receiver at the University of Arkansas in the future," Pettway wrote, in part, on his Twitter account.

"I'll continue my pursuit of my bachelors degree here at The University & graduate-transfer out to continue my athletic career elsewhere. Nothing personal, I just have to do what's best for my family and I. Thanks and God bless."

Pettway, an Alabama native who played his prep ball at Nashville in Arkansas, tied tight end Cheyenne O'Grady for the team lead with 30 catches and led the Razorbacks with 499 receiving yards in 2018. Pettway caught four touchdown passes, and he led all players who caught five or more balls with an average of 16.6 yards per catch.

Pettway's departure came one day after the first team meeting of the spring semester and continued a growing exodus under second-year Coach Chad Morris.

Jonathan Nance, the team's top receiver in 2017, announced his transfer plans after making one catch in four games last year. He wound up at Missouri.

Pettway is the 10th known player to depart the program since late in the Razorbacks' 2-10 season. That list features cornerback Ryan Pulley, who declared early for the NFL Draft; quarterback Cole Kelley; defensive backs Chevin Calloway, Nate Dalton and Derrick Munson; running back Maleek Williams; receiver Jarrod Barnes; defensive end Alexy Jean-Baptiste; and tight end Austin Cantrell, who is starting his professional career outside of football. Additionally, quarterback Ty Storey has his name in the NCAA transfer portal with the intention of finishing his senior year at another school.

Another 15 players had departed the team in the previous 13 months, including Nance, tight end Will Gragg, receivers Maleek Barkley and Kofi Boating, tight end Jack Kraus, kicker Cole Hedlund and other players who retired from football for medical reasons or grade concerns, such as receiver Brandon Martin.

Morris, speaking Monday to the Arkansas Democrat-Gazette before Pettway's intentions were announced, said he wasn't expecting further departures before the start of spring drills. He also said the number of players leaving the program is not a great concern.

"No. I think when you look at the changes across college football, it's probably pretty standard," he said.